Some daily events in the changing sky for June 29 – July 7. 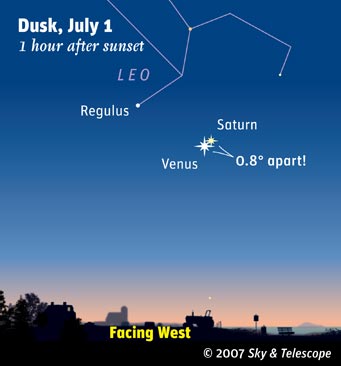 Don't miss Venus and Saturn less than 1° apart on June 30th and July 1st. Regulus looks on from their upper left. Later in the week, Saturn moves off to Venus's right.

Jupiter (magnitude –2.5, in southern Ophiuchus) is a month past opposition. It glares in the southeast to south during evening — you can't miss it. Antares, less bright, sparkles 5° or 6° to Jupiter's lower right. The two will remain evening companions all summer.

Saturn (magnitude +0.6, in Leo) begins the week in a lovely close conjunction with Venus, then moves off to Venus's right, as described above. Dimmer Regulus, meanwhile, is moving in from the upper left. Higher above them is 2nd-magnitude Gamma Leonis.

Pluto (magnitude 13.9, in the northwestern corner of Sagittarius) is not far from Jupiter in the south in late evening. Finder charts for Uranus, Neptune, and Pluto are in the July Sky & Telescope, page 60.