• This evening the waxing gibbous Moon shines below Castor and Pollux. They don't quite point to it. . . yet. Keep an eye on them as you stay up late. The Moon creeps ever eastward against the stars, and very late tonight (for North America) it aligns with Castor and Pollux perfectly.

• Capella crosses highest overhead, and Rigel stands highest in the south, around 7 or 8 p.m. now depending on where you live east or west in your time zone. Capella is at declination +46°, so it passes exactly through your zenith if you're at latitude 46° north: Portland, Oregon; Montreal; northern Italy.

• The bright Moon, not quite full, shines near Regulus all night.

• Algol should be at its minimum brightness, magnitude 3.4 instead of its usual 2.1, for a couple hours centered on 7:39 p.m. EST.

• The Moon and Jupiter shine together after they rise around the end of twilight tonight. Although they appear paired, Jupiter is currently 1,700 times farther away. And, it's 40 times larger in diameter.

Use binoculars to spot some of Jupiter's own four big moons; the easiest will be Callisto to the planet's east. They're pinpoints in binocs but roughly as big as our own Moon in reality.

Watch the Moon pull away eastward from Jupiter through the rest of the night.

• Sirius blazes its highest in the south on the meridian by about 8 or 9 p.m. now. Using binoculars, examine the spot 4° south of Sirius (directly below it when on the meridian). Four degrees is somewhat less than the width of a typical binocular's field of view. Can you see a little patch of gray haze there? That's the open star cluster M41, about 2,200 light-years away. Sirius, by comparison, is only 8.6 light-years away.

• Have you ever seen Canopus, the second-brightest star after Sirius? In one of the many interesting coincidences that devoted skywatchers know about, Canopus lies almost due south of Sirius: by 36°. That's far enough south that it never appears above your horizon unless you're below latitude 37° N (southern Virginia, southern Missouri, central California). And there you'll need a flat south horizon. Canopus crosses the south point on the horizon just 21 minutes before Sirius does.

When to look? Canopus is due south when Beta Canis Majoris — Mirzim the Announcer, the star a few finger-widths to the right of Sirius — is at its highest point due south (roughly 8:00 p.m. now, depending on how far east or west you are in your time zone). Look straight down from Mirzim then.

• After dinnertime at this time of year, four carnivore constellations stand upright in a row from the northeast to south. They're all seen in profile with their noses pointed up and their feet (if any) to the right. These are Ursa Major in the northeast (with the Big Dipper as its brightest part), Leo in the east, Hydra the Sea Serpent in the southeast, and bright Canis Major in the south.

• It's a busy night at Jupiter. First, Europa disappears into eclipse by Jupiter's shadow at 9:03 p.m. EST, just barely off Jupiter's celestial western limb. Five minutes later, Ganymede emerges from behind the opposite limb! If Jupiter is up in view yet where you are, watch at just the right time to catch this seeming switcheroo.

Later, the tiny black shadow of Jupiter's moon Io crosses Jupiter's face from 11:06 p.m. to 1:21 a.m. EST, with Io itself following along just 13 minutes behind. In the midst of that, Europa reappears from behind Jupiter's eastern limb at 1:14 a.m. EST. (Subtract 3 hours to get Pacific Standard Time.)

Want to become a better astronomer? Learn your way around the sky tonight. The constellations are the key to locating everything fainter and deeper to hunt with binoculars or a telescope.

Mercury (magnitude –0.2) is getting lower and lower in the southeast during dawn. Use binoculars to look for it 5° to 7° lower left of brighter Venus, as shown here.

Venus (magnitude –3.9) appear ever lower in the southeast as dawn brightens this week.

Mars (magnitude +0.4, in Libra), rises around midnight and glows yellow-orange in the south by the time dawn begins. In a telescope it's 8 arcseconds in diameter. Mars will appear more than twice as large, 18.6 arcseconds wide, when it's closest to Earth in late May and early June.

Jupiter (magnitude –2.4, between Leo and Virgo) rises in the east around the end of twilight now. It shines highest in the south around 1 a.m., and by dawn it's low in the west. Jupiter is nearing its March 8th opposition.

Saturn (magnitude +0.5, in the feet of Ophiuchus) rises around 2 a.m. and glows well up in the south-southeast by the beginning of dawn. It's roughly 20° east of Mars. Spot Antares 8° to Saturn's lower right.

Uranus (magnitude +5.9, in Pisces) is getting low in the west right after dark.

Neptune (magnitude +8.0, in Aquarius) is lost in the glare of the Sun. 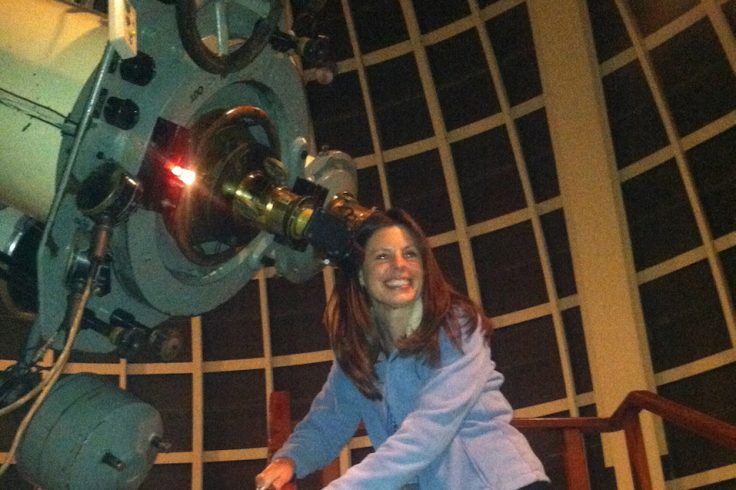