• After dinnertime in January, the Great Square of Pegasus balances on one corner high in the west. Tonight the Moon (nearly first-quarter) marks the way by shining to the left of it, as shown here.

The whole Pegasus-Andromeda constellation complex runs all the way from near the zenith (Andromeda's foot) down through the Great Square (Pegasus's body) to somewhat low in the west (Pegasus's nose).

• First-quarter Moon (exact at 6:26 p.m. EST). The Moon shines in dim Pisces upper left of the Great Square of Pegasus, as shown above. Does the half-lit Moon look just a trace bigger than usual? It's about at perigee.

• If you don't know Kemble's Cascade, it's a lovely binocular asterism in Camelopardalis north of Perseus now high overhead. It's a straight stream of mostly faint stars 2° long, running northwest to southeast. You can use the finder chart in Gary Seronik's Binocular Highlight on page 43 of the January Sky & Telescope. Most of its stars are too faint (7th or 8th magnitude) to show on that chart, but the black circle there is centered on its 5th-magnitude middle star.

• Bright Capella high overhead, and equally bright Rigel in Orion's foot, are at almost the same right ascension. This means they cross your sky’s north-south meridian at almost the same time (around 9 or 10 p.m. now, depending on how far east or west you live in your time zone). So whenever Capella passes its very highest, Rigel marks true south over your landscape.

• The dark limb of the waxing gibbous Moon occults Aldebaran this evening for most of North America. See the time-prediction maps in the January Sky & Telescope, page 49. You can also get local timetables for the star's disappearance and reappearance. The Moon will be 82% sunlit.

• Sirius twinkles brightly after dinnertime below Orion in the southeast, far below the Moon. Sometime around 8 or 9 p.m., depending on your location, Sirius shines precisely below fiery Betelgeuse in Orion's shoulder. How accurately can you time this event for your location, perhaps using a plumb bob or the vertical edge of a building? Sirius leads early in the evening, Betelgeuse leads later.

• Tonight the 9.9-magnitude asteroid 115 Thyra will briefly occult a 9.0-magnitude star near the Beehive cluster in Cancer for telescope users along a narrow track from southern New Jersey through the San Diego area. Watch them merge before their combined light suddenly drops by 1.3 magnitudes for up to 7 seconds. Track map, finder charts, time predictions.

• The nearly-full Moon shines in Gemini this evening, with Castor and Pollux to its upper left and brighter Procyon to its lower right, as shown here.

• On the other side of the sky, the big Northern Cross of Cygnus plants itself upright on the northwest horizon soon after the end of twilight.

• Full Moon (exact at 8:46 p.m. EST). As the Moon climbs the eastern sky this evening, look for Pollux and Castor above it and Procyon to its right. It's currently 4° south of the ecliptic; in a telescope, look for features on its northern limb casting extremely thin shadows even at the time of full Moon.

Mercury is buried in the glow of sunrise.

Saturn (magnitude +0.5) and brilliant Venus (–3.9) are low in the southeast in early dawn. Venus is getting lower, while Saturn is moving higher to Venus's upper right. They're 8° apart on January 16th and 16° apart by the 23rd. Throughout the week, Antares (magnitude +1.1) shines 7° lower right of Saturn.

Mars (magnitude +1.1, in eastern Virgo), glows high in the south in early dawn. This week it moves from 13° to 17° left of Spica, its twin for brightness but not for color!

Jupiter (magnitude –2.3, between Leo and Virgo) rises in the east around 9 or 10 p.m., shines highest in the south around 3 or 4 a.m., and moves over to dominate the southwestern sky by early dawn. It's on its way to opposition March 8th.

Uranus (magnitude +5.8, in Pisces) is still well up in the southwest just after dark. Finder chart.

Neptune (magnitude +7.9, in Aquarius) is getting very low in the west-southwest after dark. 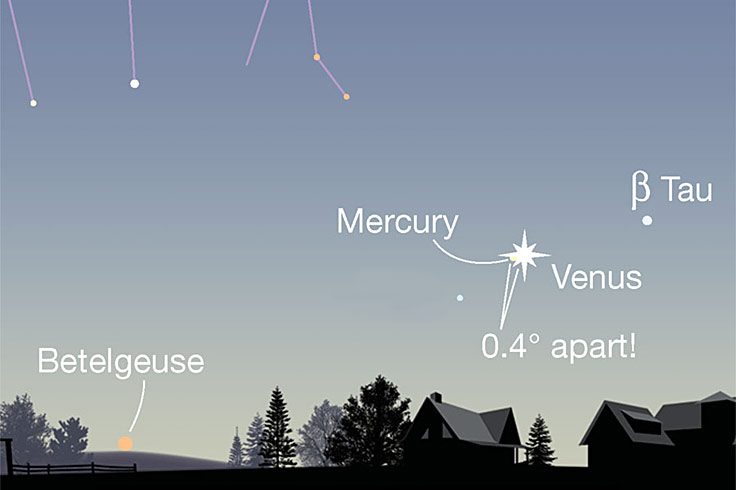 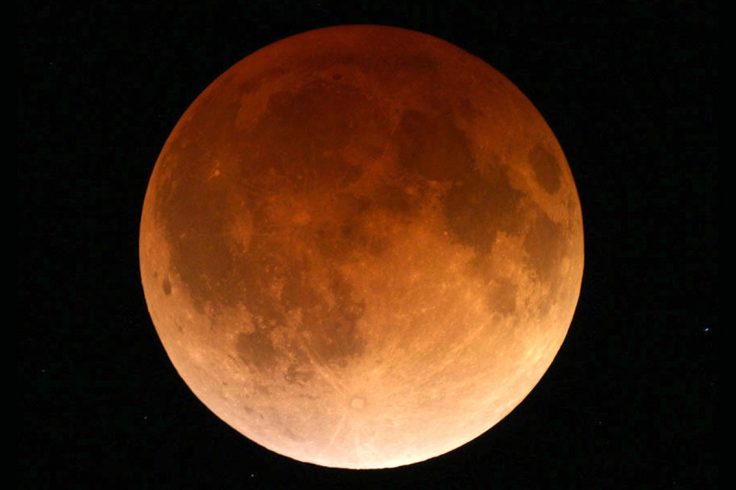