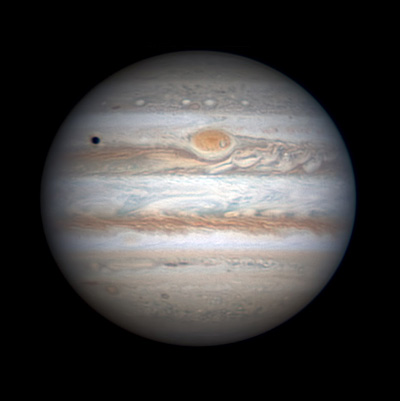 Jupiter on December 11th, imaged almost as well as it ever can be from Earth. Christopher Go used a Celestron-14 scope from his apartment balcony in Cebu City, Philippines. South here is up. Just visible on the right end of the Great Red Spot is Europa, nearly white. More obvious is Europa's black shadow. It's being cast toward celestial west ("preceding") because Jupiter has not yet reached opposition.

The System II longitude at the time of this image was 199°. Through the eyepiece of a medium-aperture scope when Jupiter is again turned this way, in moments of good seeing you should be able to see the Red Spot's unusually strong orange color, the turbulence on its following (celestial east) side, perhaps the white ovals south of it, the differing widths and darknesses of the big South and North Equatorial Belts, and perhaps the blue festoons in the Equatorial Zone.

Mercury is lost in the glare of the rising Sun.

Venus (magnitude –4.9) is the brilliant "Evening Star" in the southwest during and after dusk. It's moving lower now day by day as it wanes to a thinner crescent: from 21% sunlit on December 13th to 14% lit on the 20th. During this time, the crescent enlarges from 41 to 51 arcseconds from horn to horn.

Mars (magnitude 1.1, in the head of Virgo) rises around midnight or 1 a.m. By dawn it's very high in the south, but in a telescope Mars is still very small and gibbous: only 6 arcseconds in diameter. Mars passes 3/4° north of the 3.5-magnitude star Eta Virginis on the 17th and 18th.

Jupiter (magnitude –2.7, in Gemini) rises in the east-northeast around the end of twilight, with Pollux and Castor to its left. It blazes highest around 1 or 2 a.m. In a telescope Jupiter has grown to a big 46 arcseconds wide as it nears its January 5th opposition. See lots about observing Jupiter in the January 2014 Sky & Telescope.

Saturn (magnitude +0.6, in Libra) is in the southeast as dawn begins to brighten. Look for it far to the lower left of Mars and Spica, and far lower right of brighter Arcturus.

Uranus (magnitude 5.8, in Pisces) and Neptune (magnitude 7.9, in Aquarius) are still well placed right after dark in the south and southwest, respectively. Finder charts for Uranus and Neptune.

A Star Count for Everyone 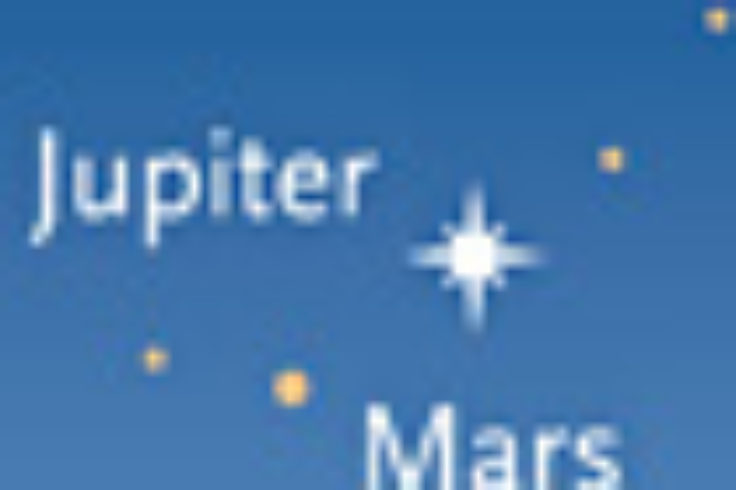 Mars at Its All-Time Finest