Comet Lovejoy is still 5th magnitude, high in the evening sky for binoculars and telescopes. See Comet Lovejoy Shines On.

After dusk at this time of year, four carnivore constellations climb upward low in a row across the northeast to southeast. They're all seen in profile, with their noses pointed to the upper right and their feet (if any) to the right: Ursa Major in the northeast with the Big Dipper as its brightest part, Leo in the east, Hydra the Sea Serpent in the southeast (Jupiter shines midway between the heads of Leo and Hydra), and Canis Major in the south.

Zenith star. If you're in the world's mid-northern latitudes, bright Capella passes straight overhead, or nearly so, around 7 or 8 p.m. (depending on how far west or east you are in your time zone). It goes exactly through your zenith if you're at latitude 46° north: for example Portland, Oregon; Montreal; central France.

And whenever Capella passes highest, Rigel in Orion's foot is always due south.

Mid-February is when Orion stands highest in the south after dinnertime. His eastern shoulder, orange-red Betelgeuse, forms the Winter Triangle with brilliant Sirius far below and Procyon to their left.

The Winter Triangle, or rather one side of it, is also part of a much bigger asterism: the Winter Hexagon. This fills the sky toward the southeast and south these nights. Start with brilliant Sirius at its bottom. Going clockwise from there, march through Procyon, Pollux and Castor, Capella very high, Aldebaran over to Capella's lower right, down to Rigel in Orion's foot, and back to Sirius.

The eclipsing variable star Algol will be at its minimum light, magnitude 3.4 instead of its usual 2.1 (in other words a third of its normal brightness) for a couple hours centered on 12:19 a.m. Tuesday morning EST (9:19 p.m. Monday evening PST). Algol takes several additional hours to fade and to rebrighten.

Mars is now just 2° above Venus in the west-southwest at dusk. They'll remain at least this close for the next nine days.

And, Jupiter's Great Red Spot comes into view around the planet's celestial eastern edge by midnight EST, to reach the planet's central meridian around 1:47 a.m. EST.

Juno, the 3rd-discovered asteroid, was at opposition three weeks ago but is now better placed for evening viewing. It's a little west of the head of Hydra (which is west of Jupiter) and magnitude 8.5. With your telescope, work your way to its exact position using the chart in the February Sky & Telescope, page 50.

Algol is at its minimum light for a couple hours centered on 9:17 p.m. EST.

Mutual eclipse among Jupiter's moons. Io casts its shadow onto Ganymede from 7:35 to 7:43 p.m. EST this evening, dimming it by 0.8 magnitude — that is, reducing its brightness by half — at the middle of that time.

Venus, the thin crescent Moon, and little Mars form a tight bunch in the west-southwest during and after dusk, as shown above. They fit in a circle just 2° across at the times of dusk for most of North America.

Venus and Mars are in conjunction 0.4° apart at dusk, with the Moon now looking on from on high, as shown above.

Mercury (about magnitude +0.2) is becoming visible before sunrise. Look for it just above the east-southeast horizon in early dawn. As the sky brightens, you'll need binoculars.

Venus (magnitude –3.9) and Mars (less than 1% as bright, at magnitude +1.2) are drawing close together in the west-southwest during evening twilight. The gap between them diminishes this week from 4° on the 13th (when Mars is on top) to 0.4° at their conjunction on the evening of Saturday the 21st (with Mars just to Venus's upper right). On Friday the 20th, the crescent Moon joins them to make a beautiful bunch.

Jupiter (magnitude –2.6, at the Leo-Cancer border) was at opposition last week. Watch for it coming into view in the east as twilight fades. As night falls, look to its left and lower left for the Sickle of Leo. By 7 or 8 p.m. Jupiter is high enough in the east for good telescopic viewing. By 10 p.m. it's essentially as high as it will get. In a telescope, Jupiter is a big 45 arcseconds across at its equator.

Saturn (magnitude +0.5, at the head of Scorpius) rises around 1 or 2 a.m. It's best placed fairly high in the south as dawn begins. A little more than 1° to Saturn's lower right in early dawn is Beta Scorpii, magnitude 2.5, a showpiece double star for telescopes. Below Saturn by 9° is orange Antares.

Uranus (magnitude 5.8, in Pisces) is getting low in the west right after dusk.

Neptune is hidden in the glare of the Sun. 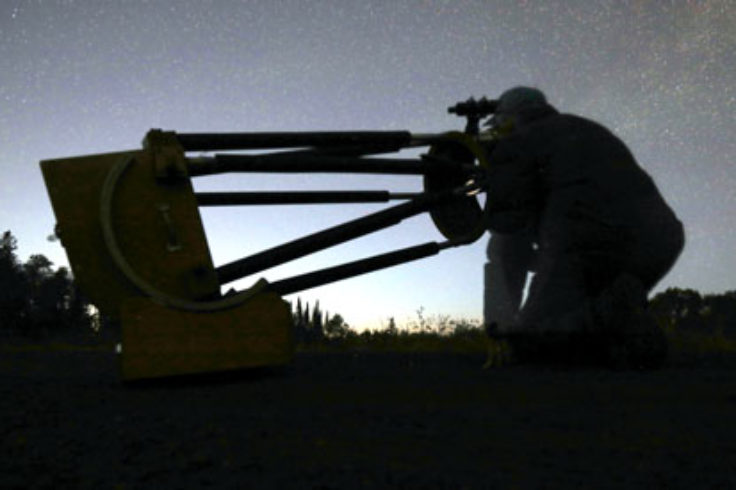 How Low Can You Go? Journey to the Bottom of the Sky 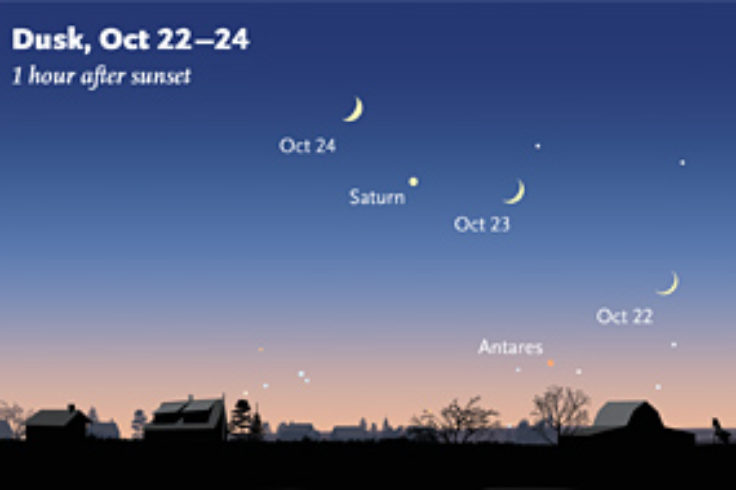