Comet Lovejoy is back in moonless evening view for binoculars and telescopes, high in the northern sky. See Comet Lovejoy Shines On.

Jupiter is at opposition tonight: opposite the Sun as seen from Earth. So it rises around sunset, shines highest in the south around midnight, and sets at sunrise. Jupiter now appears 45 arcseconds wide, its biggest for this year. It remains essentially this large in your telescope all February. See our article The King Holds Court — Jupiter at Opposition.

Have you been keeping an eye on bright Venus and faint little Mars at dusk? Watch as they move nearer each other every day. They'll reach conjunction, just 0.4° apart, on the 21st.

Orion stands high in the southeast after dusk, with his three-star belt pointing down toward brilliant Sirius, the Dog Star. The bright trio of Sirius, Betelgeuse (high above, in Orion's shoulder), and Procyon (to their left) form the big, equilateral Winter Triangle. Compared to the Summer Triangle, it's brighter, more nicely shaped, and more colorful.

The Winter Triangle, or rather one side of it, is also part of a much bigger asterism: the Winter Hexagon. This fills the sky toward the east and south these evenings. Start with brilliant Sirius at its bottom. Going clockwise from there, march through Procyon, Pollux and Castor, Capella very high, Aldebaran over to Capella's right, down to Rigel in Orion's foot, and back to Sirius.

On one of these dark, moonless evenings, take Steve Gottlieb's "Best in Show" tour of four fine planetary nebulae in the February sky — using the article, charts, and pictures in the February Sky & Telescope, page 59. Bundle up for a deep-sky adventure!

In early dawn on Thursday morning the 12th, the last-quarter Moon guides the way to Saturn and Antares to the Moon's lower left, as shown below:

This is a fine time of year to look for the zodiacal light at nightfall, if you live in the mid-northern latitudes. From a clear, clean, dark site, look west at the end of twilight for a vague but huge, tall pyramid of pearly light. It's tilted left to align along the constellations of the zodiac. What you're seeing is sunlit interplanetary dust orbiting the Sun near the ecliptic plane. Article: How to See and Shoot the Zodiacal Light.

Believe it or not, seen from interstellar distances this would be the solar system's brightest feature in total after the Sun itself. The "zodiacal lights" of dust around other stars may be a serious obstacle to someday seeing their small, terrestrial planets.

In early dawn on Friday morning the 13th, the waning Moon forms a nice triangle with Saturn to its right and Antares below them, as shown above.

After dusk at this time of year, four carnivore constellations climb low in a row across the northeast to southeast. They're all seen in profile, with their noses pointed to the upper right and their feet (if any) to the right: Ursa Major in the northeast (with the Big Dipper as its brightest part), Leo in the east, Hydra the Sea Serpent in the southeast (Jupiter shines midway between the heads of Leo and Hydra), and Canis Major in the south.

Zenith star. If you're in the world's mid-northern latitudes, bright Capella passes straight overhead, or nearly so, around 7 or 8 p.m. (depending on how far west or east you are in your time zone). It goes exactly through your zenith if you're at latitude 46° north: for example Portland, Oregon; Montreal; central France.

And whenever Capella passes highest, Rigel in Orion's foot is always due south.

Venus (magnitude –3.9) and Mars (less than 1% as bright at magnitude +1.2) pose in the west-southwest during evening twilight. They're near the border of Pisces and Aquarius. The gap between them diminishes this week from 7° to 4°. They're heading for a close conjunction, 0.4° apart, on February 21st.

Jupiter (magnitude –2.6, at the Leo-Cancer border) is at opposition on February 6th. It comes into view low in the east-northeast as twilight fades, and by 8 p.m. it's high enough in the east for good telescopic viewing. Look to its left and lower left for the Sickle of Leo. Jupiter shines highest in the south in the middle of the night. Bundle up!

Saturn (magnitude +0.5, at the head of Scorpius) rises around 2 a.m. and is well placed in the south as dawn begins. Look 1° lower right of it for Beta Scorpii, magnitude 2.5, a showpiece double star for telescopes. Below them by 9° is orange Antares.

Uranus (magnitude 5.8, in Pisces) is still in the west-southwest right after dusk.

How do I put in my local co-ordinates?

If you are referring to the interactive sky chart, make sure pop ups are enabled. You'll need to go into your web browser's options to do this. Once pop ups are enabled, click the change button to the right of the location tab. You should then get a box asking to enter your location data. 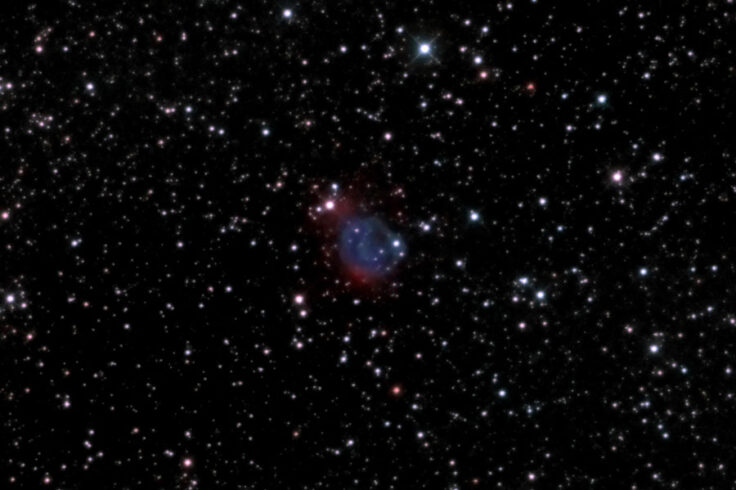