How soon after sunset can you see the first stars and planets coming out? The brightest this spring is Jupiter. Look for it high in the west, almost two fist-widths at arm's length above or upper left of the Moon this evening. Next brightest is Sirius, sinking in the southwest.

The waxing crescent Moon shines below Jupiter in the west at dusk. Above Jupiter are Pollux and Castor. Left of it is Procyon.

Now the Moon shines to Jupiter's left at nightfall. The Moon moves eastward an average of 13° per day with respect to the background stars, a little more than the width of your fist at arm's length.

The Moon forms a rough rectangle in the evening with Procyon below it, Jupiter to Procyon's right, and Pollux above Jupiter.

Before the Moon waxes further and lights the night sky, check in on the faint "new Comet PanSTARRS," Comet C/2012 K1, under the handle of the Big Dipper. Use the finder chart in the May Sky & Telescope, page 50. It's currently being reported at about magnitude 9.0, a little fainter than originally predicted, with no tail visible in a 6-inch scope at 36×.

The Eta Aquariid meteor shower peaks before dawn's first light Tuesday morning. The shower is often the year's richest for Southern Hemisphere observers. From mid-northern latitudes the shower's radiant point doesn't rise very high before dawn, so fewer are seen, but those that do appear are long "earthgrazers" skimming the upper atmosphere, more dramatic than short meteors coming straighter down.

First-quarter Moon (exactly so at 11:15 p.m. Eastern Daylight Time). The Moon shines in Cancer above the dim head of Hydra. Well to the Moon's upper left is Regulus, forming the bottom of the Sickle of Leo.

Just above the Moon at nightfall are Regulus and the Sickle of Leo.

Sometime late this evening (roughly 10 p.m. depending on where you live), bright Capella declining in the northwest will be exactly as high as bright Vega climbing in the northeast. How accurately can you time their altitude balance? Each day it will come four minutes earlier.

The waxing gibbous Moon forms a curving line tonight with Mars to its left and Spica to Mars's lower left.

Bright Mars shines left of the Moon. Although they look rather close together, Mars is 260 times as far away — and twice as big in diameter.

Mercury (about magnitude –1.2) is emerging into view very low in the sunset. Look for it above the west-northwest horizon about 30 minutes after sundown. Binoculars help. Mercury will become a little higher and easier to spot each day.

Venus (magnitude –4.2) is the bright "Morning Star" low in the east during dawn. How late into the growing daylight can you follow it?

Mars (magnitude –1.0, in Virgo) shines in the southeast to south during evening. Just left of it is 3rd-magnitude Porrima. Far lower left of Mars sparkles Spica.

In a telescope Mars is still 14 arcseconds wide, though it will soon start shrinking faster. See the Mars map and observing guide in the March Sky & Telescope, page 50. Use our Mars Profiler to find which side of the planet will be facing you when you plan to look.

Jupiter (magnitude –2.0, in Gemini) shines high in the southwest in twilight. It sinks westward through the evening and sets around midnight or 1 a.m. In a telescope it has shrunk to 35″ across its equator.

Saturn (magnitude +0.1, in Libra) comes to opposition May 10th. It rises around sunset, shines in the southeast during evening, and stands highest in the south around 1 a.m. By then it's far left of Mars, and half as far to the upper right of Antares.

"We may be little guys, but we don’t think small. It’s the courage of questions, of grasping our true circumstances, and not pretending we are at the center of it all, that is adulthood."
— Ann Druyan, 2014. The remade Cosmos series continues on Sunday nights through June 13th. Episode guide. Watch online anytime. 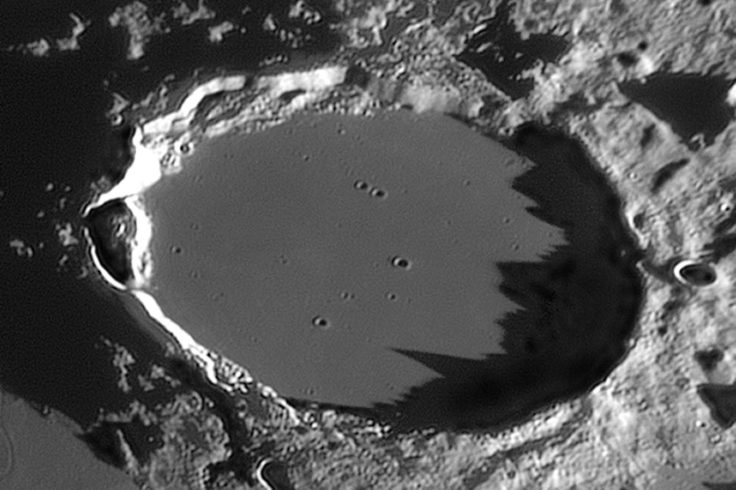