Does night already seem to be falling about as early as it ever will? You're right! We're still a whole month away from the winter solstice — but the Sun sets its earliest around December 7th, and right now it already sets within only about 5 minutes of that time (if you're near latitude 40° north). A surprising result of this: The Sun actually sets a trace earlier on Thanksgiving than on Christmas, even though Christmas is around solstice time.

This offset is made up for by the opposite happening at sunrise: the Sun doesn't come up its latest for the year until January 7th. You can blame the tilt of Earth's axis and the eccentricity of its orbit.

High in the northeast, the W pattern of Cassiopeia stands on end as early as 6 p.m. now. Whenever this happens, the dim handle of the Little Dipper (far lower left of Cassiopeia) extends straight left from Polaris.

Algol in Perseus should be at its minimum brightness, magnitude 3.4 instead of its usual 2.1, for a couple hours centered on 11:50 p.m. EST (8:50 p.m. PST). Algol takes several hours to fade beforehand and to rebrighten after.

We're two thirds of the way through fall, so Capella shines well up in the northeast as soon as the stars come out. As night grows darker, look to its right by about three fists at arm's length for the frosty little Pleiades cluster, the size of your fingertip at arm's length.

With the waxing Moon still thin, plan some deep-sky observing while the evenings are still dark! Around the spilling water bucket of Aquarius are the Helix Nebula, the R Aquarii nebula, a little-known globular cluster, and some galaxies in the 11th- and 12th-magnitude range — as told in depth by Sue French in her Deep-Sky Wonders column in the November Sky & Telescope, page 56, with map and photos.

Look for Mars left of the crescent Moon in twilight, as shown above.

Algol is at minimum light for a couple hours centered on 8:39 p.m. EST.

The Moon now shines near Alpha and Beta Capricorni at nightfall, as shown above (depending on your location). Both Alpha and Beta Cap are wide double stars for binoculars. Alpha is easy to resolve; Beta is somewhat less so with its narrower separation and greater brightness difference.

Whenever Fomalhaut is "southing" (crossing the meridian due south, which it does around 6 or 7 p.m. this week), you know that the first stars of Orion are just about to rise in the east, and the Pointers of the Big Dipper stand directly below Polaris (if you're in the world's mid-northern latitudes).

First-quarter Moon (exactly so at 5:06 a.m. Saturday morning EST). Look for Fomalhaut far to its lower left, and Enif, the nose of Pegasus, almost as far to the Moon's upper right.

The Moon stands high in the south soon after nightfall, with the western side of the Great Square of Pegasus pointing down at it from above.

By 10 or 11 p.m. now (depending in how far east or west you live in your time zone), the dim Little Dipper hangs straight down from Polaris.

Mercury is disappearing deep into the glow of sunrise.

Mars (magnitude 1.0) remains visible in the southwest during and after twilight. It sets around 8 p.m. local time.

Jupiter (magnitude –2.2, in western Leo) rises in the east-northeast around 10 or 11 p.m. About 45 minutes later, fainter Regulus (magnitude +1.4) rises below it. By dawn they shine high in the south, with Regulus now to Jupiter's left.

Uranus (magnitude 5.7, in Pisces) and Neptune (magnitude 7.9, in Aquarius) are high in the southeast and south, respectively, right after dark. They move westward as the evening progresses. You'll need binoculars or a small telescope and our finder charts for Uranus and Neptune. 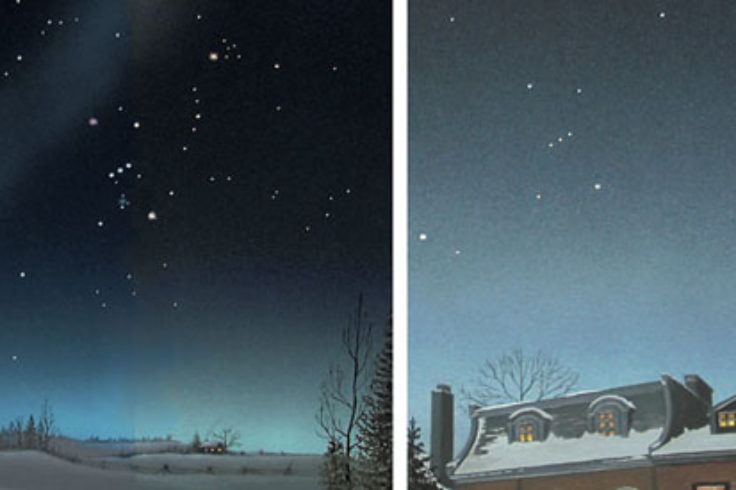 Observer's Guide to the H-alpha Sun