Some daily sky sights among the ever-changing stars and planets.

The Moon, just past full, rises in the east at dusk. Once it climbs high, look for orange Aldebaran to its lower left and the Pleiades to its upper left.

The waning gibbous Moon rises around the end of evening twilight. Look for Aldebaran not very far to its upper left. Higher above Aldebaran are the Pleiades.

By 8 p.m. now, Great Square of Pegasus stands in its level position very high toward the south. Its right side points far down toward Fomalhaut. Its left side points less far down more or less toward Beta Ceti.

If you have an open view to a dark south horizon, and if you're no farther north than roughly New York or Denver, picture an equilateral triangle with Fomalhaut and Beta Ceti forming its top two corners. Near where the third corner would be is Alpha Phoenicis, or Ankaa, in Phoenix. It's magnitude 2.4, not very bright but the brightest thing in the area. Have you ever seen a star of Phoenix before?

Very high now in the north, in the fall Milky Way, is dim Cepheus, husband in myth to brighter Cassiopeia. Its constellation pattern hosts two landmark variable stars, Delta (δ) and Mu (μ) Cephei, for binoculars or even the naked eye. Delta is the prototype Cepheid. Mu is one of the largest stars known. See Gary Seronik's Binocular Highlight column and chart in the November Sky & Telescope, page 45.

Now that the waning Moon doesn't rise until about 10 p.m., evening is for deep-sky observing again. If your scope is big enough and your sky dark enough to show 12th- or 13th-magnitude galaxies (maybe within reach of a 6- or 8-inch scope in the exurbs), see how many galaxies you can log inside the Circlet of Pisces using Ken Hewitt-White's Going Deep column and chart in the November Sky & Telescope, page 60.

Jupiter and the waning Moon shine high in the south in early dawn Friday morning the 14th, with fainter Regulus to their left, as shown here. Although they look close together, Jupiter is 2,600 times farther than the Moon, and Regulus is 950,000 times farther than Jupiter.

Last-quarter Moon (exact at 10:16 a.m. EST). The Moon rises around midnight tonight with Jupiter to its left (for North America.) By dawn Saturday morning the 15th, the Moon is below Regulus with Jupiter now high to their upper right.

Mars is right over the handle of the Sagittarius Teapot as twilight fades and the stars come out, as shown in the last illustration below. Binoculars will help.

Mercury is coming down from its best dawn apparition of 2014 (for mid-northern latitudes), but it remains as bright as ever at magnitude –0.8. Look for it low above the eastern horizon in mid-dawn, as shown at the top of this page. Don't confuse it with fainter Spica to its upper right, or with Arcturus much farther to its upper left.

Venus remains hidden the glare of the Sun.

Mars (magnitude +0.9) remains in the southwest during and after twilight; it sets around 8 p.m. local time. Look for it far below Altair.

Jupiter (magnitude –2.0, in western Leo) rises in the east-northeast around 11 or midnight. About 40 minutes later, Regulus (magnitude +1.4) rises below it. By dawn they shine high in the south, with Regulus now to Jupiter's left.

Uranus (magnitude 5.7, in Pisces) and Neptune (magnitude 7.9, in Aquarius) are high in the southeast and south, respectively, shortly after dark. See our finder charts for Uranus and Neptune online or in the September Sky & Telescope, page 50. 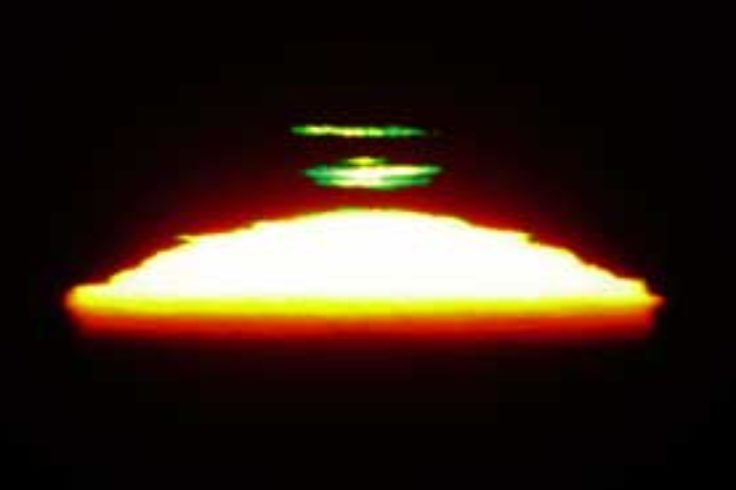