Some daily celestial sights among the ever-changing stars and planets

As evening twilight fades away, look very far to the lower left of the Moon for Fomalhaut, the Autumn Star, already climbing up from the southeast horizon.

The W pattern of Cassiopeia stands vertically (on its dimmer end) high in the northeast around 10 or 11 p.m., depending on your location. By then the Big Dipper is lying level just above the north-northwest horizon — if you live in the mid-northern latitudes. As far south as San Diego and Jacksonville, the Dipper will lie partly below the horizon.

Look above the gibbous Moon this evening for the Water Jar asterism of Aquarius. It's not bright; you may need binoculars.

As twilight fades, look for Arcturus, the Spring Star, twinkling in the west to west-northwest. It's still pretty easy to see. But how much later into the fall, as it sinks away, will you be able to keep it in view?

Total eclipse of the full Moon happens before dawn Wednesday morning for North and Central America; Wednesday evening for Australia and eastern Asia. See our article, Wake Up to a Total Lunar Eclipse on October 8.

Earlier in the evening for North America, look above the bright full Moon for the Great Square of Pegasus tipped onto one corner.

Altair is the brightest star high in the south at nightfall. Very far to its lower left (about six fist-widths) is Fomalhaut, almost as bright.

Mars still shines low in the southwest at nightfall. Look to its left, by about two fist-widths at arm's length, for the fist-sized Teapot of Sagittarius. (You'll need an open view toward the south-southwest.) As the season advances and the Teapot moves lower, it tips ever farther to pour out its last drops.

The waning gibbous Moon is up in the east by 9 or 10 p.m. Look left of it (by about a fist-width at arm's length) for the Pleiades. Much farther left, in the northeast, shines Capella in Auriga.

High above the Moon and Capella, forming a big triangle with them, is the naked-eye eclipsing variable star Algol. It should be at its minimum light, magnitude 3.4 instead of its usual 2.1, for a couple hours centered on 12:36 a.m. tonight EDT; 9:36 p.m. PDT. Algol takes several additional hours to fade and to recover. Info and comparison-star chart.

The Moon late this evening shines near Aldebaran amid the Hyades. Take a look with binoculars. This will be a challenging scene to photograph (use a long lens), what with the Moon's brilliance and the Hyades stars' faintness.

Venus (magnitude –3.9) has sunk away deep into the sunrise.

Mars (magnitude +0.8) is low in the southwest during dusk. Look for twinklier orange Antares (magnitude +1.0) ever farther to Mars's lower right.

Jupiter (magnitude –1.9, at the Cancer-Leo border) rises in the east-northeast around 2 or 3 a.m. It shines brightly high in the east before and during dawn. It forms a big triangle with Pollux above it (by about two fists at arm's length) and Procyon to their right. Look below Jupiter and a bit left for Regulus.

Saturn (magnitude +0.6, in Libra) is sinking away into the afterglow of sunset. Look for it well to the right of Antares, which is lower right of Mars.

Uranus (magnitude 5.7, in Pisces) and Neptune (magnitude 7.8, in Aquarius) are high in the southeast and south, respectively, by 10 p.m. See our Finder charts for Uranus and Neptune online or in the September Sky & Telescope, page 50. 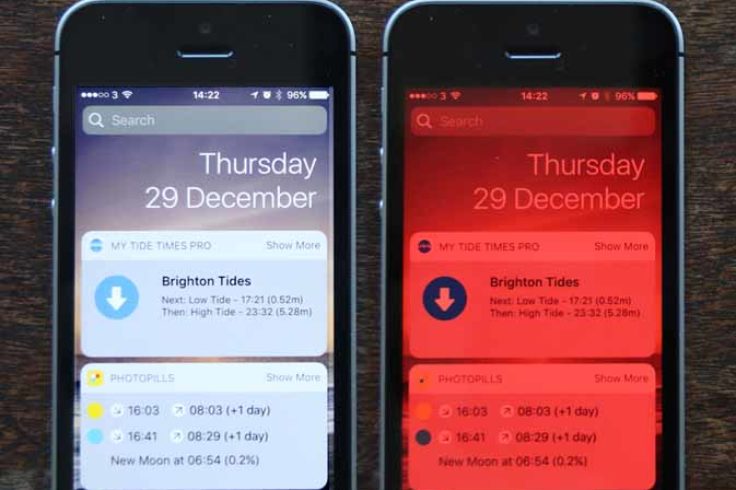 A Better Red-Light Filter for Your iPhone