In early dawn Saturday morning, Jupiter shines upper left of the waning Moon in the east, as shown at right. How long has it been since you turned your scope on either Jupiter or the maria-covered waning crescent?

In bright twilight, Mercury and fainter Spica are in conjunction 0.6° apart just above the west-southwest horizon. Use binoculars to scan for them about 20 minutes after sunset.

The eclipsing variable star Algol (Beta Persei) should be at its minimum light, magnitude 3.4 instead of its usual 2.1, for a couple of hours centered on 10:55 p.m. EDT.

In early dawn on Sunday the 21st, the waning crescent Moon shines far below Jupiter and closer to the right of Regulus, as shown above.

And if you have a sky that dark, also use binoculars to investigate the big, dim North America Nebula and its surroundings near Deneb in Cygnus using the September issue's Deep-Sky Wonders article, page 56.

The September equinox comes at 10:29 p.m. on this date EDT (2:29 September 23rd UT). This is when the Sun crosses the equator heading south for the year. Fall begins in the Northern Hemisphere, spring in the Southern Hemisphere. Day and twilight-plus-night are nearly equal in length. The Sun rises and sets almost exactly east and west.

As summer ends, the Sagittarius Teapot is moves west of due south during evening and tips increasingly far over, as if pouring out the last of summer.

Algol is at minimum light again for a couple hours centered on 7:44 p.m. EDT.

Mars is within 4° of Antares (passing north of it) from this evening through the 30th. Mars is just a little brighter and almost the same color as its namesake star; "Antares" is Greek for "anti-Mars."

With the coming of fall, Deneb slowly replaces Vega as the bright star nearest to the zenith just after nightfall (for mid-northern latitudes).

As early as 8 or 9 p.m. now look for Fomalhaut, the lonely 1st-magnitude Autumn Star, twinkling on its way up from the southeast horizon. It will be highest due south around 11 or midnight (depending on your location).

Low in the southwest in twilight, Mars and Antares are passing 3° apart this evening and Sunday evening, as shown below. Meanwhile, off to their right, the waxing crescent Moon floats a couple degrees to the lower right of Saturn (for North America).

Mercury (magnitude 0.0) remains very deep in the sunset. Scan for it with binoculars just above the west-southwest horizon about 20 minutes after sundown. Fainter, twinklier Spica is right nearby. Mercury and Spica appear closest together, 0.6° apart, on Saturday evening the 20th.

Venus (magnitude –3.9) is barely above the horizon due east shortly before sunrise. Bring binoculars.

Jupiter (magnitude –1.9, in Cancer) rises around 3 a.m. and shines brightly in the east before and during dawn. It forms a roughly equilateral triangle with Pollux above it (by about two fists at arm's length) and Procyon to their right. Farther to the right or lower right of Procyon sparkles brighter Sirius.

Saturn (magnitude +0.6, in Libra) is sinking low into the afterglow of sunset. Look for it well to the right of the Mars-Antares pair, and perhaps a little lower depending on your latitude.

Uranus (magnitude 5.7, in Pisces) and Neptune (magnitude 7.8, in Aquarius) are high in the southeast and south, respectively, by 11 p.m. See our Finder charts for Uranus and Neptune online or in the September Sky & Telescope, page 50.

Finally a clear night in Houston! If Antares didn't twinkle, it would be difficult to tell it apart from Mars! Enjoying their close proximity! 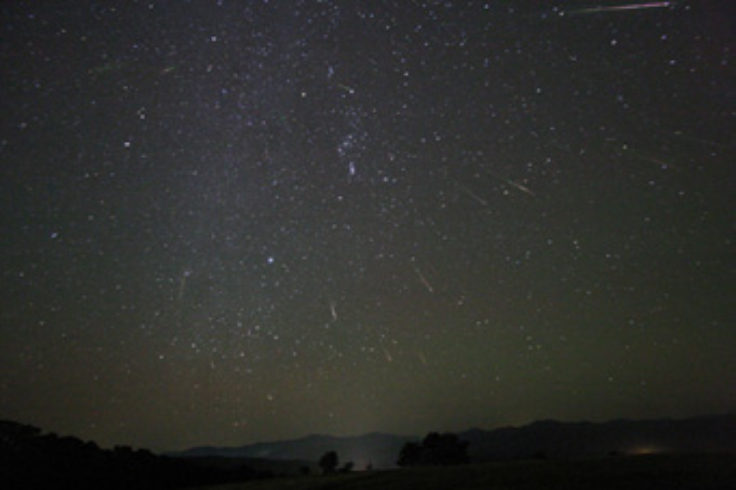