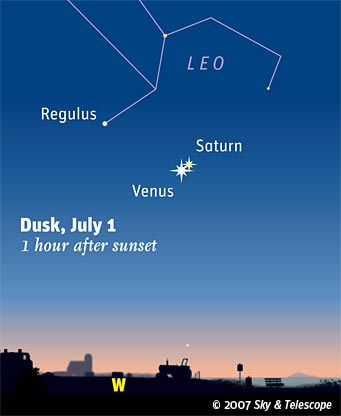 On the evenings of June 30th and July 1st, Venus and Saturn will be a striking pair in the western sky.

The starry heavens unroll with the seasons, as they do every year, while our solar system provides ever-changing sights closer to home. Here's a taste of special events to watch for in 2007. Keep your browser pointed our way, and watch Sky & Telescope magazine for further details.

The year opens with a question mark about a comet. Discovered early last August on an in-bound trajectory, Comet McNaught (C/2006 P1) has been lost in the solar glare since early December, so no one really knows how it's been brightening. It reaches perihelion on January 12th, well inside Mercury's orbit, but then what? It could become as bright as magnitude 0 around mid-January, when it might be visible as a speck of light shortly after sunset, very low the twilight glow. Toward month's end this comet will draw away from the Sun and into view for Southern Hemisphere observers, but by then it will have lost its luster.

Four eclipses take place this year, but not all are visible from any one place. First comes a total eclipse of the Moon on the night of March 3-4, best seen from Europe or Africa; eastern North America can see some of this spectacle. On August 28th, another total lunar eclipse is visible from all Pacific Rim countries, including most of the US and Canada. Both of these lunar eclipses are followed, two weeks later, by partial solar eclipses. That of March 19th can be seen from China, and that of September 11th from southern South America.

Skywatchers along the North American West Coast have a chance to spot an extremely young crescent Moon on April 17th (see February's Sky & Telescope, page 65). The following month there will be new debates about what constitutes a Blue Moon. For Americans, the Moon becomes full twice in May (on the 2nd and 31st). For Europeans, it does so twice in June (on the 1st and 30th).

Of the major planets in 2007, Saturn leads the parade. During January this ringed planet is a splendid sight in telescopes, visible all night every night, and it stays high in the evening sky for another four months. Venus is the brilliant Evening Star through July, passing through its stunning crescent phase, and in late August it enters the morning sky. Mercury makes its best evening appearance at the end of May for Northern Hemisphere observers, and again in the morning sky during the first half of November. Mars grows in size to become a fine telescopic sight in December, its disk hovering between 15 and 16 arcseconds across all month.

In the 200th year since its discovery, Vesta, the brightest of all asteroids, makes one of its best showings ever. By the end of May Vesta should be an easy naked-eye target, shining at magnitude 5.4 as it slips past the globular cluster M107 in Ophiuchus.

As luck would have it, all the major meteor showers reach their peaks in 2007 with the Moon out of the sky. Any of these showers can produce dozens of shooting stars each dark hour leading up to dawn. Mark your calendar to look for the Lyrids on April 23rd, Perseids on August 13th, Orionids on October 21st, Leonids on November 18th, and Geminids on the night of December 13-14. Meteor enthusiasts are keenly awaiting the Geminids in 2007 because their progenitor, the defunct comet Phaethon, precedes them in a flyby of Earth on December 10th.

Pluto will make big news again in 2007, and not because it is or isn't a planet. Pluto is involved in one of the year's most anticipated occultations on March 18th, when it passes directly in front of a 14.9-magnitude star for all the major observatories of the American Southwest. They'll train their "big guns" on Pluto, hoping to learn more about its shrinking atmosphere as the star's light fades and then returns into view. Amateurs with telescopes as small as 10 inches can share in this effort.

Also in 2007, asteroid 372 Palma passes in front of the borderline naked-eye star 32 Lyncis on January 26th; see the February Sky & Telescope, page 64, for this event's visibility path, which extends clear across the US from coast to coast.

And don't miss some spectacular lunar occultations this year. The crescent Moon occults the Pleiades for northwestern North America on March 22nd. Then on June 18th, a thin sliver of a Moon sneaks up on brilliant Venus for countries of the Middle East. On the next night, June 19th, skywatchers in the southeastern US can see the crescent Moon snuff out the bright star Regulus.