I don't know if I'm the first to say it, but finding Comet Holmes last night was elementary! (Everyone groan together....) 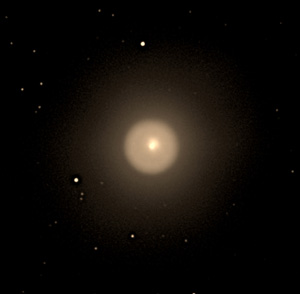 This is pretty much what I saw: Comet Holmes on the night of October 25th as captured by Gil Esquerdo using the Smithsonian Astrophysical Observatory's 48-inch reflector at Whipple Observatory in Arizona.

I ducked out during the World Series at about 10 p.m. to try for the comet with binoculars and it was very easy to spot, having just cleared the house next to mine. Even with a full Moon! As soon as the Red Sox won Game 2, I set up my LX-90 in my driveway and viewed it with various eyepieces. The comet certainly is a weird one. Looks like a big planetary nebula. At one point I was able to see the pinpoint pseudo-nucleus. It was interesting to consider that a week ago, the comet was so faint, I wouldn't have been able to see it with my telescope even in the darkest rural skies.

This morning, I finally checked the orbit for Comet Holmes and was intrigued that all of the terrestrial planets are all gathered between the comet and the Sun. I thought, "Why, it's like the Jupiter Effect!" Either that, or perhaps it an alien spacecraft that's been in orbit around the Sun observing us for the past 115 years and it's finally leaving — we're just seeing the rocket exhaust.

I guess I'm just tired from being up late.

Indeed, your average Sox fan can wander out during the seventh inning to relieve himself, look up at the sky, and bingo! There it is. A blurry object among blurry objects. So cast aside those Kohoutek blues and go outside and see a real comet!

Even here in the murky fire-smoke-laced marine layer of Silicon Valley, I spotted it without too much difficulty in the early-morning sky today. Alpha Persei was just visible to the naked eye over the moon- and city-glare, and the comet was of comparable brightness. It jumps out quite satisfyingly in binoculars. I was even able to capture its essential cometness on my decidedly non-astro-quality Casio EX-Z750 with tripod and 20-second exposure.

I'm so glad something like this comes along every once in a while to remind me, and all the other Pratchetteers, that It Moves. The Turtle Moves.

Indeed, Comet Holmes is a great surprise. It was great to finally see it on Saturday night after four straight nights of clouds and rain.

Got an excellent view of Comet Holmes here in San Antonio on Saturday night. Although I could see it with my binoculars, it is a beautiful telescope sight at lower power (48X and 30X).

For the second night I observed Holmes with a 10" Dob from my backyaer. But on Sunday night I saw two nuclei where on Saturday night there was one.

Did anyone else notice?

On Sturday night when I observed Comet Holmes from my backyard with a 10" dob I saw one bright nuclei. On Sunday night I saw two. Did anyone else notice this?

I finally had a chance to go out and take a look at Comet Holmes on 10/29 and 7:00 PM EST. It was easily seen with the naked eye. When I looked through the 32mm eye piece on my Celestron 8" SCT, I was stunned at the view. It was big, bright and glowing with the nuclei dead center and bright. I ran in the house and dragged my wife Lisa and daughter Jess out for a look. My daughter discribed it as looking like a dandilion that was ready to release it seed to the wind, prefect discription. You could make out the brighter flair of gases off to one side and a single star shining through the gas halo at the very edge of the gaseous orb. When I put on a 8mm wide feild lense Comet Holmes occupied 80% of the field of view, an absolutely fantastic view. I'll be out there in my backyard in Massachusetts again to take in this unbelievable site.

Just outstanding I was flabergasted in seeing this beautifull comet even thou that you don´t see it moving, but is easy without anybinoculars , since probably 8,9 or 10 pm in Baja California South Mexico exactly San Jose del Cabo THANKS FOR LETTING ME KNOW , I HOPE YOU COULD TELL ME IF IT WILL DEVELOP A TAIL IN A FEW DAYS AND HOW LONG IS GOING TO LAST THANKS AGAIN