While not especially bright, Comet Lovejoy passes some familiar telescopic sights in the next few weeks. It should appear as a fuzzy glow, about as easy to spot as M57, the famous Ring Nebula in Lyra, but a bit larger. Click on this chart for a wider view of its path. The tick marks give the comet's location at 0 hours Universal Time on each date.

The comet discovered last month by Terry Lovejoy in Queensland, Australia, is now quite accessible before dawn to observers with small telescopes in the Northern Hemisphere. While it doesn't sport much of a tail, Comet Lovejoy (C/2007 E2) makes a fine deep-sky target as it moves from Aquila northward between the stars of Lyra and Hercules toward the head of Draco during the next few weeks, gradually fading from 8th to 10th magnitude.

Bright moonlight can't be avoided during the period April 28th through May 3rd, so catch this fleet visitor when you can!

Our finder chart includes stars as faint as 7th magnitude, which will help skywatchers star-hop to the comet. Tick marks show its location night by night at 0 hours Universal Time (midnight at Greenwich). For example, just before dawn on Saturday, April 28th, North American observers will find it roughly midway between the ticks for the 28th and 29th, about 7° southwest of Messier 57, the Ring Nebula in Lyra. Click on the chart for a wider view.

Lovejoy first detected this comet as a 9th-magnitude fuzzball on images taken with his Canon 350D. It's the first comet ever discovered with an off-the-shelf digital camera. The comet's future path was not known when we issued our AstroAlert last month, but Brian G. Marsden of the Minor Planet Center soon had enough observations to calculate that the comet would pass through perihelion (its closest point to the Sun) on March 27th, just outside Earth's orbit. It is moving along a parabolic trajectory whose plane is almost perpendicular to that of the solar system.

Comet Lovejoy is now receding from both the Sun and Earth, and it'll be outside the orbit of Mars by late May. 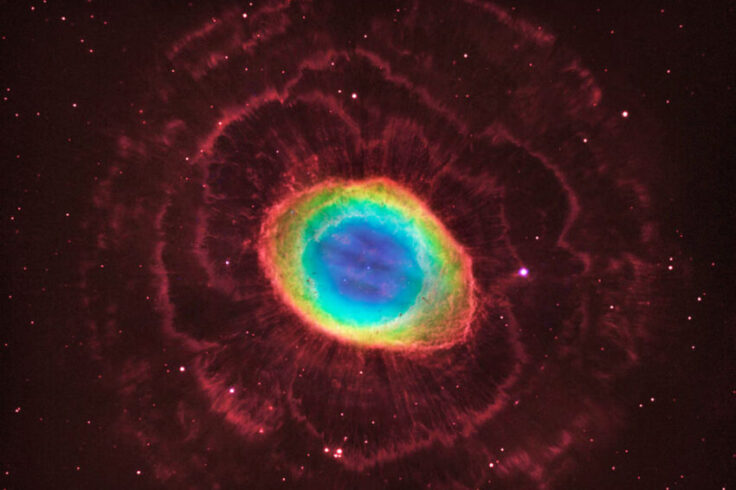 Evenings with the Ring Nebula