The Lyrid meteor shower has been observed for more than 2,000 years; Chinese records say "stars fell like rain" during the shower of 687 BC. But in recent times the Lyrids have generally been weak. Typically more meteors than usual are seen for a few days on either side of a meteor shower's peak. The Lyrids, by contrast, have a brief maximum that lasts for less than a day, and even then only 10 to 20 of the shower's meteors may appear per hour.

However, there have been some remarkable exceptions. In 1982 the rate unexpectedly reached 90 for a single hour — and 180 to 300 per hour for a few minutes. A brief outburst of 100 per hour was also seen in 1922. And on April 20, 1803, residents of Richmond, Virginia, upon being rousted out of bed by a fire bell, were startled to see great numbers of meteors in all parts of the sky. "This unpredictability always makes the Lyrids a shower to watch, since we cannot say when the next unusual return may occur," note Alistair McBeath and Rainer Arlt of the International Meteor Organization. 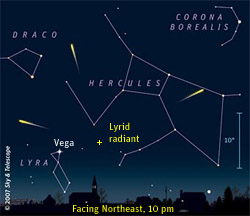 Lyrid meteors all appear to originate from a point in the sky near the bright star Vega. As this radiant rises higher, the rate of meteors increases.

This year the Lyrid meteor shower is predicted to peak around 22h Universal Time (6 p.m. EDT) on April 22nd — good timing for Asia but in daylight for North America. The shower is generally at least half as strong as its maximum for about 30 hours, so North American observers should be able to catch its rising and falling phases in the early-morning hours of April 22nd and 23rd, respectively.

Use our interactive
sky chart
to see the appearance of the heavens when you go out to see the Lyrids. The radiant point of this shower lies between the bright summer star Vega and the keystone pattern of the constellation Hercules. Be sure you've turned off your pop-up blockers and click on the "change" button to alter either the date and time or viewing location displayed by the chart.