It's rare for all five of the classical planets to be above the horizon simultaneously in the evening sky. The good news is that we're starting one such period right now, in mid-August 2008. The bad news is that observers at mid-northern latitudes will need very clear skies, an unobstructed western horizon, and binoculars to see some of the planets. The situation is better in the tropics and the Southern Hemisphere, where the whole show takes place much higher above the horizon.

This is just the beginning of an amazing show that continues well into September. Click here to view a one-megabyte movie of the four-planet dance. After watching the general progression, step forward and back to see the configuration on any particular evening. You may need to install QuickTime to watch the film if you haven't already done so.

Throughout August and September, Jupiter shines bright and steady in the south. On August 13th, the waxing gibbous Moon passes 6° to Jupiter's lower left, making a fine pair in wide-angle, low-power binoculars. 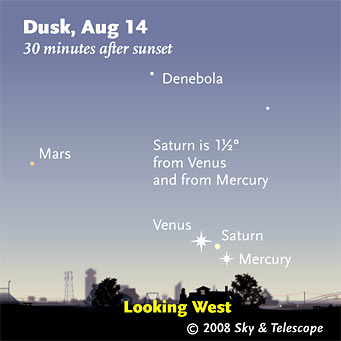 Dazzling as Jupiter is, Venus is brighter by far. But it's also much harder to find, because it's so close the western horizon. In good conditions, this planet is visible to the unaided eye — looking very much like an incoming airplane — as soon as the Sun sinks below the horizon. A half hour after sunset, Venus is quite brilliant, but also extremely low, so start looking for it as early as possible. See Sean Walker's article for more information on observing Venus.

Once you've found Venus, the other planets should be easy to spot with binoculars. Mars shines fairly high but not very bright (just magnitude 1.7) to Venus's left.

Starting August 12th, Saturn and Mercury undergo an amazing series of close encounters with Venus and each other. On the 13th, Saturn is just ½° to Venus's right — an amazing sight through a telescope at 50× to 100×. On the 15th, Mercury and Saturn are very close to each other. A couple of days later, Mercury makes a close encounter with Venus, and the two innermost planets hang together for the rest of the month, joined shortly by ever-sinking Mars.

Exceptionally clear skies in Sydney Aust. Ecliptic is steep so easy to see this dance of the planets at 6pm local time

The moon (just a small slice) had a very bright star at the bottom tip of it on jul 7,2007 was really significant to me (as my only child (son) died that day. I just need to know what that star was. This would mean so much to me since it seemed significant for a spiritual reason. Can some one please identify this star. I have tried to find out by research but don't know how to find this information. This would mean so much to a grieving mother. Thank You any information would be appreciated. shirley