A remarkable series of events takes place low in the west-northwest shortly after sunset from late May to late June. It features the tightest three-planet grouping visible without binoculars until 2026 and an excellent apparition of Mercury. 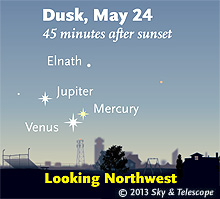 Venus and Jupiter, the two brightest planets, have been approaching each other all month. Mercury, currently the third-brightest planet, becomes visible to Venus's lower right around May 19th. It appears closer to Venus each evening until May 24th, when it's just 1⅓° upper right of Venus.

From May 24th to 29th, Venus, Jupiter, and Mercury all fit within a 5° circle. That means that you can view all three at the same time with most hand-held binoculars. 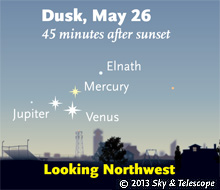 Click above to watch an animation of the planets and stars from May 20th to June 20th.

The grouping is tightest on May 26th, when all three planets fit in a 2½° circle. Jupiter appears right next to Venus on the 27th, and after that it slowly pulls down and right of Venus, disappearing from view in early June.

But Mercury is only now entering the prime evenings of this apparition, soaring ever higher above Venus until June 7th, when it slowly begins to sink back toward Venus. But as always during an evening apparition, Mercury is beginning to fade — slowly at first but increasingly rapidly after mid-June.

Mercury was nearly as bright as Jupiter at the beginning of this apparition, but it has faded tenfold by June 20th, appearing no brighter than the stars Castor and Pollux above it.

Watch an animation of the entire amazing three-planet conjunction: