Some daily events in the changing sky for May 25 – June 2. 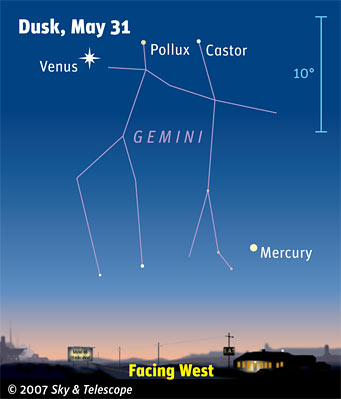 Don't miss the two innermost planets shining after sunset in Gemini — and watch them moving rapidly from day to day. (The blue 10° scale is about the size of your fist held at arm's length.)

Mercury (about magnitude 0) is usually elusive, but right now it's having a fine apparition in evening twilight. Don't miss it! Look for Mercury low in the west-northwest about an hour after sunset, far to the lower right of bright Venus. 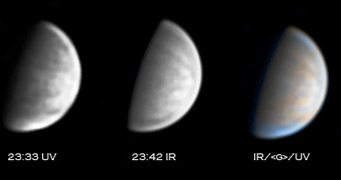 Sky & Telescope's Sean Walker continues to image Venus as the planet slowly wanes and enlarges. On May 20th its clouds were full of detail in both ultraviolet (UV) and near-infrared (IR) light. The Universal Times of the exposures are given. Walker made the color rendition by showing ultraviolet as blue, infrared as red, and adding a green channel created by interpolating between the two.

Venus (magnitude –4.3, in Gemini) is the brilliant "Evening Star" in the west during and after twilight. Pollux and Castor are lined up above it at the beginning of the week, and to its right by June 2nd. In a telescope, Venus appears just about perfectly half-lit.

Mars (magnitude +0.9, in Pisces) is gradually getting higher in the east before and during dawn. It's the orange-yellow dot below the Great Square of Pegasus.

Jupiter (magnitude –2.6, in southern Ophiuchus) rises in the east-southeast during twilight and dominates the south by 1 a.m. daylight saving time. Antares, less bright, sparkles 8° to its right during the evening, and lower right after midnight. Jupiter will be at opposition on June 5th.

Saturn (magnitude +0.5, in Leo) shines high in the west during evening, far upper left of bright Venus (by 30° to 23° this week). Watch these two closing in on each other. They're on their way to a close conjunction at the end of June.

Uranus (magnitude 6, in Aquarius) is in the east-southeast before dawn.

Neptune (magnitude 8, in Capricornus) is higher in the southeast before dawn.

Pluto (magnitude 14, in northwestern Sagittarius) is not far from Jupiter in the south during early morning hours. 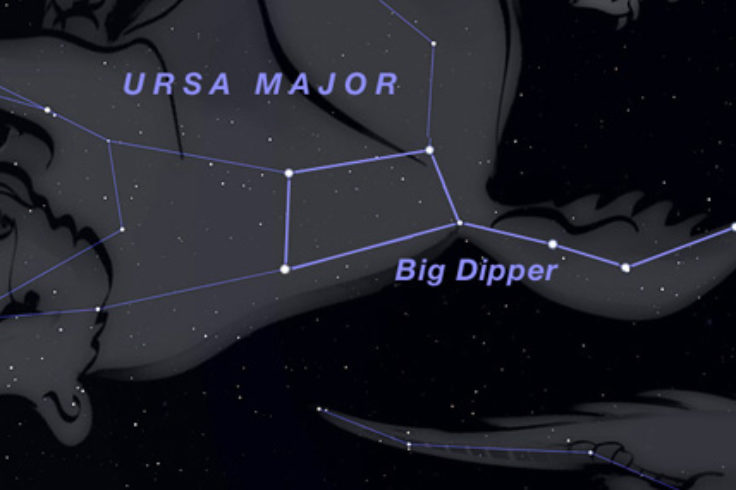