Some daily events in the changing sky for August 17 – 25. 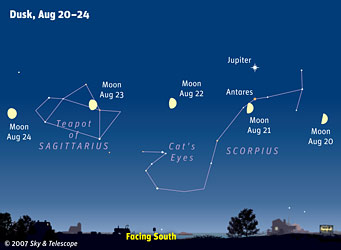 Watch the waxing Moon march eastward against Scorpius and Sagittarius from night to night this week. (These scenes are drawn for the middle of North America. European observers: move each Moon symbol a quarter of the way toward the one for the previous date.)

Jupiter (magnitude –2.3, in southern Ophiuchus) glares in the south-southwest during twilight and lower in the southwest later after dark. Get your telescope on it as early in the evening as you can. Antares, less bright, sparkles redly 5° below Jupiter; the two have been companions all summer. Other stars of Scorpius shine below them and to the right.

Uranus (magnitude 5.7, in Aquarius) and Neptune (magnitude 7.8, in Capricornus) are well up in the southeast by late evening. Uranus is currently in the same telescopic field of view with Phi Aquarii, magnitude 4.2.

Pluto (magnitude 13.9, in the northwestern corner of Sagittarius) is highest in the south as soon as it gets dark, about 18° east-northeast of Jupiter. Finder charts for Uranus, Neptune, and Pluto are in the July Sky & Telescope, page 60.