Some daily events in the changing sky for August 24 – September 1. 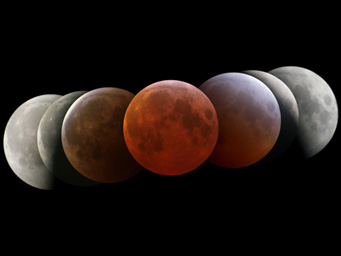 Last March 3rd, Europeans had a fine late-night view of the previous total lunar eclipse. In France, Laurent Laveder captured a series of images to make this composite. The August 28th eclipse, by contrast, will occur low in the west as dawn is brightening for many observers.

Once you get a telescope, to put it to good use you'll need a detailed, large-scale sky atlas (set of maps; the standard is Sky Atlas 2000.0) and good deep-sky guidebooks (such as Sky Atlas 2000.0 Companion or the enchanting though somewhat dated Burnham's Celestial Handbook). Read here how to use them effectively.

Mercury is deep in the glow of sunset.

Venus is emerging from the glow of sunrise, just beginning its grand apparition as the Morning Star for the next half-year. Look for it above the eastern horizon 60 to 40 minutes before sunrise. It's getting a little higher every day. (To find your local sunrise time, make sure you've put your location into our online almanac. If you're on daylight saving time like most of North America, make sure the Daylight Saving Time box is checked.) 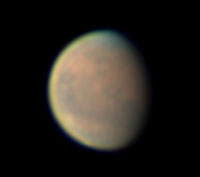 By August 28th, surface features were again showing more normally through Mars's dusty atmosphere, as the past two months' worth of dust activity abated. Just to the right of the central meridian in this image is Sinus Meridiani, where Opportunity has resumed roving. North is up. Sean Walker took this stacked video image through color filters using a DMK 12AF04 camera on a 12.5-inch Newtonian reflector. The time was 8:14 UT August 28th. Mars was (and is) still only 8 arcseconds in diameter.

Mars (magnitude +0.3, in Taurus) rises around midnight daylight saving time and shines very high in the southeast before dawn. It's near twinkly Aldebaran, which is similarly colored but not as bright. Look above them after they rise for the Pleiades; see the sky scene above.

In a telescope Mars is now 8 arcseconds in diameter, half the size it will be around its Christmas-season opposition.

Incidentally: if friends or family tell you they've read that Mars will become as big and bright as the full Moon this week, point them to our article about the regular-as-clockwork August Mars Hoax.

Jupiter (magnitude –2.2, in southern Ophiuchus) glares in the south-southwest during twilight and lower in the southwest after dark. Get your telescope on it as early as possible (though it has shrunk to a small-for-Jupiter diameter of 38 arcseconds). Antares, less bright, sparkles redly 5° below Jupiter; the two have been evening companions all summer. Other stars of Scorpius shine to their right and lower left.

Saturn remains hidden deep in the glow of sunrise.

Uranus, imaged at high power on August 28, 2007, with a 12.5-inch reflector using the stacked-video technique. Visually Uranus appears nowhere near this colorful: pale gray with only a hint of green-blue.

Uranus (magnitude 5.7, in Aquarius) and Neptune (magnitude 7.8, in Capricornus) are well up in the southeast by late evening. This week Uranus fits in the same telescopic field of view with Phi Aquarii, magnitude 4.2.

Pluto (magnitude 13.9, in the northwestern corner of Sagittarius) is highest in the south-southwest as soon as it gets dark, about 18° east-northeast of Jupiter. Finder charts for Uranus, Neptune, and Pluto are in the July Sky & Telescope, page 60.