• Confirm the satellite of an asteroid?! In the early-morning hours of Saturday April 14th, telescope users from the eastern Great Lakes through New England have a chance to catch the asteroid 113 Amalthea occulting an 11th-magnitude star, clouds permitting — and possibly to confirm and characterize Amalthea's small moon, tentatively discovered by amateurs during an occultation last year. Full details, and get finder charts and other helpful materials from the top line here. Good luck!

• After dark, Leo walks horizontally across the meridian high in the south. His brightest star is Regulus, the bottom star of Leo's Sickle. The Sickle forms his front leg, chest, mane, and part of his head.

Not far from Regulus, the red long-period variable star R Leonis this week should still be near its maximum brightness, magnitude 5.4 or so. There's also the tiny Frosty Leo Nebula nearby to hunt out, and galaxy groups to explore. Make a night of it with your scope using Bob King's Put a Little Bit of Leo in Your Life, with finder charts and photos.

• Right after dark, Orion is still in the southwest in his spring orientation: striding down to the right, with his belt horizontal. The belt points left toward Sirius and right toward Aldebaran and, farther on, the Pleiades.

• Vega, the bright "Summer Star," rises in the northeast shortly after dark these evenings, depending on your latitude. Exactly where should you watch for it? Spot the Big Dipper very high in the northeast. Look at Mizar at the bend of its handle. If you can see Mizar's tiny, close companion Alcor (binoculars make it easy), follow a line from Mizar through Alcor all the way down to the horizon. That's where Vega will be.

• Venus and a super-thin crescent Moon form a lovely pair low in the west as twilight fades, as shown here. They're about 5° apart at the time of twilight for the longitudes of the Americas.

• Saturn is at aphelion and the in fact farthest it's been from the Sun (by a trace) since 1959.

• Now the crescent Moon hangs close to Aldebaran at dusk, cradled in the Hyades for skywatcher in North America (as shown here). The Moon occults Aldebaran for parts of northern Canada.

• Arcturus shines brightly in the east these evenings. The Big Dipper, high in the northeast, points its curving handle lower-right down around toward it. Arcturus forms the pointy end of a long, narrow kite asterism formed by the brightest stars of Boötes, the Cowherd. The kite is currently lying on its side to Arcturus's left, as shown here. The kite is 23° long, about two fist-widths at arm's length.

• This evening the dark limb of the crescent Moon will occult 4th-magnitude multiple star Nu Geminorum for parts of the southern U.S. and points south. For rough time estimates at your location, interpolate between the time predictions in the April Sky & Telescope, page 48.

• The Lyrid meteor shower should be weakly active from about midnight tonight until the first light of dawn Sunday morning. The Moon, nearly first quarter, sets around 2 a.m. local daylight-saving time. The shower may produce about a dozen meteors visible per hour for a watcher under an excellent dark sky.

Mercury remains hidden in the glow of sunrise.

Venus (magnitude –3.9) shines brightly in the west in twilight. It sets a little after night becomes complete. In a telescope (look early!) it's a tiny disk 11 arcseconds wide and slightly gibbous: the Sun lights 92% of its width. As night comes on, the Pleiades glitter delicately above it. They move down closer to it every evening.

Mars and Saturn, in Sagittarius, are up after 1 a.m. daylight-saving time. By the beginning of dawn they're two bright points in the south-southeast, above the fainter Sagittarius Teapot. Mars, slightly brighter, is on the left. Their separation widens from 6° on the morning of April 14th to 10° on the 21st.

Mars is brightening on its way to an unusually close opposition in late July. It's 10 arcseconds wide now and magnitude 0.0, compared to Saturn's +0.5. Their color difference is obvious.

Jupiter (magnitude –2.5, in Libra) rises shortly after dark and shines as the brightest point in the late-night sky. It's now just three weeks from its May 8th opposition, so it appears about as bright and big (44 arcseconds wide) as it will get this year. It's highest in the south, presenting the sharpest views in a telescope, around 2 a.m. daylight-saving time.

Uranus is hidden in conjunction with the Sun.

Neptune is deep in the skyglow of dawn.

"Objective reality exists. Facts are often determinable. Vaccines save lives. Carbon dioxide warms the globe. Bacteria evolve to thwart antibiotics, because evolution. Science and reason are not a liberal conspiracy. They are how we determine facts. Civilization's survival depends on our ability, and willingness, to do so."
— Alan MacRobert, your Sky at a Glance editor 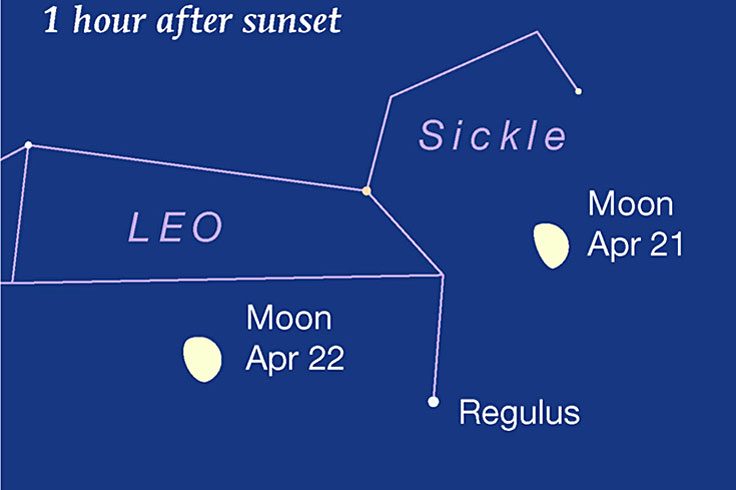