• As soon as it's fully dark, spot the Winter Triangle, bright and equilateral, in the southeast. Sirius is its brightest and lowest star. Betelgeuse, Orion's shoulder, stands above Sirius by about two fists at arm's length. Left of their midpoint is Procyon.

And, glimmering 4° above Procyon is 3rd-magnitude Gomeisa, Beta Canis Minoris, the only other easy naked-eye star of Canis Minor.

• The sky's biggest asterism — at least the biggest that's widely recognized — is the Winter Hexagon. It fills the sky toward the east and south these evenings.

Start with brilliant Sirius at its bottom. Going clockwise from there, march up through Procyon, Pollux and Castor, Menkalinan and Capella on high, down to Aldebaran, then to Rigel in Orion's foot, and back to Sirius.

• In this dark-of-the-Moon time, use binoculars to get acquainted with the double stars and asterisms in and around the familiar Hyades.

A few degrees north of Aldebaran and the main Hyades V pattern (mapped at right) are two asterisms I call the Jumping Minnow and Dragonfly, imagining warm summer afternoons by a riverbank far from these icy winter nights. But Matt Wedel has a different take on them in his Binocular Highlight column in the February Sky & Telescope, page 43.

The Hyades V, like the Minnow and Dragonfly, has noteworthy star pairs for your binocs that help define its unique look. Click over to Bob King's Happy Nights with the Hyades for details and more maps.

• Algol is at minimum brightness for a couple hours centered on 11:55 p.m. EST (8:55 p.m. PST). It takes several additional hours to fade and to rebrighten.

• Have you ever closely compared the colors of Aldebaran and Betelgeuse? Can you detect any difference in their colors at all? I can't, really. Yet Aldebaran, spectral type K III, is often called an "orange" giant, while Betelgeuse, spectral type M1-M2 Ia, is usually called a "red" supergiant. Their temperatures are indeed a bit different: 3,910 kelvin and 3,590 kelvin, respectively.

A complication: Betelgeuse is brighter, and to the human eye, the colors of brighter objects appear, falsely, to be desaturated: tending paler (whiter) than they really are.

Mars, off in the southwest, looks to me slightly redder than either of them.

• Sirius the Dog Star blazes high in the south-southeast after dinnertime, the brightest star of Canis Major. In a dark sky with lots of stars visible, the constellation's points can be connected to form a convincing dog profile. He's currently standing on his hind legs; Sirius is on his chest.

But through the light pollution where most of us live, only his five brightest stars are easily visible. These form a short-handled meat cleaver. Sirius is the cleaver's top back corner, its blade faces right, and its handle is down below, pointing lower left.

• By 9 p.m. or so, the Big Dipper stands on its handle well up in the northeast. In the northwest, W-shaped Cassiopeia also stands on end (the W's brighter end) at about the same height.

• And while you're checking that out: Algol is at minimum brightness for a couple hours centered on 8:45 p.m. EST.

• After dinnertime look due east, not very high, for twinkly Regulus. Extending upper left from it is the Sickle of Leo, a backward question mark. "Leo announces spring," goes an old saying. Actually, Leo showing up in the evening announces the cold, messy back half of winter. Come spring, Leo will already be high.

• The waxing crescent Moon shines in the west-southwest at nightfall. Above it by about two fists at arm's length is Mars, diminished far into the distance since its grand display last summer.

• Now the Moon is about one fist below Mars right after dark. Look to the Moon's right for the dimmer Great Square of Pegasus, balancing on one corner.

• Under the feet of Orion hides Lepus the Hare. Like Canis Major, this constellation has a connect-the-dots that really looks like what it's supposed to be. He's a crouching bunny, with his nose pointing lower right, his faint ears extending up toward Rigel (Orion's western foot), and his body bunched to the left.

His brightest two stars, 3rd-magnitude Beta and Alpha Leporis, form the front and back of his neck. At nightfall this week they're straight below Rigel, by about one fist.

Mercury is buried deep in the sunset. But later this month, it will climb up into its best evening apparition of the year.

Venus (magnitude –4.3) and Jupiter (magnitude –1.9) rise long before the first glimmer of dawn. By the time dawn begins to brighten, they dominate the southeast.

Each morning Jupiter appears 1° farther upper right of Venus. On February 2nd they're separated by 10°, on February 9th by 17°.

About 10° to the right of Jupiter, look for twinkly orange Antares. At magnitude +1.0 it's not nearly as eye-catching.

In a telescope Venus is dazzling white and gibbous. Jupiter appears half again as large as Venus, but its surface brightness is some 50 times dimmer — due mostly to Jupiter's 7-times-greater distance from the illuminating Sun.

Mars (magnitude +0.8, in Pisces) still glows high in the southwest at nightfall and sets around 11 p.m. In a telescope it's a tiny gibbous blob: 6 arcseconds from pole to pole.

Saturn is beginning to emerge low in the glow of dawn. About 30 or 40 minutes before sunrise, use binoculars to look for it far to the lower left of Venus.

Uranus (magnitude 5.8, at the Aries-Pisces border) is well up in the southwest right after dark, near Mars. It's visible in binoculars if you have a good finder chart (and know the constellations well enough to see where to start with the chart).

Uranus will pass less than 1° from Mars on February 11th through 13th. Stay tuned!

Neptune (magnitude 7.9, in Aquarius) is sinking very low in the west-southwest right after dark.

I was out last night with clear skies and a heat wave, temp near 6C Mars in Pisces was the target using my 90-mm refractor. The gibbous shape planet is 6" size and 89.6% illuminated. However, at 179x view I could see a hint of surface area still, orange-red-yellow color obvious. The Sky & Telescope tool shows Mars central meridian when I viewed (1730-1900 EST) was near 25 degrees with some mare dark areas. At 71x with 1-degree true field of view, I could see more than a dozen stars around Mars in Pisces with Mars centered. Very nice view here. Mars small size still resolved at 71x with orange-red color distinct. Since 06-Jan-18 when Mars and Jupiter had close alignment in Libra, I have logged 50 Mars observations. It has been enlightening observing all the changes exhibited in Mars for more than one year now as Mars and the Earth keep changing their positions around the Sun. Tonight there was a star < 1' angular separation from Mars in Pisces. The star is TYC614-525-1. SIMBAD portal shows as HD 8693 too, apparent magnitude +9.37, stellar parallax 8.4233 mas or 387 LY distance from Earth. Mars was 1.561 astronomical units from Earth tonight. At 179x view, Mars and the star zipped across the field of view rapidly requiring frequent adjustments to keep Mars aligned near center of field of view. The Earth is rotating :). 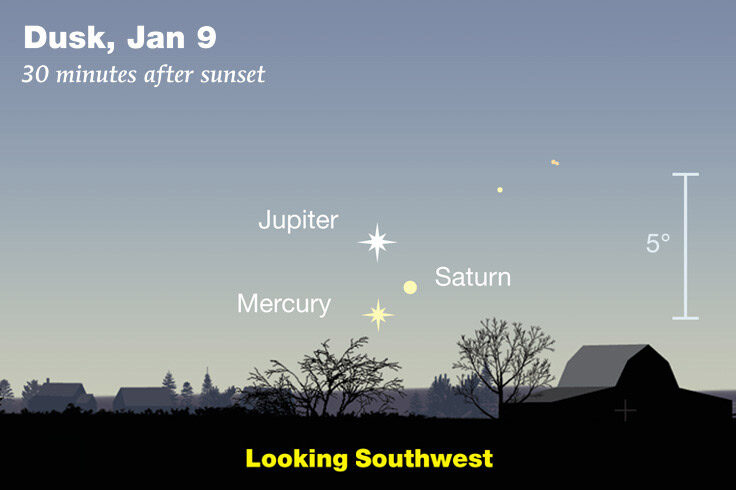