• Winter still has a month to go, but a preview of spring stars awaits you if you step outside after about 11 p.m. By then tonight, the waning gibbous Moon will have risen in the east. Look for Spica to its lower right by about 7° (less than a fist at arm's length). Four times farther to the Moon's upper left shines brighter Arcturus, pale yellow-orange. Both are iconic stars of warm spring evenings.

• Sirius and M41. Sirius is the brightest star in the south these evenings, sparkling pure white. Use binoculars to examine the spot 4° south of Sirius (directly below it around 8 or 9 p.m. now). Four degrees is somewhat less than the width of a typical binocular's field of view. Can you see a little patch of speckly gray haze? That's the open star cluster M41, about 2,200 light-years away. Sirius, by comparison, is only 8.6 light-years distant.

• These moonless evenings of late winter are a fine time to look for the zodiacal light if you live in the mid-northern latitudes. Why? This is the time of year when the ecliptic tilts most steeply upward from the western horizon at nightfall.

From a clear, clean, dark location, look west at the end of twilight for a vague but huge, tall pyramid of pearly light. It's tilted to the left, aligning along the constellations of the zodiac.

What you're seeing is sunlit interplanetary dust orbiting the Sun near the ecliptic plane. Believe it or not, seen from interstellar distances this would be the solar system's most visible feature after the Sun itself. The zodiacal light is very big, making up for its dim surface brightness.

• Have you ever seen Canopus, the second-brightest star after Sirius? It's almost due south of Sirius: by 36°. That's far enough south that it never appears above your horizon unless you're below latitude 37° N (southern Virginia, southern Missouri, central California). And there, you'll need a very flat south horizon. Canopus passes over the south point on your horizon just 21 minutes before Sirius does.

When to look? Canopus is due south when Beta Canis Majoris — Murzim the Announcer, the star about three finger-widths to the right of Sirius — is at its highest due south over your landscape. That's about 8 p.m. now, depending on how far east or west you are in your time zone. Look straight down from Murzim then.

• Right after dark, bright Capella shines near the zenith. Face west-northwest and look 20° (two fists) down toward that direction from Capella. The brightest star there is Alpha Persei, Mirfak. Around and upper left of it is the Perseus OB1 Association, a loose swarm of modestly bright stars about the size of your thumbtip at arm's length. They show well in binoculars.

• Going deeper? Certain deep-sky objects hold secret surprises within or near them. Get out your telescope and sky atlas for a go at Bob King's eight Hidden Gems in Common Deep-Sky Objects now in evening view.

Usually Algol is a close match for Almach (Gamma Andromedae) now 12° below or lower right of it. But when Algol is deep in eclipse it's obviously fainter.

• Tonight the waning Moon rises around 2 a.m. in close company with Jupiter. By dawn Wednesday the 27th they shine in the south-southeast, as shown here.

• After dark at this time of year, five carnivore constellations come out of hibernation in a row from the northeast to south. They're all seen in profile with their noses pointing up and their feet (if any) to the right. These are Ursa Major the Big Bear in the northeast (with the Big Dipper its brightest part), Leo the Lion in the east, Hydra the Sea Serpent in the southeast, Canis Minor the Little Dog higher in the south-southeast, and bright Canis Major the Big Dog in the south.

• As February turns to March, Sirius shines highest in the south in early evening. Its faint white-dwarf companion star, the first super-dense object ever discovered, is a notoriously difficult telescopic sighting for amateurs. But for nearly a decade to come, Sirius B appears about as far from Sirius A as it ever does. And the time to try is when Sirius is highest! For tips on detecting it (11 arcseconds east-northeast of Sirius A), see Bob King's Sirius B — a New Pup in My Life.

And for more about this and other telescopic targets in Canis Major, turn to Sue French's Deep-Sky Wonders column in the February Sky & Telescope, page 54.

• The crescent Moon in Friday's early dawn offers you Saturn a few degrees to its left, as shown above (for North America).

• This is the time of year when Orion stands straight upright due south as the stars come out. Later in the evening, and later in the month, he begins his long tilt down toward the west.

• Algol is at its minimum light, magnitude 3.4 instead of its usual 2.1, for about two hours centered on 7:19 p.m. EST. Whenever you glance up at Algol at a random time, you have only a 1 in 30 chance of catching it at least a magnitude fainter than normal.

• Now in Saturday's dawn, the low crescent Moon introduces Venus to its left, the "star" of the morning show.

• Look east after dusk this week for the constellation Leo already climbing well up the sky. Its brightest star is Regulus, and the Sickle of Leo extends upper left from there.

Mercury is having a nice evening apparition. Look for it low in the west as twilight fades. But Mercury dwindles in brightness by about half this week, from magnitude –0.8 to 0.0. Still, there's nothing in that part of the sky that's nearly as bright to confuse it with (except airplanes!)

Venus (magnitude –4.1), Jupiter (magnitude –2.0), and Saturn (magnitude +0.6) all rise well before dawn begins. As dawn gets under way Venus shines in the low southeast, and Jupiter is the bright dot three or four fists at arm's length to its upper right. Look for Saturn, much fainter, about sixth to a third of the way from Venus to Jupiter. The line is lengthening; all three planets move a little farther away from each other each morning.

To Jupiter's right look for fainter, orange Antares. They're 13° apart.

In a telescope Venus is dazzling white and gibbous. Jupiter appears twice as large in apparent diameter, but its surface brightness is some 50 times dimmer.

That's mostly due to Jupiter's 7-times-greater distance from the illuminating Sun. You may be surprised to learn that both Venus and Jupiter have similarly bright albedos (reflectivity). Jupiter's cloudtops reflect an average 52% of the sunlight that hits them, while the clouds of Venus reflect 65%. Pictures of Jupiter are rarely displayed in a way that shows this similarity; imagers (and websites and magazines) usually prefer to increase the darkness and contrast of Jupiter to emphasize details in its clouds.

Mars (magnitude +1.1, in Aries) still glows high in the west-southwest at nightfall and sets around 11 p.m. In a telescope it's a tiny blob hardly more than 5 arcseconds wide. Be patient. Not until October 2020 will Mars come to opposition and swing (relatively) close by Earth again.

Uranus (visible in binoculars at magnitude 5.8, at the Aries-Pisces border) hides below Mars. Finder chart (without Mars). Look just after dark while Uranus is still fairly high.

Damian Peach made this full-rotation composite of Jupiter from images he took last May around the time of Jupiter's opposition, using a 14-inch Schmidt-Cassegrain telescope on Barbados. In software, he mapped the images onto a virtual globe with Jupiter's slightly ellipsoidal shape. North is up.

I enjoyed viewing the waning crescent Moon in Ophiuchus and Jupiter close to 2 degree angular separation from the Moon early this morning. I viewed Jupiter with my telescope (could see belt clouds and Galilean moons at 31x) and with 10x50 binoculars, I was able to fit both in the binocular field view along with the star Xi Ophiuchi close to the lunar limb. This was near 0545 EST. Very nice views this morning. Jupiter close to 5.47 au distance, the Moon near 392000 km distance and the star, Xi Ophiuchi about 57 light-years away. mary beth - here in Maryland I have enjoyed clear skies since Sunday night. Out viewing in Cancer, Canis Major, and Puppis in the evenings. Hope you have been enjoying some good stargazing too in Houston.

Hi Rod! I’m at the Crescent Moon Inn Jupiter were a beautiful site! Unfortunately we’ve had a week or more of rain, this is been the wettest winter I can ever remember in Houston and I’ve lived here my whole life. No clearing until Tuesday. So for now I am living vicariously through your posts! I was able to see Orion and a few other stars through the clouds very briefly this week. I can hardly wait to see everything Tuesday night. I’m clearing my calendar so nothing is going to stop me. As usual it will amaze me how much further the stars are positioned. Spindle of necessity! 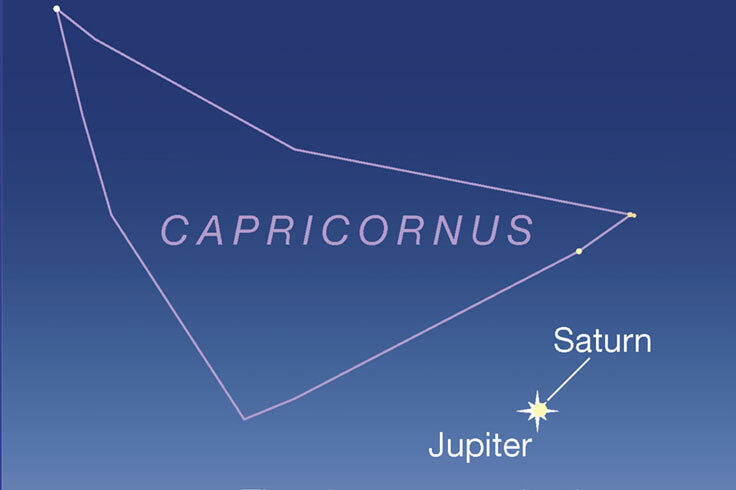