• The Mars-Antares-Saturn triangle shows a little higher at dusk every night. And it's changing shape, as Mars stretches westward away from the head of Scorpius. Mars will continue this westward (retrograde) motion until the end of June. Then it will start to slingshot back eastward, to fly right between Antares and Saturn on August 23rd and 24th.

• On June evenings, Cassiopeia lurks low in the north: a wide, upright W, as shown below. The farther north you are the higher it'll appear, but even as far south as San Diego and Atlanta it's completely above the horizon.

• For much of the spring at mid-northern latitudes, the Milky Way lies right down out of sight all around the horizon. But watch the east now. The rich Cepheus-Cygnus-Aquila stretch of the Milky Way starts rising up across the eastern sky late these nights, earlier and higher each week.

• Is your sky dark enough for you to see the Coma Berenices star cluster naked-eye? As soon as twilight is completely over, look above Jupiter by about 25°, about two and a half fists at arm's length. The cluster is dim but big, at least 5° wide, the size of a golf ball at arm's length. Its brightest stars, near its middle, form a sort of inverted Y shape. Binoculars will be a big help.

• As darkness arrives these evenings, look south about halfway between Jupiter and Mars. One star there stands out: Spica, in Virgo. High above it shines brighter Arcturus in Bootes. Half as far to Spica's lower right is the constellation Corvus, the Crow, eyeing Spica to steal it from Virgo's hand.

• With June well under way, the Big Dipper has swung around to hang down by its handle high in the northwest during evening. The middle star of its handle is Mizar, with tiny little Alcor right next to it. On which side of Mizar should you look for Alcor? As always, on the side facing Vega! Which now shines in the east-northeast.

• Look upper left of the thick crescent Moon at nightfall for Regulus, as shown here. Upper left of Regulus by 14° shines Jupiter, much brighter.

• A 3-inch telescope will show Saturn's biggest and brightest moon, 8.5-magnitude Titan. Tonight it's east of Saturn, by about four times the length of Saturn's rings. Can you see its orange tint?

• This evening's Moon poses partway between Jupiter to its upper left and fainter Regulus to its right, as shown here.

• Turn binoculars or a telescope on Jupiter, and you'll find 5th-magnitude Chi Leonis some 0.1° to its north, looking like an out-of-place Galilean satellite.

• The first-quarter Moon shines fairly close to Jupiter this evening (about 4° to Jupiter's left). But looks are deceiving! Jupiter is 40 times larger in diameter than the Moon, and it's currently 2,100 times farther away in the distance.

Mercury (about magnitude +0.5) is having a very poor apparition in the dawn. You can use binoculars to try for it very low, a little left of due east, 20 or 30 minutes before your local sunrise time.

Venus is out of sight, in superior conjunction with the Sun.

Mars is still at its closest to Earth in a decade (it was exactly closest on May 30th). It's the bright yellow-orange thing (magnitude –1.9) low in the southeast during evening, shining at the head of Scorpius. Mars was at opposition on May 22nd; it gets a little higher each evening. After dark, yellow Mars shines as brightly as white Jupiter in the southwest.

At dusk, look lower left of Mars by about 14° for Antares, then upper left of Antares by 7° for brighter Saturn. The Mars-Antares-Saturn triangle stands highest in the south around midnight daylight-saving time, when the planets are likely to appear sharpest in a telescope.

Mars shrinks just a trace this week, from 18.6 to 18.3 arcseconds in diameter. See our telescopic guide to Mars, with map, in the April Sky & Telescope, page 48, or the version online. And set our Mars Profiler for your time and date. If you're ambitious and have a big scope, now's the time to hunt Phobos and Deimos, the two tiny Martian moons, using the June Sky & Telescope, page 48.

Jupiter (magnitude –2.0, in southern Leo) stands high in the southwest during twilight. It moves to the lower left as the evening progresses. See our telescopic guide to Jupiter in the March Sky & Telescope, page 48.

Saturn (magnitude 0.0, in southern Ophiuchus) is barely past its June 2nd opposition. Look to Saturn's lower right for fainter Antares. See our telescopic guide to Saturn in the June Sky & Telescope, page 48.

Uranus (magnitude 5.9, in Pisces) is barely emerging from the glow of dawn low in the east.

Neptune (magnitude 7.9, in Aquarius) is fairly well up in the southeast just before dawn begins.

Neat thing you mentioned about the image of Mars that Christopher Go took. I immediately thought of it myself when I read the date that the image was taken on because I just looked at Mars and saw only its "duller" side. That is so unreal how people on one side of Earth are always seeing a different side of Mars. 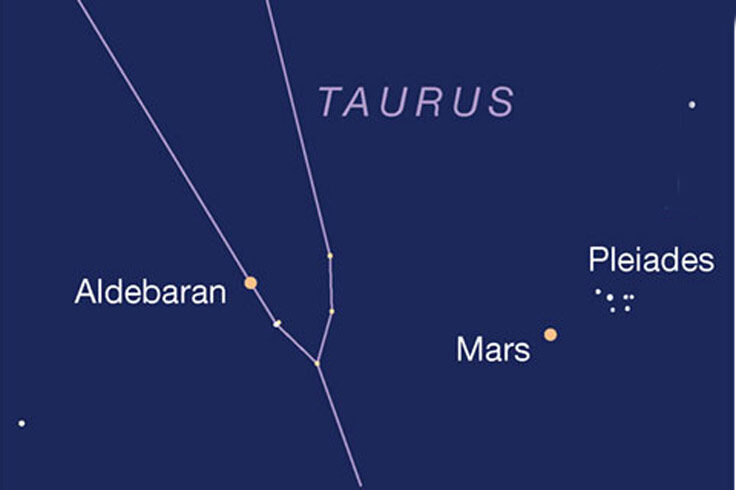