• Keep a watch on the changing patterns Venus makes with its background stars from week to week. As Aldebaran and the Pleiades sink away, Beta Tauri (El Nath) above Venus closes in.

• Summer is seven weeks off, but the Summer Triangle is making its appearance in the east, one star after another. The first in view is Vega. It's already shining low in the northeast as twilight fades out.

Next up is Deneb, lower left of Vega by two or three fists at arm's length. Deneb takes about an hour to appear after Vega does, depending on your latitude.

The third is Altair, which shows up far to their lower right by midnight.

• As dawn begins on Saturday morning May 5th, the waning gibbous Moon shines between Saturn and Mars, as shown here.

• The Eta Aquariid meteor shower should be active before the first light of dawn Sunday morning. It's usually the best shower of the year for the Southern Hemisphere, but northerners have a poorer view of it. Moreover, the light of the waning gibbous Moon will interfere.

• On Sunday morning May 6th the Moon shines with Mars, as shown here.

• Here's a challenge: With Jupiter just two days from opposition, it's currently casting its shadow in space almost exactly away from us. But not precisely so. An eclipse of Io tonight offers a test. At 1:35 a.m. EDT (10:35 p.m. PDT), Io disappears into eclipse by Jupiter's shadow while hanging smack on Jupiter's western (preceding) edge. In your telescope, can you detect that Io fades out just barely off Jupiter's limb rather than behind the limb itself?

• Jupiter is at opposition tonight — opposite the Sun as seen from Earth — and about at its closest and brightest for the year. See our telescopic guide to Jupiter in the May Sky & Telescope, page 48.

• Arcturus is the brightest star very high in the east these evenings. Spica shines about three fists at arm's length to its lower right. To the right of Spica by half that distance is the distinctive four-star constellation of Corvus, the springtime Crow.

• These spring nights, the long, dim sea serpent Hydra snakes along level far across the southern sky. Find his head, a rather dim asterism about the width of your thumb at arm's length, in the southwest. (It's lower right of Regulus by about two fists at arm's length. Also, a line from Castor through Pollux points to it about 2½ fists away.) Lower left of this is Hydra's heart, orange Alphard. Hydra's tail stretches all the way to Libra in the southeast. Hydra's star pattern, from forehead to tail-tip, is 95° long.

• In the early-morning hours of Friday, the asteroid 472 Roma should occult a 10.8-magnitude star in Serpens Caput for telescope users along a path from northern California through Georgia. Details and finder charts.

• The Arch of Spring spans the western sky in late twilight. Pollux and Castor form its top: they're lined up roughly horizontally in the west-northwest, about three finger-widths at arm's length apart. Look far to their lower left for Procyon, and farther to their lower right for Menkalinan and then bright Capella.

Venus glares below the Arch. Two fists at arm's length left or lower left from Venus, look for Betelgeuse twinkling on its way out.

• Three zero-magnitude stars shine after dark in May: Arcturus very high in the southeast (high above Jupiter), Vega much lower in the northeast, and Capella in the northwest (upper right of Venus). They appear so bright because each is at least 60 times as luminous as the Sun, and because they're all relatively nearby: 37, 25, and 42 light-years from us, respectively.

Mercury (magnitude 0) is having a very low, poor apparition deep in the glow of sunrise. Using binoculars, look for it 15 or 20 minutes before sunrise barely above the east horizon. Nothing else there is as bright.

Venus (magnitude –3.9) shines brightly in the west-northwest during evening twilight and just after. It's nearly as high as it will get all this spring and summer. In a telescope (look early!) Venus is a little disk 12 arcseconds wide and slightly gibbous: 87% sunlit.

Mars and Saturn rise late at night, around 1:30 a.m. and midnight, respectively (daylight-saving time). They're on opposite sides of Sagittarius, shining at magnitudes –0.5 and +0.3, respectively, with Mars on the lower left. Saturn is above the Teapot. By early dawn they're higher in the south.

Their separation widens from 17° on the morning of May 5th (when the Moon shines between them) to 20° on May 12th.

Mars is brightening on its way to an unusually close opposition in late July. Already it's 12 arcseconds wide. What detail can you see on it in your scope? You'll want a Mars map that identifies what features are facing Earth at the time and date you look, such as our free Mars Profiler.

Jupiter (magnitude –2.5, in Libra) is at opposition this week: exactly so on May 8th. It's the brightest point in the sky after Venus sets below the opposite horizon. Jupiter is now as bright and big (44.8 arcseconds across its equator) as it will appear this year.

It's highest in the south, presenting the sharpest views in a telescope, around midnight or 1 a.m. daylight-saving time. By dawn it's very low in the west-southwest.

Uranus is hidden in the glow of dawn.

Neptune is still very low before the beginning of dawn; wait a few more weeks.

"Objective reality exists. Facts are often determinable. Vaccines save lives. Carbon dioxide warms the globe. Bacteria evolve to thwart antibiotics, because evolution. Science and reason are not a liberal conspiracy. They are how we determine facts. Civilization's survival depends on our ability, and willingness, to do so."
— Alan MacRobert, your Sky at a Glance editor 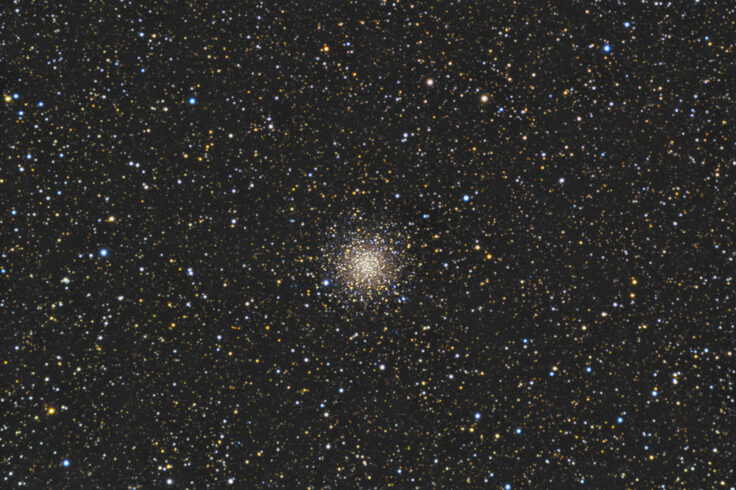 Night at the (Celestial) Museum 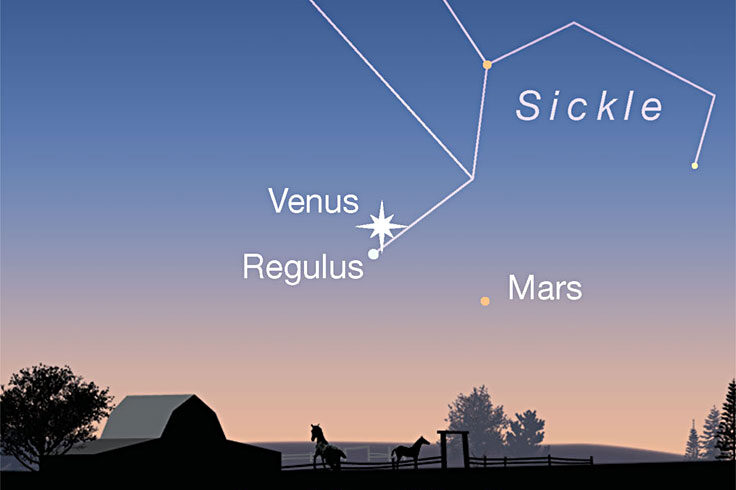 In Heaven with M7, a Portal Into the Deep 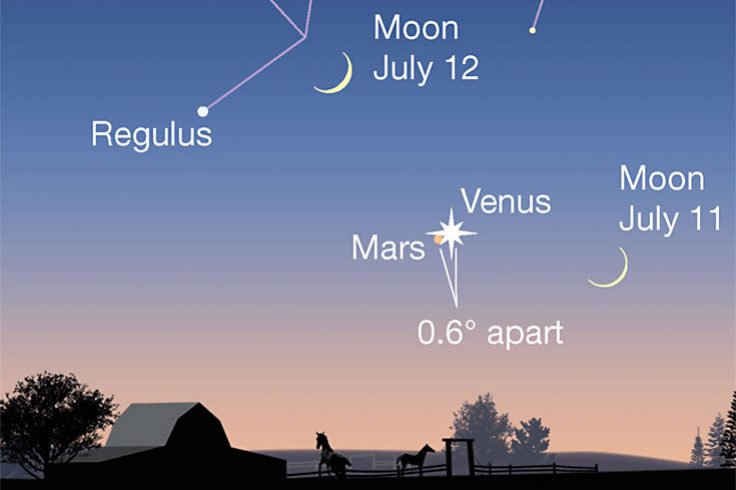 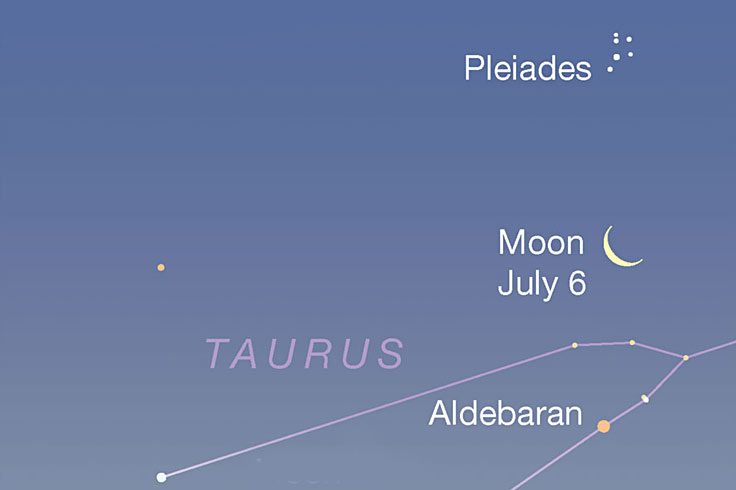 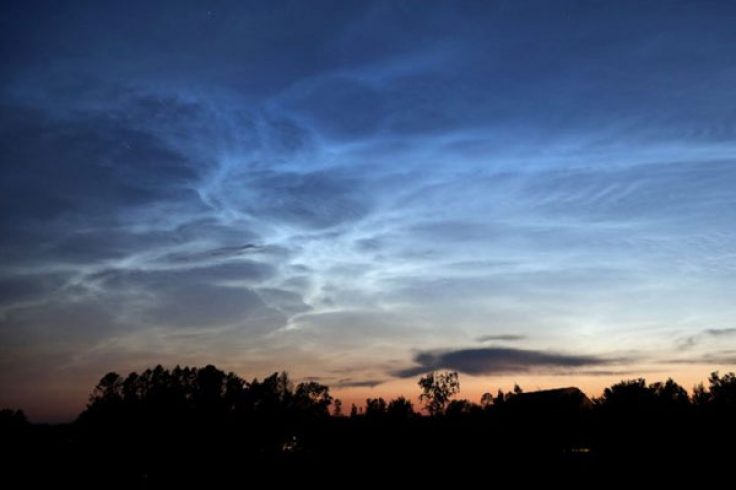 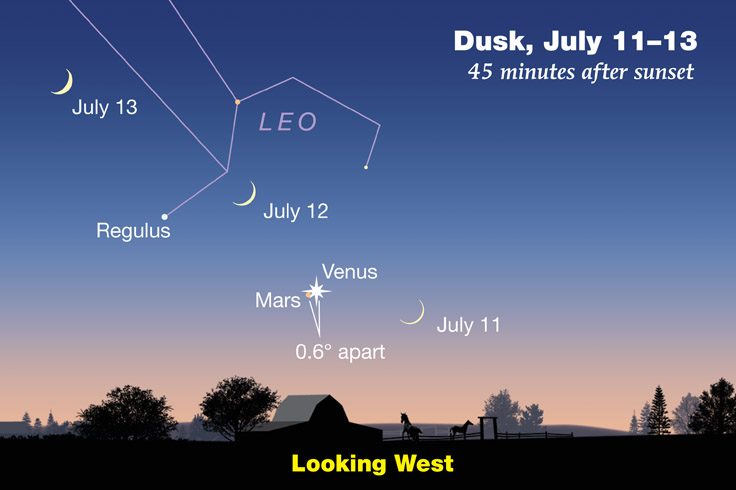 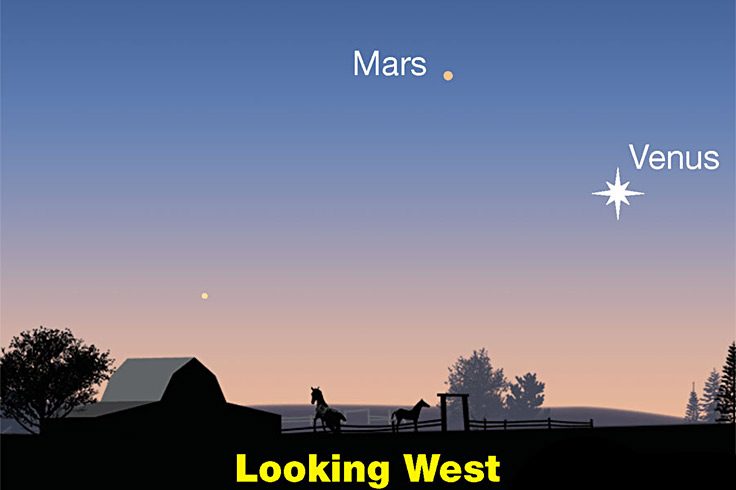