• Two challenge planets! No more than 20 or 30 minutes after sunset, scan with binoculars low in the southwest for Saturn over Mercury as shown at right. Today they're 4° apart. In the coming days Saturn will move down a little closer to Mercury, passing to its upper right.

• Whenever Fomalhaut "souths" — crosses the meridian due south, which it does around 7 p.m. this week — the first stars of Orion are just about to rise above the eastern horizon. And, the Pointers of the Big Dipper stand upright due north, straight below Polaris.

• The bowl of the Little Dipper is descending the northern sky in the evening at this time of year, left or lower left of Polaris. By about 11 p.m. it hangs straight down below Polaris.

• First-quarter Moon (exact at 12:03 p.m.). The Moon shines straight above Fomalhaut as the stars come out at dusk. The Moon appears to move to the upper right of the lonely star as the sky turns and evening grows late.

• The Moon, below the Great Square of Pegasus, forms a big triangle with Fomalhaut to its lower right, and orange Beta Ceti less far to the Moon's lower left (for North America and Europe).

• After dark this evening, look below the waxing gibbous Moon for Beta Ceti and above it for the Great Square of Pegasus.

• The five brightest stars of Cassiopeia are usually called a W, but now Cas is turning over to become a wide M, riding very high in the north by late evening.

• Bright Vega still shines well up in the west-northwest after dark. The brightest star above it is Deneb, the head of the big Northern Cross, which is formed by the brightest stars of Cygnus. At nightfall the shaft of the cross extends lower left from Deneb. By about 11 or midnight, the cross plants itself more or less upright on the northwest horizon.

• The bright waxing gibbous Moon shines in the east this evening. Look upper right of it for the two brightest stars of Aries, left of it for the little Pleiades cluster, and below the Pleiades for orange Aldebaran.

• The nearly-full Moon shines in Taurus this evening, upper right of Aldebaran and below or lower right of the Pleiades.

Does the Moon look just a trace bigger than usual? You're right! Tomorrow's full Moon is a "supermoon," in fact the closest full Moon of the year.

• Now that the Pleiades and Aldebaran are up in due east, can Orion be far behind? Orion's entire iconic figure, formed by its brightest seven stars, takes about an hour and a quarter to cross the horizon below them. By 10 p.m. Orion is well up in fine pre-winter view, under the Moon.

Mercury and Saturn (magnitudes –0.4 and +0.5, respectively) are very low in the sunset afterglow, as shown in the first panels above. Scan for them with binoculars in the southwest no more than 20 or 30 minutes after sunset.

First up is Mars, the dimmest, accompanied by Spica.

Jupiter rises well to their lower left a little before dawn begins.

Venus is getting extremely low and tough to spot as dawn grows bright! Look for it to rise far lower left of Jupiter. Their separation widens from 13° on the morning of November 25th to 20° on December 2nd. Jupiter is getting higher; Venus is sinking away.

Uranus (magnitude 5.7, in Pisces) and Neptune (magnitude 7.9, in Aquarius) are well placed in the southeast and south in early evenings. Use our finder charts online or in the October Sky & Telescope, page 50.

"Objective reality exists. Facts are often determinable. Vaccines save lives. Carbon dioxide warms the globe. Bacteria evolve to thwart antibiotics, because evolution. Science and reason are not fake news, not a liberal political conspiracy. Civilization's survival depends on our ability, and willingness, to use them."
— Alan MacRobert, your Sky at a Glance editor 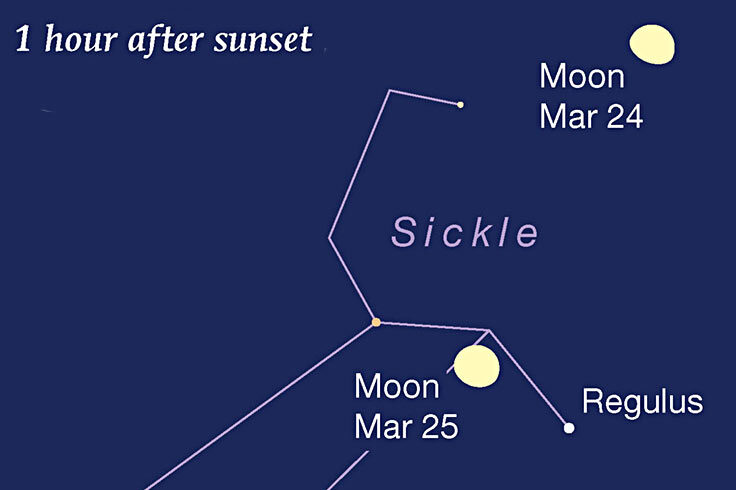