Venus, Saturn, and Mercury are bunched unusually close together low in the twilight. Watch them shift positions from one evening to the next. Click on the image to download an animation (a 537-kilobyte .mov file) showing the planets changing positions from night to night through July 9th. In addition, publication-quality versions of individual frames are available for the following dates: June 22, June 24, June 26, June 28, July 8. You're invited to use them however you wish, as long as Sky & Telescope is properly credited.

An unusual sight has lined itself up for skywatchers this week. Gaze low toward the west-northwest in the deepening twilight, and three planets will await your view. One is bright; two are much fainter. You can follow them through their celestial gyrations as they shift position day by day, as shown here and below. If you've got binoculars, bring them along — especially if summer haze and humidity are bringing you less than crystal-clear skies.

By far the brightest of the planets is Venus, the "Evening Star." Dimmer Saturn has been closing in on it from the upper left, while Mercury has been closing in on Venus from the lower right. All three planets fit within a circle 5° wide from June 22nd through 29th. They form a remarkably tight bunch on June 25th and 26th, fitting within a 2° circle (about the size of your thumb held at arm's length). This is the best "trio" of planets until at least the year 2030, based on brightness, closeness, and ease of visibility.

Venus and Mercury are now extraordinarily close together! Bring binoculars or a telescope.

After that, Saturn gets lower every day and sinks out of sight, while Venus and Mercury remain closely paired into the first week of July. The crescent Moon will hang with Mercury and Venus on July 8th. Meanwhile, the background stars Pollux and Castor add to the scene, though for these binoculars may be required.

A fourth bright planet is also in evening view, very far off to the upper left of the group of three. This is Jupiter, shining brilliantly high in the southwest (not shown here). Aside from Venus, it's the brightest point of light in the sky — and very easy to spot.

That makes four of the five classical naked-eye planets visible at dusk. The fifth, Mars, is visible before and during dawn, shining orange in the southeastern sky.

Mercury is fading now, and Saturn is getting very low. The blue 10° scale is about the width of your fist held at arm's length.

Watch the waxing Moon pass the remaining planets — especially on Friday, July 8th. These scenes are drawn exact for the middle of North America. European observers: move each Moon symbol a quarter of the way toward the one for the previous date. For clarity, the Moon is drawn three times actual size. 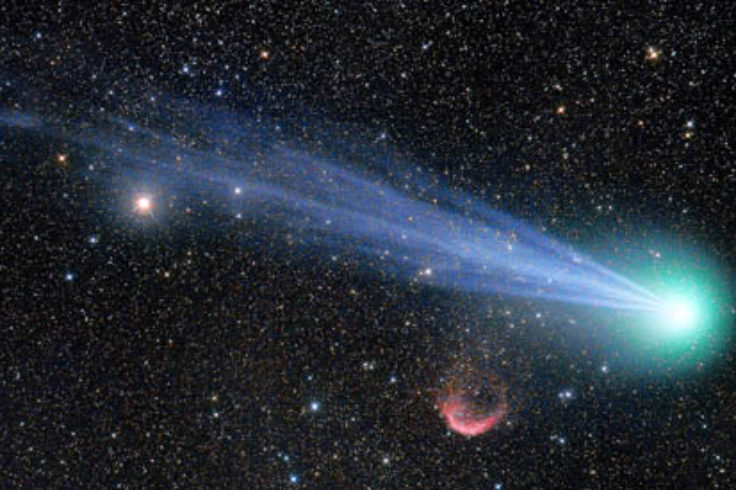