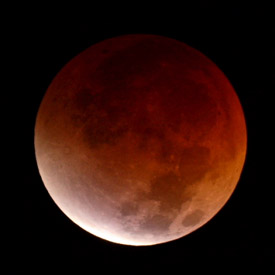 The last sunlit rim of the Moon was about to slip into the Earth's red shadow when Dennis di Cicco of Sky & Telescope took this picture on Aug. 28, 2007. It's easy to take good eclipse shots. Use a long lens and a tripod for your camera if you have an SLR, or just point any digital camera into a telescope. For best results see our lunar eclipse photography guide.


Sky & Telescope / Sean Walker
The full Moon is going to get totally eclipsed on the night of February 20–21, putting on a gorgeous show as it glides through Earth's shadow. Skywatchers in nearly the entire Western Hemisphere will get an excellent view.

Earth’s shadow will totally engulf the Moon from 10:00 to 10:52 p.m. Eastern Standard Time, or 7:00 to 7:52 p.m. Pacific Standard Time, as shown at lower right. The partial phases of the eclipse last for about an hour and a quarter before and after totality.

Unlike a solar eclipse, each stage of a lunar eclipse is visible to everyone on the Moon-facing side of Earth at once; we’re all looking together. 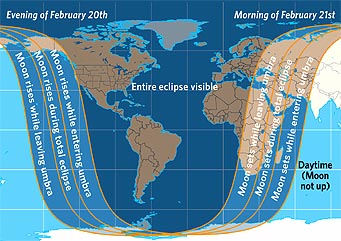 Observing prospects for Americans couldn't be better during February 20th's total lunar eclipse. In Europe and Africa, the eclipse occurs on the morning of the 21st. Click map for larger view.

This means that on the West Coast and in Alaska and Hawaii, the eclipse will already be in progress when the Sun sets and the Moon rises on the evening of the 20th. Europe and West Africa see the eclipse high in the sky during the dark morning hours of the 21st, and in the rest of Africa, the Middle East, and Central Asia, the eclipse will still be under way when the Moon sets and the Sun rises on the 21st. The world map at right tells the story.

Stages of the Eclipse

The eclipse technically begins when the Moon’s edge first enters the penumbra, or pale outer fringe, of Earth’s shadow. But the shading in the outer part of the penumbra is extremely slight. Not until the Moon’s leading edge is about halfway across the penumbra does the first slight dimming become detectable to the eye. This penumbral stage of the eclipse becomes much more evident as the minutes advance and the Moon moves deeper in. 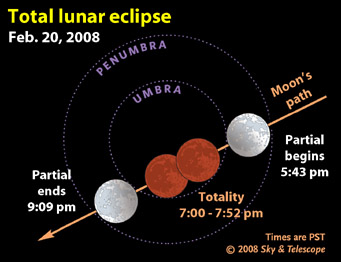 February 20th's total lunar eclipse will be a prime-time event for skywatchers in the US and Canada. Totality lasts 52 minutes, with mid-eclipse occurring at 7:26 p.m. PST. (To get times for your location, add 1 hour for Mountain time, 2 for Central, 3 for Eastern, and 4 for Atlantic.)

The second stage is partial eclipse. This begins much more dramatically, when the Moon’s edge crosses into the umbra, the inner part of Earth’s shadow where no direct sunlight reaches the Moon's surface. Few sights in astronomy are more eerie and impressive than watching this deep shadow creeping, minute by minute, across the Moon's bright face.

Early in the partial eclipse comes a special moment of recognition: when you first see that Earth’s shadow has a curved edge — and realize, just like astute observers in ancient times, what this means: the planet we live on is round. (See picture below).

Total eclipse begins when the last bit of the Moon slips into the umbra. For this eclipse, totality will last 52 minutes. On rare occasions it can persist for as long as 106 minutes.

Then, as the Moon continues moving eastward along its orbit, events unwind in reverse order. The Moon’s leading edge re-emerges into sunlight, ending totality and beginning stage four: when the eclipse is once again partial.

After all of the Moon escapes the umbra, only the last, penumbral shading is left for stage five. This final duskiness gradually fades away for the next 40 minutes or so, finally leaving the full Moon shining as bright and white as if nothing had happened. 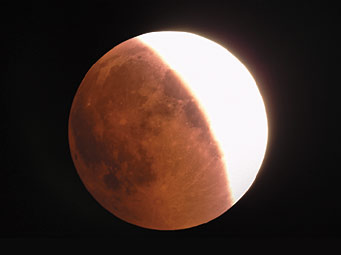 Yep, Earth is round, as you can see by the shape of its shadow edge. Earth is also a good deal bigger than the Moon, as the ancient Greeks worked out fairly accurately by measuring the shadow edge's curvature.

Red Light in the Dark

The umbra is the part of Earth’s shadow where the Sun is blocked completely. So why does the eclipsed Moon glow deep orange or red, rather than being blacked out?

The answer is amazing.

The red light you'll see on the Moon comes from all the sunrises and sunsets that are occurring around Earth at the time. Our atmosphere scatters and refracts (bends) the sunlight that grazes the rim of our globe, sending some of it into Earth’s shadow.

If you were an astronaut standing on the Moon, the situation would be obvious. You would see the Sun covered up by a dark Earth that was ringed all around with a thin, brilliant band of sunset- and sunrise-colored light.

Watch the Moon carefully for other colors during totality, especially through binoculars or a telescope. Sometimes delicate blues, greens, and purples come and go. Time-lapse photography may show “flying shadows” crossing the Moon’s face during totality. These result from different features along Earth’s sunrise-sunset ring fading and brightening as the Sun shifts position behind Earth.

For this eclipse the Moon will be in the midst of some fine celestial scenery, like a big cameo stone with shiny little gems on the sides. The Moon will form a changing triangle with bright Saturn and the slightly dimmer star Regulus. (Their exact arrangement will depend on the time and where you're looking from.) The whole scene will just fit in the field of view of most binoculars.

After three total lunar eclipses in less than a year, we face a dry spell. Partial ones occur for Europe, Africa, and parts of Asia on August 16, 2008, and December 31, 2009. The Americas get a partial one on the morning of June 26, 2010. But not until the night of December 20–21, 2010, does the next total lunar eclipse happen. That night the Americas will once again be favored. 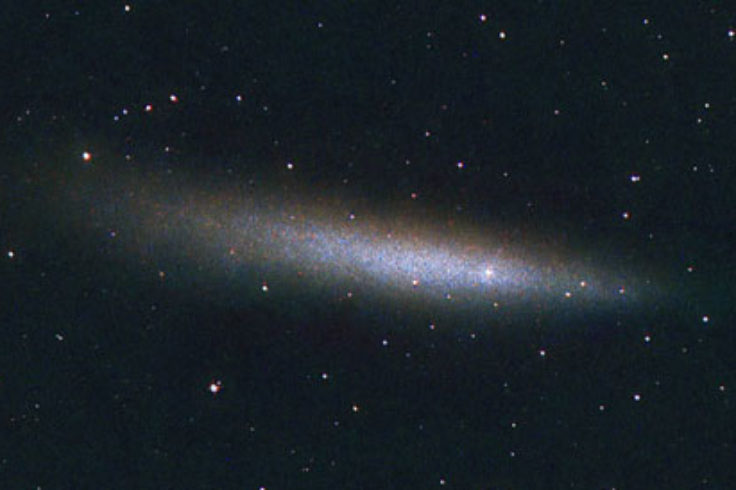 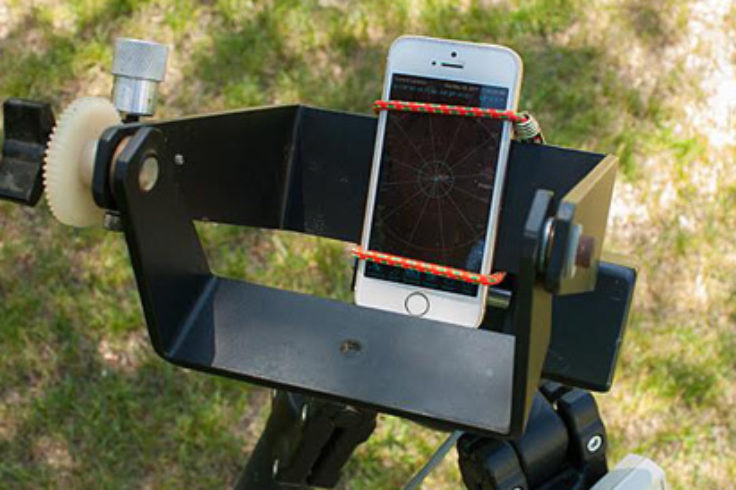