One of the most dramatic sights in the nighttime sky occurs when the Moon briefly hides a planet or star — an event called an occultation. On April 25th and 26th, many observers in northwestern North America will be treated to an unusual occultation double-header as the Moon conceals Saturn on one morning and Regulus the next. Both events should be visible without optical aid if the sky conditions are good, though the view will be better through binoculars or a telescope. Elsewhere in North America, observers will still be in for a fine sight as the Moon hovers just to the right of Saturn and Regulus after sunset on the evenings of the 24th and 25th respectively.

On Wednesday morning, April 25th, most of us will see the Moon make a close encounter with the ringed planet. But lucky stargazers in Alaska, far-western Canada, and maybe the northwest tip of the United States can watch the dark limb of the 8-day-old Moon sweep across the rings and body of Saturn. The ringed world's disappearance will be dramatic as the lunar limb slices sideways across the planet and its rings. The occultation starts between 10:00 and 10:30 Universal Time (2:00-2:30 a.m. Alaska Daylight Time, 3:00-3:30 Pacific Daylight Time), and it takes about a minute for the planet to be covered completely. The disappearance is theoretically visible as far south as Washington State, but it takes place just a few minutes before the Moon sets there, making it difficult to observe.

Saturn's largest moon, Titan, is visible in a small telescope and will appear as a faint star just above the planet's south pole. Titan vanishes first, slightly less than a minute before Saturn begins to disappear.

About 45 minutes later Saturn starts to reappear from behind the southeastern quadrant of the bright edge of the Moon. The planet's rings will be almost impossible to spot as they emerge against the glare of the lunar limb, so the planet itself will likely be the first thing many observers notice as the reappearance unfolds. Stargazers using telescopes should watch for Titan to pop out above Saturn just as the last of the planet's rings is uncovered.

To find out when Regulus is occulted at your site, interpolate between the yellow time lines on the map. They are labeled in Universal Time. As necessary, subtract 7 hours to get Pacific Daylight Time or 6 hours to get Mountain Daylight Time. For observers everywhere except in the northwestern corner of this map, the Moon will have set by the time Regulus reappears.

When a star slips behind the Moon it's one of the fastest events in the sky visible to amateur astronomers. After creeping ever closer to the lunar limb, the star appears to briefly hang beside the edge of the Moon and then abruptly snaps out of sight. By comparison, the occultation of a planet is a downright leisurely affair.

During the morning hours of April 26th, the dark limb of the 71% sunlit Moon blots out Regulus for viewers throughout much of the western United States and Canada. The occultation occurs between 09:00 and 10:00 UT; see the map at right to determine when the star vanishes for your viewing area.

Roughly an hour later, Regulus emerges from behind the opposite limb. The star will blink into view instantaneously, so if you're not watching the lunar edge at just the right moment, you'll miss its reappearance. However, for most viewers the Moon sets before Regulus pops into sight; only observers in Alaska, Yukon, and northwestern British Columbia have a chance at catching the conclusion of this occultation. The reappearance may be hard to see anyway, since Regulus emerges from behind the bright lunar limb.

If you capture any images of either occultation, please send them our way. And while you're out there, don't forget to look for Comet Lovejoy. 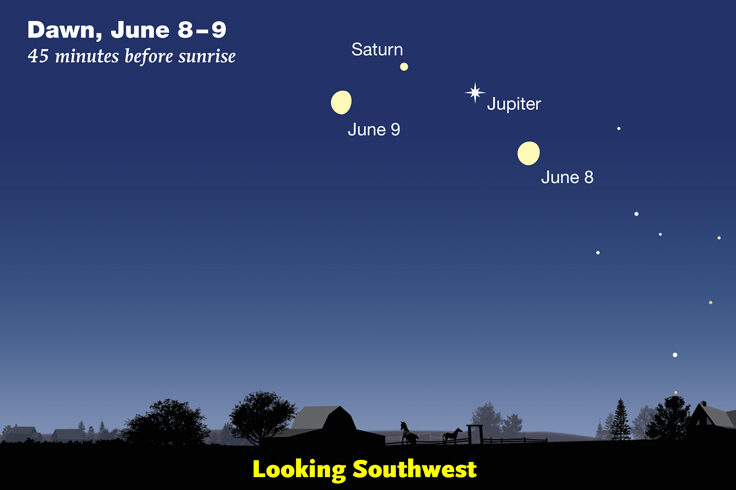