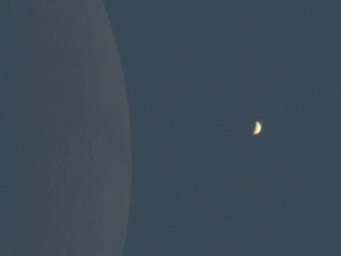 The view from Gliwice, Poland, minutes after the main event.

Monday morning's occultation of Venus behind the Moon was a beautiful sight for those lucky enough see the event.

Although residents from the Middle East to Europe had the best situations with the event taking place high in the sky, North Americans living in the northeast were able to catch at least the reemergence of the the planet at roughly 9:45 EDT, give or take a few minutes depending on where you were.

Observing from the shores of St. Froid Lake in northern Maine, Dave Dickinson was able to witness the entire event. He noted that Venus vanished over the span of 10 seconds shortly before 9:05 EDT. Although the Moon was about 6° above the horizon at the time, it was invisible to the naked eye.

Conditions were less favorable in Massachusetts, as Joe Monju of Arlington describes: "Despite a cleansing rain storm on Sunday night June 17, 2007, the horizon was still too hazy to see any faint objects below 10°. I finally found the Moon about 10 minutes before Venus reappeared, and watched the final stages at about 9:45 AM EDT through my 11×80 Swift binoculars."

A group of editors here headed across the street to the highest point in Danehy Park in Cambridge, MA, where we had no luck finding the Moon before first contact. About 5 minutes before Venus slipped out from behind the Moon, senior editor Dennis di Cicco managed to spot the Moon through the haze with 9×63 binoculars. I managed to find it also by standing over Dennis and copying him as he shouted "here it comes!", and we were able to observe the final moments of the event.

My visual impression was that of a glittering diamond emerging from the southern limb of the faint crescent Moon. Quite a sight to behold! If you missed the event, have a look at our readers images.