Note to Editors/Producers: This release is accompanied by a high-quality animation and two illustrations; see below.

On Monday morning, December 22nd, at 2:04 a.m. Eastern Standard Time, the Sun will reach its southernmost point in the sky for 2003 and begin its six-month return journey northward. This moment marks the December solstice, the official beginning of winter in the Northern Hemisphere and a time of great celebration in many northern cultures. (Note that in the western US the solstice occurs on Sunday night, December 21st, at 11:04 p.m. Pacific Standard Time.)

The word solstice comes from the Latin solstitium — sol meaning "sun" and -stitium "stoppage." The winter solstice marks the shortest day and longest night of the year. It is also the time when the days begin to grow longer and the nights shorter. In ancient cultures, the winter solstice was an auspicious moment. It meant the end of declining hours of sunlight and provided a sense of renewal as the Sun began its daily climb higher in the sky.

Winter-solstice celebrations could well be the world's oldest holidays. There are more known rituals associated with this solstice than for any other time of the year. Prior to the Christian era, Romans called this day Dies Natalis Invicti Solis, the Birthday of the Unconquered Sun. Earlier in Rome it was the time of Saturnalia, the Roman solstice holiday. In 46 BC the winter solstice fell around December 25th. Despite calendar reforms, these celebrations and the observance of Christmas by early Christians remained locked to the 25th.

Christmas Day 2003 brings a special astronomical treat. Two of the most beautiful sights in the sky will be visible side by side low in the southwest at dusk: Venus and a two-day old Moon. Catch them early before they set, and as the sky grows darker don't forget to look for the "old Moon in the new Moon's arms," where the Moon's entire face is visible — part of it as a brilliant thin crescent lit directly by the Sun, and the rest lit faintly by light reflected from the Earth. If you were standing on the Moon at this time, you would see a nearly-full Earth overhead, 50 times brighter than the full Moon as seen from Earth!

Sky & Telescope is making the following graphics available to the news media. Permission is granted for one-time, nonexclusive use in print and broadcast media, as long as appropriate credits (as noted in each caption) are included. Web publication must include a link to SkyandTelescope.com. 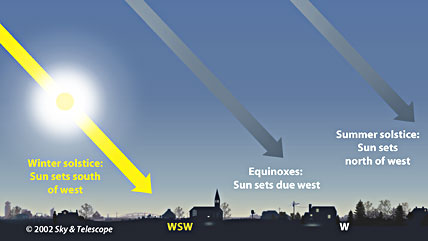 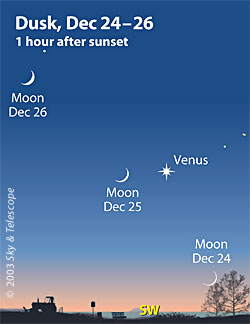 The waning crescent Moon points the way to Venus gleaming in the southwest at dusk on Christmas Day 2003. Click on the image above to download a publication-quality version (237-kilobyte JPEG) by anonymous FTP.