On Wednesday, March 29, 2006, a total eclipse of the Sun will sweep across parts of West and North Africa, Turkey, and Central Asia. The eclipse will be partial across a much wider region, including most of Africa, all of Europe, and much of western and southern Asia.

The accompanying maps provided by Sky & Telescope magazine tell the story. They will help skywatchers in those regions of the world to plan their activities for the big day.

A solar eclipse happens when the Moon crosses the face of the Sun as seen from your viewpoint on Earth. The globe map shows the entire region of Earth that will be touched by any part of this eclipse, including the complete path of totality: where the Sun will become completely covered by the Moon. As the map shows, the total eclipse starts at sunrise at the tip of Brazil, crosses the Atlantic in the morning, the Sahara Desert at midday, Turkey in the afternoon, and ends at sunset in Central Asia. Red lines on the globe map indicate how much of the Sun's diameter is covered at maximum partial eclipse. Purple lines tell when this happens, in Universal Time (UT; also called Greenwich Mean Time or GMT).

The close-up map of Europe and the Middle East gives more detail. Here, blue and red lines tell the start and end times of partial eclipse, respectively, again in UT/GMT. The partial eclipse for any site is at its maximum halfway between these times. The black lines on the map tell the percentage of the Sun's diameter that will be covered at maximum eclipse.

What To Look For

Although a partial solar eclipse can't hold a candle to a total one, it's a memorable celestial event in its own right. Can you see a change in the illumination of the landscape around you? A partial eclipse has to be surprisingly deep to alter the light visibly, because our eyes are very good at adjusting to ambient light levels. But when this does happen, the world seems to take on an odd, silvery feel like no other. Look for crescent-shaped dapplings on the ground where sunlight shines through leaves. In a safely solar-filtered telescope (see below), look for mountain silhouettes on the Moon's dark edge. Look too for a difference between the Moon's complete darkness and the not-so-complete darkness of any sunspots that the edge of the Moon approaches.

Warning: Never look at the bright surface of the Sun without proper eye protection! Examples are special "eclipse glasses" properly designed for the purpose, a #14 rectangular arc-welder's filter, or special astronomers' solar filters (see our list of solar filter suppliers). Staring at the bright Sun can burn your retina, leaving a permanent blind spot in the center of your vision. The only reason a partial eclipse poses a special danger is because it can prompt people to look directly at the Sun, something they wouldn't normally do. See our complete descriptions of the various ways to watch safely, including the "projection method" using a pinhole, binoculars, or a telescope.

Looking while the Sun is totally eclipsed, on the other hand, is safe. At that time, of course, none of the Sun's bright surface is in view.

More on this particular eclipse appears in the January and March 2006 issues of Sky & Telescope, the Essential Magazine of Astronomy.

For detailed local predictions at any given location, please see NASA's Web site for this eclipse. 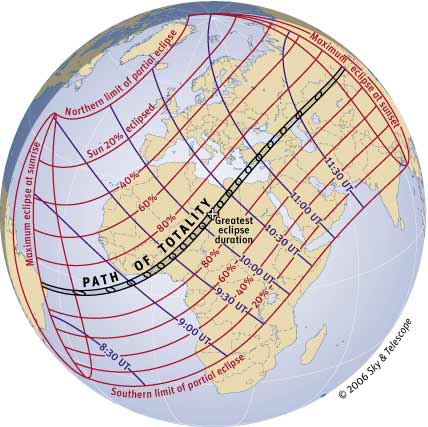 This orthographic-projection map of Earth shows the path of the umbral shadow for the March 29, 2006, total solar eclipse. Partial phases of the eclipse can be seen over a much broader region, including most of Africa and Asia as well as all of Europe and the Middle East. Click on the image to download a publication-quality version (920-kilobyte JPEG) by anonymous FTP.

Although nothing of the March 29, 2006, solar eclipse can be seen from North America, all Europeans can observe the partial phases — weather permitting. Use this map to find when the eclipse begins and ends at your location; times are GMT. The curves labeled with percentages indicate what fraction of the Sun's diameter is blocked by the Moon at maximum eclipse. Click on the image to download a publication-quality version (982-kilobyte JPEG) by anonymous FTP.

These views show the Sun's appearance at the times of greatest eclipse on March 29, 2006, for various cities, as seen by an observer who stands facing the Sun and looks through a safe solar filter. Click on the image to download a publication-quality version (237-kilobyte JPEG) by anonymous FTP. 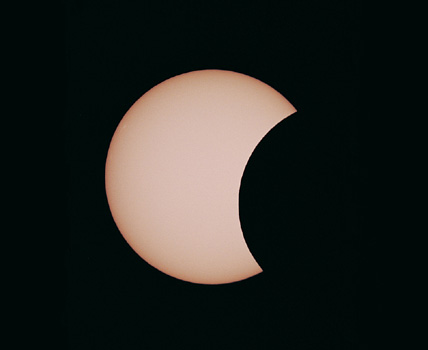 A partial eclipse of the Sun was widely visible across the United States on May 10, 1994. This view of the event was captured from Ogunquit, Maine. Click on the image to download a publication-quality version (500-kilobyte JPEG) by anonymous FTP.

Sky Publishing was founded in 1941 by Charles A. Federer Jr. and Helen Spence Federer, the original editors of Sky & Telescope magazine. The company's headquarters are in Cambridge, Massachusetts, near the Harvard-Smithsonian Center for Astrophysics. In addition to Sky & Telescope and SkyandTelescope.com, the company publishes Night Sky magazine (a bimonthly for beginners with a Web site at NightSkyMag.com), two annuals (Beautiful Universe and SkyWatch), as well as books, star atlases, posters, prints, globes, and other fine astronomy products.