Note to Editors/Producers: This release is accompanied by four publication-quality illustrations; see details below.

Amateur astronomers throughout the Northern Hemisphere have marked Thursday, April 4th, on their calendars. That evening, weather permitting, they'll be looking low in the northwest after sunset to spot a bright comet very near the famous Andromeda Galaxy. The comet, which was discovered on February 1st, is named Ikeya-Zhang [pronounced "ee-KAY-uh JONG--> for the two keen-eyed skygazers who first spotted it.

Remarkably, both the comet and the galaxy are visible to the unaided eye — at least for anyone with clear, dark skies far from the pall of city lights. The view through binoculars or a small telescope should be especially rewarding, as these two celestial spectacles crowd into the same field of view. According to Sky & Telescope magazine, on that evening the comet passes within 1½° of the galaxy's center. Comet Ikeya-Zhang will then be 82 million kilometers (51 million miles) from Earth, while the Andromeda Galaxy lies 300 billion times farther away (2.5 million light-years).

Even though it passed closest to the Sun on March 18th, Comet Ikeya-Zhang has remained steady in brightness for the past two weeks, delighting skywatchers with its starlike nucleus and delicate, wispy tail. "Based on its track record thus far," notes Sky & Telescope senior editor Roger W. Sinnott, "Comet Ikeya-Zhang stands to be the best comet for northern skygazers since 1997," when Comet Hale-Bopp put on a command performance. (However, Ikeya-Zhang will not get as bright as Hale-Bopp did.)

Comet Ikeya-Zhang will be nearest to Earth, 60 million km (38 million miles) away, on April 29th. It remains visible to observers in the Northern Hemisphere throughout this period, though it won't become well separated from the Sun until mid-April, when it is best seen before dawn. In late April the comet glides to within 29° of Polaris, the North Star, and remains above the horizon all night for most of the United States and all of Canada and Europe.

Credit for the discovery goes to Kaoru Ikeya (Mori, Shizuoka prefecture, Japan) and Daqing Zhang (Kaifeng, Henan province, China), who spotted the comet on February 1st using their backyard telescopes. Within days of the discovery, astronomers noticed similarities between the orbital path of Ikeya-Zhang (known formally as C/2002 C1) and that of other comets observed in 1532 and 1661. Calculations now strongly suggest this is the object seen in 1661, which is making its first return visit to the inner solar system in 341 years. No other comet with such a long period has been witnessed on successive orbits around the Sun. (Halley's Comet, by comparison, comes our way every 76 years or so.)

For more information about the discovery and appearance of Comet Ikeya-Zhang, including a table of of celestial coordinates for the coming weeks, see the this story in our Observing section. 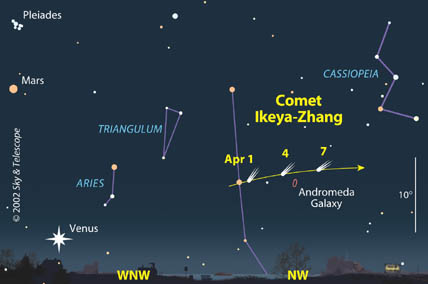 The path of Comet Ikeya-Zhang during early April. Now receding from the Sun, the comet is gradually sliding northward in the sky. On the evening of April 4th it passes within 1½° of the great Andromeda Galaxy. By mid-April it will be near enough to Polaris, the North Star, that observers at mid-northern latitudes will be able to view it virtually all night. The chart is plotted for an observer at 40° north latitude. 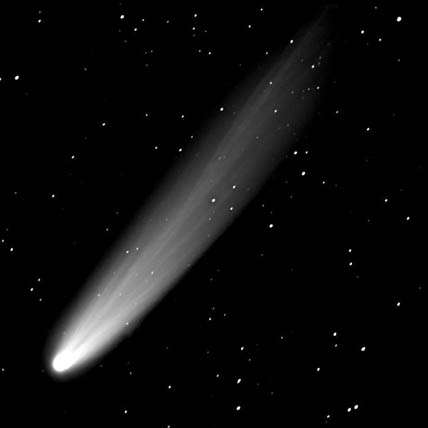 Comet Ikeya-Zhang as it appeared on March 21, 2002. Observing west of Tucson, Arizona, Andrew Cooper recorded the comet with a 10-inch Meade Schmidt-Cassegrain telescope and a digital (CCD) camera. He combined a series of ten 1-minute exposures to get this composite image. © 2002 Andrew Cooper, courtesy Sky & Telescope.

If used in Web coverage, the caption/credit must contain a link to the photographer's home page: http://aecooper.home.att.net/SiOwl.html. If used in print media, please send a tearsheet to: Andrew Cooper, 2520 N. Sycamore Blvd., Tucson, AZ 85712. 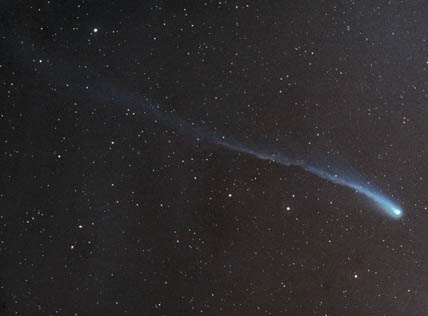 Gerald Rhemann of Vienna, Austria, recorded Comet Ikeya-Zhang on the evening of March 3rd with a 7.5-inch (190-mm) f/2.3 Schmidt camera. In this two-image composite, the comet displays a wispy tail roughly 4° long. The blue color is due to gas ionized by sunlight after being released from the icy nucleus (far right). North is up. 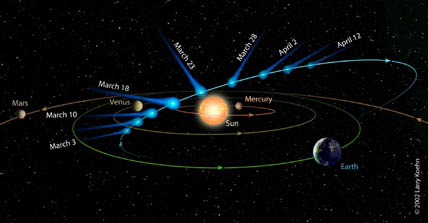 Comet Ikeya-Zhang (C/2002 C1) has a very long, narrow orbit that stretches well beyond the orbit of Pluto. Its last sweep through the inner solar system occurred in 1661. This time around, the comet passes between the Sun and Earth, with its closest approach to the Sun on March 18th.