Celestial Anniversary of the Sinking of the USS Indianapolis

On July 29, 1945, during the final days of World War II, a Japanese submarine torpedoed the USS Indianapolis in the Philippine Sea. Although some 900 of the nearly 1,200 sailors escaped the ship, only 317 survived the next four days of exposure and shark attacks. The circumstances of the tragedy began with a binocular sighting of the heavy cruiser silhouetted in moonlight. According to Sky & Telescope magazine, the celestial scene will repeat exactly on July 29, 2002, the 57th anniversary of the disaster.

Tragic though the sinking was for the ship’s crew and their families, it would have profoundly altered the course of world history had it come one week earlier. For the USS Indianapolis was the ship that delivered components of the first atomic bomb to Tinian Island for the eventual bombing run on Hiroshima. 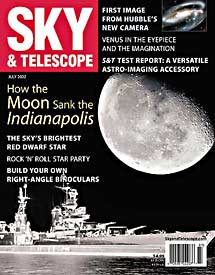 "Ill Met By Moonlight: The Sinking of the USS Indianapolis" considers the role of the Moon on the ship's fateful night. The article by Donald W. Olson, Brandon R. Johns, and Russell L. Doescher (Southwest Texas State University, San Marcos) appears in Sky & Telescope's July issue. The authors used the coordinates of the ship and the submarine, the time of their encounter, astronomical computations, and weather reports to conclude that a rising three-quarters-lit Moon aided in the sinking. Following the glitter path of light from the Moon, which peeked in and out of a broken overcast, the Japanese submariners could see the cruiser's silhouette on the eastern horizon from more than 10 miles away. If not for the Moon, the ship would have passed by unnoticed. "Visibility was good only looking east," Olson says. "Once the Moon rose behind the Indianapolis, due east of the sub, the ship was doomed."

At the position of the sinking, the Moon rose at 10:30 p.m. local time (9.5 hours ahead of Greenwich Mean Time). By 11:35 p.m. the waning gibbous Moon, 75 percent illuminated, was standing 15 degrees above the eastern horizon, at azimuth 96 degrees (a little south of due east). This scene will repeat itself over the Philippine Sea on July 29, 2002. North American observers, though on the wrong side of the International Date Line and too far north of the equator, can nevertheless see less exact recreations of the lunar phase and position about 90 minutes after moonrise on the night of July 28-29 or July 29-30. Those near a body of water may gain a better appreciation for how the Indianapolis was doomed from the moment the Moon came out from behind the clouds.