Note to Editors/Producers: This release is being simultaneously issued by Sky & Telescope and Texas State University. Digital images suitable for print publication are available; see details below.

Edvard Munch (1863–1944) is best known today for his iconic painting The Scream, but a century ago the Norwegian artist's fame was firmly tied to his idyllic masterwork Girls on the Pier. 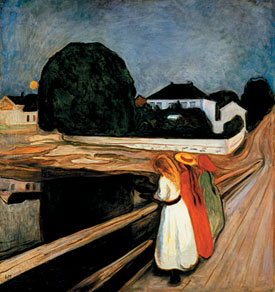 Girls on the Pier by Edvard Munch.

Despite its beloved status, two elements of the painting have puzzled admirers over the years: The yellow orb that Munch placed in the sky — which different authorities have conflictingly identified as the Sun and the Moon — and the mysterious absence of this orb from a mirror image of the scene reflected in the waters of the still Norwegian fjord.

Through a combination of forensic astronomy and old-fashioned historical research, Texas State professors Don Olson and Russell Doescher, along with undergraduate Beatrice Robertson, have conclusively identified the disk as the setting Moon. Additionally, the researchers hit upon a simple physical explanation accounting for the Moon's odd absence from the reflection below. The team's complete findings are published in the May 2006 issue of Sky & Telescope magazine.

Munch created at least 20 variations of the scene from Girls on the Pier, of which the version in the National Gallery in Oslo, Norway, is believed to be the first and dated to either 1899 or 1901. To test their theories, the Texas State researchers traveled to Åsgårdstrand, a summer resort in Norway where Munch lived and painted during this time. There, on the shore of the fjord, they found the distinctive houses, fence, and trees from Munch's painting almost exactly as depicted more than a century ago. A significant difference the team discovered was that a modern stone pier is now located approximately 18 feet south of where the original wooden pier stood in Munch's time.

"Åsgårdstrand is well south of the Arctic Circle, so we knew that the yellow disk couldn't be the Midnight Sun," said Olson, who previously applied his astronomical sleuthing skills to connect the blood-red sky in The Scream to volcanic twilights following the great 1883 eruption of Krakatoa. "At Åsgårdstrand, near the summer solstice, they have what are called 'light nights,' and what that means is that there's a midnight twilight — it just doesn't get dark."

The light summer nights meant that the yellow object could be either the Sun or the Moon while still allowing for the bright colors and details of Munch's painting. After determining Munch's vantage point using old photographs of the harbor and topographic calculations, the researchers set about establishing the paths of the Sun and Moon across the Norwegian summer sky. The results were clear.

"The summer sunset would be way over to the north of the pier — far to the artist's right, whereas summer full Moons would run low in the sky and set exactly where he shows it," Olson said. "That tells us that the yellow disk must be the full Moon."

After the field work in Åsgårdstrand, the team tracked down several obscure letters written in 1902 by Munch calling the painting Summer Night, further evidence supporting the Texas State researchers' conclusion that the painting is a nighttime scene, and that the disk is indeed the Moon.

With the yellow disk in the painting firmly established as the Moon, the researchers turned their attention to the second, more perplexing question: Why isn't it reflected in the water?

Over the years, various scholars have explained the absent reflection as artistic license, symbolic of failing memory, or key to the scene's emotional balance. Olson turned to a book by the late Marcel Minnaert, a pioneer in the field of atmospheric optics. In Minnaert's book he found not only an explanation for the phenomenon, but also a diagram that matched the circumstances of Munch's painting with startling accuracy.

"When we saw the diagram of the same phenomenon that's depicted in Munch's painting, it was almost eerie," Olson recalled. "The key point is that your eye is approximately 11 feet above the water level — the reflective surface. Light can come directly from the Moon to the observer, whose eye is above the pier, but the light that tries to come from the Moon to reflect off the water is blocked by the house.

"This is entirely caused by the fact the observer's eye is above the water level. If you could put your eye right at the water level, you'd see the same thing above and below. But you're offset, and this causes an asymmetry," he said. "We're not the first people to discover this phenomenon of optics — it's well known. But we are the first people to apply it to Munch's painting. It's a physical explanation for the missing reflection, not a psychological or symbolic one."

The team's calculations explain several subtle changes in perspective of the roof line and chimney of the house reflected in the fjord as well, Olson said, leaving the researchers impressed by the artist's accuracy and detail in depicting the northern summer night and the reflection in the water.

Girls on the Pier is currently on display at the New York Museum of Modern Art through May 8th as part of "Edvard Munch: The Modern Life of the Soul," the first major U.S. retrospective of Munch in 30 years. Another version of the painting, sometimes called Girls on the Bridge, is part of the permanent collection of the Kimbell Art Museum in Fort Worth, Texas.

Editors/Producers: Upon request from accredited media representatives, Sky & Telescope or Texas State University will e-mail an Adobe PDF file of the May 2006 S&T article by Olson, Doescher, and Robertson. Please contact Kerri Williams at 855-638-5388 x127 or [email protected], or Jayme Blaschke, TSU Media Relations and Publications, at 512-245-2180 or [email protected]. Publication-quality digital files of most of the images in the PDF — but not Girls on the Pier by Edvard Munch — are available from the same sources. If you end up using any of these images in your own story, they must be credited as they are in the S&T article.

Girls on the Pier itself may not be reproduced without permission from the copyright holder. To obtain permission and a publication-quality digital file, please contact Caitlin Miller at the Artists Rights Society, [email protected].