Note to Editors/Producers: This release is accompanied by publication-quality graphics and broadcast-quality animations; see details below.

The two brightest planets — which far outshine the brightest stars — are putting on a grand show in the dawn sky. Venus and Jupiter shine close together in the east before daybreak, creating a head-turning sight. And right now they're inching closer together every morning. Moreover, the crescent Moon will soon join the show.

Daybreak comes late at this time of year, so lots of people are up and starting their day while the sky is still fairly dark and the celestial objects are on parade. Here's what's happening on the coming mornings, according to the editors of Sky & Telescope:

November 4 and 5: Venus and Jupiter appear their closest together, being separated by only about the width of a pencil seen at arm's length. Venus is the brighter of the two. Although they certainly look close together, they're actually not; Venus is currently 118 million miles away from us, while Jupiter is almost five times as distant at 580 million miles.

November 6, 7, and 8: Venus and Jupiter now pull a little farther apart each morning, while still remaining a very unusual spectacle. Meanwhile, the waning crescent Moon closes in toward them morning by morning, shining high to their upper right.

November 9 and 10: The crescent Moon appears poised near the widening Venus-Jupiter pair.

November 11 and afterward: Jupiter and Venus continue to move farther apart each day.

Meanwhile, all this time a third planet awaits viewing far down below them. Little Mars is much dimmer and may be hard to pick out of the skyglow, but take a look for it. Also in Mars's vicinity is the star Spica. Binoculars will give a beautiful view of everything and will help in particular for spotting Mars and Spica.

Weak meteor shower due. Later in November comes the annual Leonid meteor shower. It should peak before the first light of dawn on Wednesday morning, November 17th. But this year's display will probably be quite sparse. We're well past the 1999–2002 period, when skywatchers in some parts of the world saw Leonids streaking across the sky as often as once every second or two. The shower's parent comet, Comet Tempel-Tuttle, is long gone from its 1998 return through our part of the solar system, and so are the densest streams of meteoroids traveling in its path. The bottom line: this year, skywatchers with ideal dark-sky conditions might see 15 or 20 Leonids per hour on the morning of maximum. Any light pollution in the sky will reduce these numbers.

Sky & Telescope is pleased to make the following publication-quality graphics and broadcast-quality animations available to the news media. Permission is granted for one-time, nonexclusive use in print and broadcast media, as long as appropriate credit (as noted in each caption) is included. Web publication must include a link to SkyandTelescope.com. 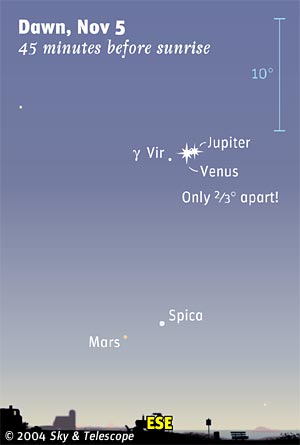 The planets Venus and Jupiter appear very close together in the east-southeast before dawn on November 5, 2004. They're separated by only about the width of a pencil seen at arm's length. Venus is the brighter of the two. Although they certainly look close together, they're actually not; Venus is currently 118 million miles away from us, while Jupiter is almost five times as distant at 580 million miles. Click on the image to download a high-resolution, 62-kilobyte JPEG. 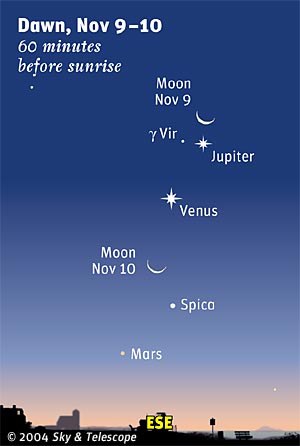 Watch the waning crescent Moon pass brilliant Jupiter and Venus (and fainter Mars) in the eastern sky at dawn in early November 2004. For clarity, the Moon is shown four times larger than its true angular size in the sky. (These scenes are drawn for the middle of North America; European observers should move each Moon symbol a quarter of the way toward the one for the previous date.) Click on the image to download a high-resolution, 96-kilobyte JPEG. 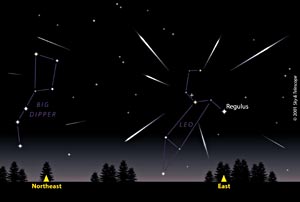 The cometary crumbs that create Leonid meteors are traveling together through space along the orbit of Comet Tempel-Tuttle. So even though they can appear anywhere in the sky, they all seem to emanate from a spot in the constellation Leo. But in mid-November this constellation does not rise above the horizon until after midnight (this view is for 1 a.m. local time), so large numbers of meteors will not be seen until Leo rises. Click on the image to download a publication-quality version (102-kilobyte JPEG) by anonymous FTP. 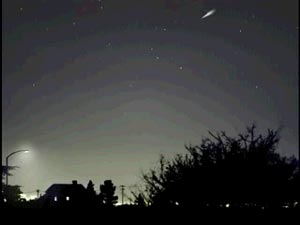 This is a reduced-size still frame from a simulation of a rich Leonid meteor shower as seen in a light-polluted night sky, for example, in a heavily populated area. Only a few bright meteors show through; the faint ones are hidden by skyglow. The animation illustrates how all members of the shower appear to radiate from the same direction in the sky (in the constellation Leo). Click on the image to download the broadcast-quality animation (107-megabyte QuickTime movie) by anonymous FTP.

These are reduced-size frames from Sky & Telescope's broadcast-quality QuickTime animation showing how a meteor is formed when a speck of cometary debris burns up in Earth's upper atmosphere. Download the full animation by FTP (17 megabytes).