Note to Editors/Producers: For more information, please direct your readers/viewers to our online general-interest story. This release is accompanied by a high-quality illustration; see end of release.

"What's that!?" Billions of people will be asking this question over
the next few days when they look southwest after the Sun sets and
evening twilight deepens.

What they’ll be seeing is a close pairing of the two brightest planets, Venus and Jupiter. On November 30th and December 1st they’ll be separated by only about the width of your finger held at arm’s length.

And on the evening of December 1st, skywatchers in the Americas will see the crescent Moon joining the two planets to make a remarkably compact celestial triangle. It’s sure to turn heads.

Although the three objects look close together, the appearance is deceiving. The Moon is only 252,000 miles away, less far than you may have driven a car in your lifetime. Right now Venus is 370 times farther away, at 94 million miles. And Jupiter, at 540 million miles, is nearly six times farther than Venus.

To put it another way: the Moon is currently 1.4 light-seconds distant, Venus is 8.4 light-minutes distant, and Jupiter is 42 light-minutes away. That’s how long the light from each of them has been traveling through space before it hits your eye.

Moreover, although Jupiter looks like a tiny dot, it’s actually 40 times wider than the Moon.

If the sky is cloudy for this event, don't despair. Venus and the crescent Moon will have another spectacular twilight pairing (though without Jupiter) on December 31st, New Year's Eve!

• This marks the second time this year that Venus and Jupiter have mimicked a brilliant "double star" in our sky. Back on February 1st, they appeared together in the eastern sky before dawn. At that time they nestled even closer together — only ½° apart.

• The last time these two planets were paired in the evening sky and easily seen was September 2005, when they appeared about 1½° apart. They won't be this close together and well placed for evening viewing again until May 2013 (1° apart).

• If Jupiter is the biggest planet, why does it look dimmer than Venus? Two reasons. First, Venus is much closer to Earth. Second, Venus is about seven times closer to the Sun than Jupiter is, so it gets illuminated by sunlight that’s about 49 times as intense. This is plain to see if you turn a telescope onto the two planets. Both are covered with mostly white clouds, but Venus is a dazzling blaze while Jupiter has a much more subdued appearance.

• One of the leading astronomical explanations for the Biblical "Star of Bethlehem" is a spectacularly close pairing of Venus and Jupiter that occurred in 2 B.C. (on June 17th). However, by that date King Herod had died, thus contradicting the account of Christ's birth in the Gospel according to Matthew.

Sky & Telescope is making the following illustration available to editors and producers. Permission is granted for one-time, nonexclusive use in print and broadcast media, as long as appropriate credits (as noted in each caption) are included. Web publication must include a link to SkyandTelescope.com. 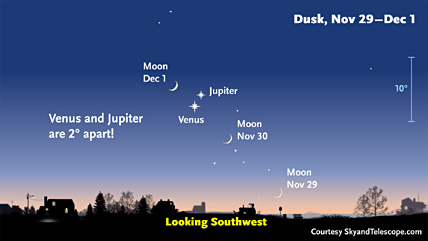 This illustration shows Venus, Jupiter, and the Moon's position for three days in late 2008. It's plotted for observers in the middle of North America (and the alignment of the Venus-Jupiter pairing is exact for November 30th), but it”™s close enough to give a good idea of how the scene will look from anywhere in North America. High-resolution versions (with HD aspect ratio) are available with and without labels.