As lunar eclipses go, it won't be much. On Monday, October 17, 2005, the edge of the Moon will barely skim through Earth's shadow. Even at mid-eclipse, only 7 percent of the Moon's diameter will graze through the north-northwestern edge of the Earth's umbra (the shadow's dark central portion).

But an eclipse is an eclipse, and if you're correctly placed, you can add this one to your life list.

Western North America and Hawaii get a view of this event before dawn. Maximum eclipse comes at 12:03 Universal Time, which is 5:03 a.m. Pacific Daylight Time and 6:03 a.m. Mountain Daylight Time. For skywatchers farther east, the Moon will be getting quite low in the west and dawn will be growing bright. In the Central time zone you might catch the eclipse's early portion.

The first hint of the oncoming event may be visible as much as 1 hour and 20 minutes before mid-eclipse time. Look for a very weak shading across the Moon's left side; this is the pale outer fringe of Earth's shadow (the shadow's penumbra). The penumbral shading will get stronger for the next 50 minutes.

At that point, 29 minutes before mid-eclipse, the Moon's edge will begin to intrude into the dark umbra for the start of partial eclipse. Nearly an hour later partial eclipse ends, and the show is pretty much over.

The eclipse is also visible in Australia, New Zealand, and throughout the western Pacific Rim, during evening hours on the 17th local date.

Sky & Telescope is pleased to make the following publication-quality graphics available to the news media. Permission is granted for one-time, nonexclusive use in print and broadcast media, as long as appropriate credits (as noted in the caption) are included. Web publication must include a link to SkyandTelescope.com. 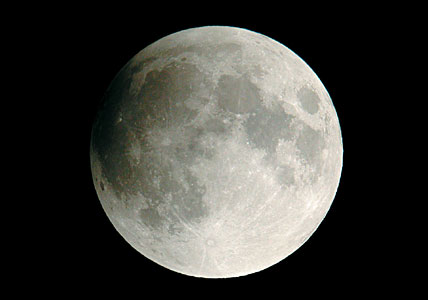 The Moon looks here about as it will at the middle of its weak little eclipse on October 17, 2005. Although the umbra covers only a bit of the Moon's edge, the pale penumbra washes over a wider area. Sky & Telescope associate editor Gary Seronik shot this photo during the eclipse of November 8, 2003. Click on the image to download a publication-quality version (500-kilobyte JPEG) by anonymous FTP. 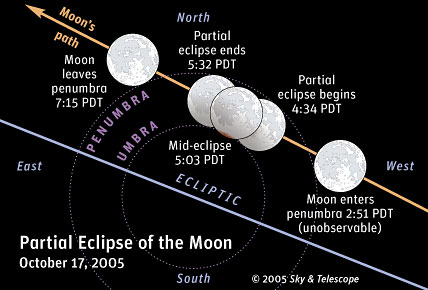 The dark umbra of Earth's shadow barely nicks the full Moon's south-southeastern edge before dawn on October 17, 2005, for western North America. Be sure to set your alarm clock on the night of the 16th. Click on the image to download a publication-quality version (254-kilobyte JPEG) by anonymous FTP.