In the afterglow of fireworks celebrating the New Year, on January 4th millions of people throughout Europe, Africa, and Asia will again look skyward — this time to watch a dramatic partial eclipse of the Sun. Depending on your location, the Moon will slowly cover and then uncover up to 80% of the Sun's disk over a 3-hour period.

For many cities in western Europe and Africa, the event will already be under way at sunrise, offering an especially good opportunity to photograph interesting foregrounds with the partially eclipsed Sun low in the background sky. Local times for selected cities and the Sun's maximum area covered appear in the table below (for other cities, click here); times after noon are shown in bold:

Unlike a total solar eclipse, which is observable only from a narrow track somewhere across Earth's surface, a partial solar eclipse can be viewed from a wide geographic area. The closer you are to the point of greatest eclipse — in northern Sweden for January 4th's event — the deeper the Moon's "bite" in the Sun's disk will become. Europeans won't get another opportunity to see the Sun covered to this extent until March 20, 2015.

Anyone watching the solar eclipse should do so very carefully. "Looking directly at the Sun is harmful to your eyes at any time, partial eclipse or no," explains Alan MacRobert of Sky & Telescope magazine. "The only reason a partial eclipse is dangerous is that it prompts people to gaze at the Sun, something they wouldn't normally do. The result can be temporary or permanent blurred vision or blind spots at the center of your view."

Fortunately, there are many easy ways to watch the show safely. You can look at the Sun directly through glasses equipped with special solar filters, or through a dark #13 or #14 rectangular arc-welder's glass. (Sunglasses, no matter how dark, are not safe for solar viewing.) Another easy method is create a pinhole projector, created by poking a small hole in a card, facing it toward the Sun, and holding a second card about 1 meter behind it in its shadow. Sky & Telescope provides more information about safely viewing a partial solar eclipse here.

A solar eclipse can only happen at the time of new Moon, and in particular when the Moon passes directly between Earth and the Sun. This alignment occurs only occasionally, rather than at every new Moon, because the lunar orbit is tipped about 5° to Earth's orbital plane and so the Moon's shadow usually misses Earth entirely.

"For each of the past three years, amateur astronomers have been able to view a total solar eclipse somewhere in the world," notes Kelly Beatty of Sky & Telescope. "But there won't be one this year, so everyone in a position to see the partial event on January 4th should enjoy it if they can." Click here to view a complete guide to solar and lunar eclipses during 2011.

Sky & Telescope is making the following photo and illustrations available to the news media. Permission is granted for one-time, nonexclusive use in print and broadcast media, as long as appropriate credits (as noted in each caption) are included. Web publication must include a link to SkyandTelescope.com. 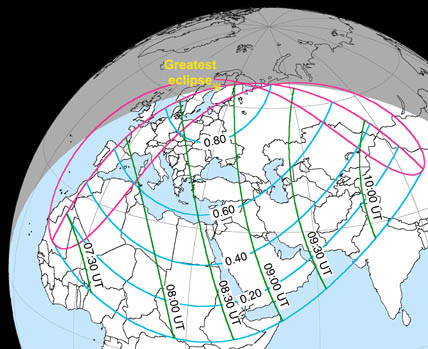 January 4th's partial solar eclipse favors viewers in northern Europe, western Asia, and northern Africa. Blue lines show how much of the Sun's diameter is covered; green lines give the Universal Time for mid-eclipse; pink lines show where the event begins at sunrise (at left) or ends at sunset (at right). Click on the image to view or download a HD-formatted view; click here to view or download a high-resolution global view. 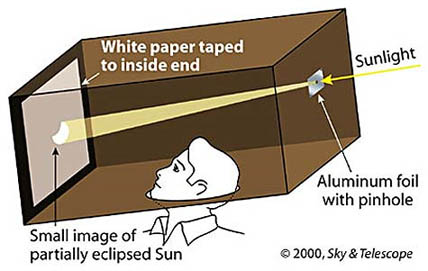 Pinhole projection is the simplest and safest way to observe the Sun. You'll get a great view if you project a sunlight coming through a small hole onto a viewing card enclosed in a long box. The smaller the pinhole, the sharper (but dimmer) the image.

A telescope equipped with a solar filter can show the eclipsed Sun in dramatic fashion. This view was obtained during an eclipse on May 10, 1994, with an 8-inch Schmidt-Cassegrain telescope. Click on the image to view or download a larger version.