Note to Editors/Producers: This release is accompanied by high-quality illustrations; see end of release.

This coming week, four bright planets — Mercury, Venus, Mars, and Jupiter — are gathering low in the eastern sky before dawn. This is the tightest grouping of bright planets that has occurred yet in the 21st century. Every morning just before sunrise, four planets combine to form fascinating and ever-changing patterns.

To see this unusual sky show, you'll need to find a spot with a completely unobstructed eastern horizon.

Those in the Southern Hemisphere can watch the celestial dance with unaided eyes, but from mid-northern latitudes you will need binoculars or a small telescope to appreciate it properly. Go outside 45 minutes before sunrise and scan the eastern horizon until you find a planet. You're sure to spot either Venus or Jupiter first, because these are by far the brightest of the four.

During the nine mornings from May 7th to 15th, Venus and Jupiter, together with much fainter Mercury, create a remarkable triangle in the sky. Mercury is the 3rd-brightest planet in the grouping and quite low in the sky. "Even though Mercury would rival the brightest stars in a dark sky, you'll likely to need binoculars to spot it," notes Sky & Telescope senior editor Alan MacRobert. It tracks Venus's motion, staying a few degrees to the lower left of the brighter planet throughout this period.

This planetary trio is tightest, only about 2° across, on May 11th and 12th. In fact, on the 11th you'll see Venus and Jupiter separated by only 0.6°. "You'll be able to cover both planets easily with a fingertip held at arm's length," says Sky & Telescope associate editor Tony Flanders.

Venus and Mercury remain with 1½° of each other for another week, while Jupiter climbs higher into the predawn sky. By mid-May, you're likely to spot Jupiter before Venus despite the fact that it's less than one-quarter as bright.

A week later, Venus and Mercury create a second planetary triangle with Mars, which is quite faint (just 1/100 as bright as Venus). The triad is tightest, just over 2° wide, on May 21st. Venus and Mars close to within 1° of one another on the 23rd, by which time Mercury has begun a slide toward lower left.

Click here to view a 700-Kb movie of the four-planet dance. After watching the general progression, step forward and back to see the configuration on any particular morning. You may need to install QuickTime to watch the film if you haven't already done so.

Permission is granted for nonexclusive use of the illustrations in any media as long as credit is given to Sky & Telescope magazine. Web publication must include a link to http://SkyandTelescope.com. 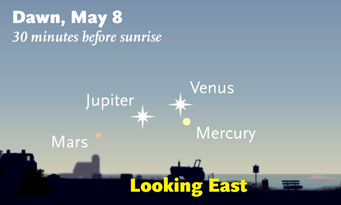 These four bright planets cluster closely together in predawn skies during May 2011. Click here to view or download a high-definition version. 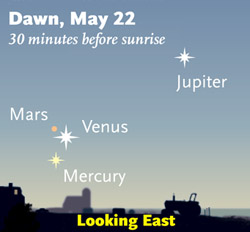 In the last half of May 2011, Mercury, Venus, and Mars huddle tightly near the eastern horizon as Jupiter lurks to their upper right.

Click on the strip above to see an animation of May 2011's four-planet gathering.