If it’s clear late Thursday night, December 13th, 2012, keep a lookout high overhead for the shooting stars of the Geminid meteor shower. “The Geminids are usually one of the two best meteor showers of the year,” says Alan MacRobert, senior editor at Sky & Telescope magazine. “They may beat out the Perseids of August.” This year's showing has the added benefit of reduced celestial competition — thanks to the new Moon, no moonlight will interfere with meteor counting.

Under a clear, dark sky, you may see a shooting star every minute from 10 p.m. local time Thursday until dawn Friday morning. If you live under the artificial skyglow of light pollution the numbers will be less, but the brightest meteors will still shine through.

Lower counts of Geminid meteors should be visible earlier that evening, and a few should also flash into view on the nights of December 11, 12, and 14.

To watch for meteors, you need no equipment other than your eyes. Find a dark spot with an open view of the sky and no glaring lights nearby. Bundle up as warmly as you can in many layers. “Go out late in the evening, lie back, and gaze up into the stars,” says Sky & Telescope editor in chief Robert Naeye. “Relax, be patient, and let your eyes adapt to the dark. The best direction to watch is wherever your sky is darkest, probably straight up.”

If you trace each meteor’s direction of flight backward far enough across the sky, you’ll find that this imaginary line crosses a spot in the constellation Gemini near the stars Castor and Pollux. Gemini is in the eastern sky during evening and high overhead in the hours after midnight (for skywatchers at north temperate latitudes). This special spot is called the shower’s radiant. It’s the perspective point from which all the Geminids would appear to come if you could see them approaching from the far distance, rather than just in the last second or so of their lives as they dive into Earth’s upper atmosphere.

More about the Geminid Meteoroids

The Geminid meteors are created by tiny bits of rocky debris (the size of sand grains to peas) shed from a small asteroid named 3200 Phaethon. Over the centuries these bits have spread all along the asteroid’s orbit to form a sparse, moving “river of rubble” hundreds of millions of miles long. Earth’s annual orbit around the Sun carries us through this stream of particles every mid-December.

The particles are traveling 22 miles per second (79,000 mph) with respect to Earth at the place in space where we encounter them. So when one of them strikes Earth’s upper atmosphere (about 50 to 80 miles up), air friction vaporizes it in a quick, white-hot streak.

This waste can be prevented by installing modern “full-cutoff shielded” fixtures, and by aiming fixtures more downward toward the ground where the light is wanted. These simple steps not only reduce light pollution in the sky but allow great savings of electricity. Says Sky & Telescope’s Robert Naeye, “If 100% of a bulb’s light goes where it’s wanted, instead of only 50%, a bulb with half the wattage does the same job.”

Sky & Telescope is making a publication-quality illustration available to our colleagues in the news media. Permission is granted for one-time, nonexclusive use in print and broadcast media, as long as appropriate credit (as noted in the caption) is included. Web publication must include a link to www.SkyandTelescope.com. 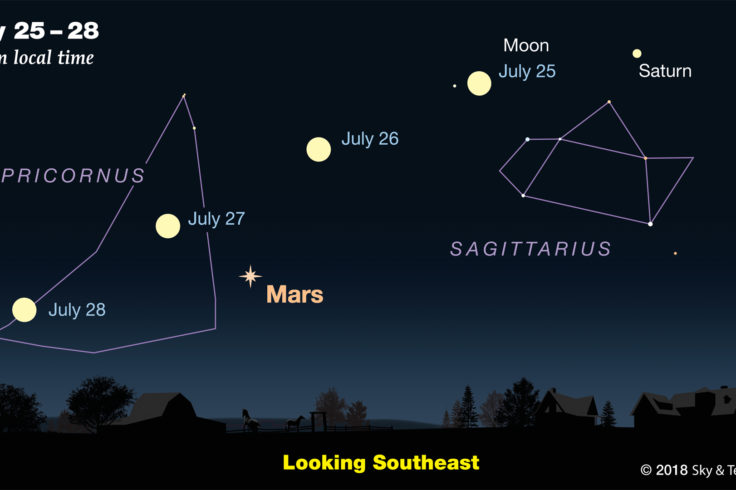 Mars Passes Closest to Earth Since 2003 on July 31st