Note to Editors/Producers: This release is accompanied by a high-quality illustration; see end of release.

This week a greenish, double-tailed smudgeball, named Comet Lulin for the Taiwanese observatory where it was discovered in July 2007, is passing its closest by Earth. You can spot it with a pair of binoculars — if you know where and when to look.

"For the last several weeks the comet has been getting widespread attention as it has grown nearer and brighter. It should be at its best from about February 23rd through the 28th," says Robert Naeye, Sky & Telescope’s editor in chief.

In a very dark, unpolluted, natural night sky — such as few people see any more — the comet is dimly visible to the unaided eye. Even in a more light-polluted suburban sky, however, a good pair of binoculars will do the trick. But you have to know exactly where to look.

The accompanying finder chart shows the starry view high in the east-southeast in mid-evening. You should have no trouble spotting the planet Saturn and the star Regulus in the constellation Leo. They're the two brightest things in the area.

Using those as your guide, aim at the point on the comet's path that's labeled with the current date. The comet's position is indicated for the evening hours on each date for the time zones of the Americas. The orientation of the scene with respect to the horizon is drawn for North America.

You're looking for a very dim, biggish, slightly oval cotton-puff floating among the tiny pinpoint stars. Look carefully, and you may detect the spike of the comet's "anti-tail" pointing toward the lower left. The comet's regular tail is actually dimmer, and it points in almost the opposite direction. In binoculars the whole thing looks more gray than greenish; to see color you need more light. In a large amateur telescope, the color and the comet's structure are a lot more clearly visible.

"I saw it out my bathroom window with 10×50 binoculars," says Alan MacRobert, a senior editor of Sky & Telescope. "It's pretty plain if you get aimed at exactly the right spot."

More about Comet Lulin, its discovery, the reason for its two tails, and detailed finder charts through March are at SkyandTelescope.com/CometLulin.

Sky & Telescope is making the following illustration available to editors and producers. Permission is granted for one-time, nonexclusive use in print and broadcast media, as long as appropriate credits (as noted in each caption) are included. Web publication must include a link to SkyandTelescope.com. 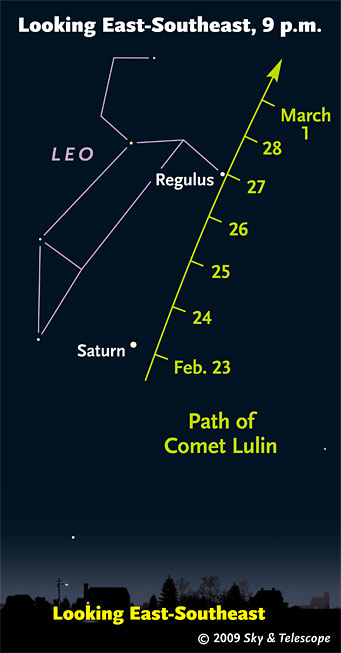 The comet's positions marked are for the evening of the date indicated in the time zones of the Americas. The orientation of the view with respect to the horizon is for North America.

This map can be freely reprinted if Sky & Telescope magazine is credited. Web use must include a link to SkyandTelescope.com.