Note to Editors/Producers: This release is accompanied by a high-quality illustration; see end of release.

Two bright planets will shine close together low in the western twilight from Sunday to Wednesday, March 13th to 16th. Anyone can see them with the naked eye. You’ll just need a clear sky and an open view toward the west roughly 40 minutes after sunset, as twilight fades.

Jupiter is the brighter of the two. “Mercury is pretty hard to spot most of the time, so a lot of people have never recognized it in their lives,” says Alan MacRobert, a senior editor of Sky & Telescope magazine. “With Jupiter guiding the way, now’s your chance.” The graphic here shows where to look. 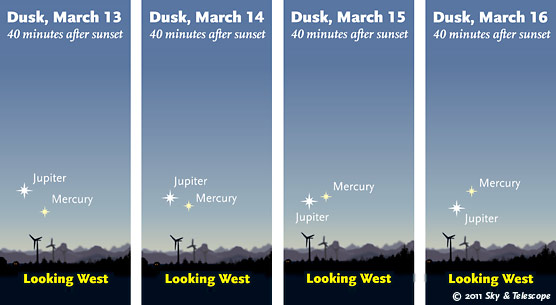 Find a spot with a clear, open view low to the west, and you can watch Mercury passing Jupiter in twilight from March 13 to 16, 2011. Click image for high-resolution version. Feel free to reproduce this illustration anywhere, as long as credit is given to Sky & Telescope magazine. Web publication must include a link to http://SkyandTelescope.com.

Jupiter has dominated the evening sky for several months, but now it's on its way down and out for the season. It'll be gone in another couple of weeks. Mercury, on the other hand, will climb a little higher in the western twilight by late March. (This refers to viewers in the world's mid-northern latitudes, including the United States, Canada, southern Europe, and elsewhere between about 30° and 50° north latitude.)

The two planets will appear closest together on Monday and Tuesday, March 14 and 15, when they'll be only about 2° apart — about the width of your thumb held at arm's length.

Although the two planets appear close together, they’re not. Jupiter is more than 5 times farther away, at a distance of 550 million miles compared to Mercury's 102 million miles. That means the light we see from them takes 49 and 9 minutes, respectively, to reach us.

“Don’t miss this chance to do a little astronomy from your backyard, balcony, or rooftop,” says Sky & Telescope associate editor Tony Flanders. “It’s a big universe, and planets await.”

ILLUSTRATIONS: Here's a high-resolution version of the illustration above:

Here is an animation of the four panels (animated .gif):

Permission is granted for nonexclusive use of the illustrations in any media as long as credit is given to Sky & Telescope magazine. Web publication must include a link to http://SkyandTelescope.com .