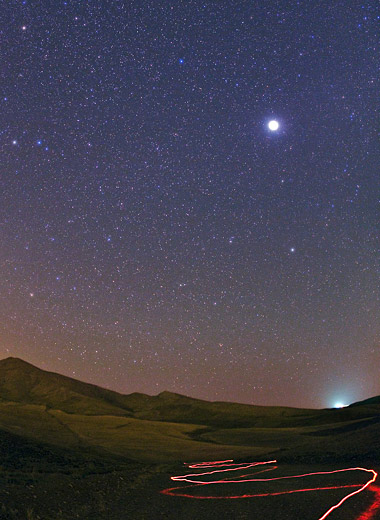 Jupiter among the evening stars. In this time exposure, the red lines were made by the photographer walking toward Jupiter with a red flashlight aimed at the ground. Click here for full-size image and for full-size image with constellations, labels, and inset highlighting bright Jupiter and tiny Uranus.

Permission is granted for free one-time use with the following credit line: Babak A. Tafreshi. Web use must include the following liink:
http://www.twanight.org/tafreshi

For further uses, contact the photographer at
[email protected]

If you look up on any clear September night, a big bright “star” will greet you. It’s low in the east after twilight, and higher in the southeast as the evening grows late. It completely overpowers every actual star in the night sky.

What you’re looking at is the planet Jupiter. “Jupiter is always bright, but if you think it looks a little brighter than usual this month, you’re right,” says Robert Naeye, editor in chief of Sky & Telescope magazine. “Jupiter is making its closest pass by Earth for the year. And this year’s pass is a little closer than any other between 1963 and 2022.”

Jupiter is nearest to Earth on the night of Monday, September 20th: 368 million miles away. But it remains nearly this close and bright throughout the second half of September.

At the closest point of its previous swing-by, in August 2009, Jupiter was 2% farther than this time. At its next pass, in October 2011, it will be a little less than 1% more distant than now. 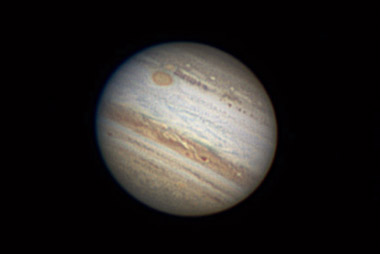 Jupiter as imaged with a large amateur telescope in September 2010. Usually Jupiter shows two wide, dark belts near its equator, but for nearly a year it has displayed only one. Sean Walker, imaging editor for Sky & Telescope magazine, made this image by stacking hundreds of video frames taken with his 12.5-inch-diameter scope. Click for large version.

In addition, Jupiter is an additional 4% or so brighter than usual because one of its brown cloud belts has gone missing. For nearly a year the giant planet's South Equatorial Belt, usually plain to see in a small telescope, has been hidden under a layer of bright white ammonia clouds.

Coincidentally, Jupiter is also passing almost in front of the planet Uranus just now. Uranus is 5 times farther away and almost 3,000 times dimmer, so it’s invisible to the unaided eye and contributes no light to speak of. But binoculars or a telescope will show Uranus less than 1 degree from Jupiter now through September 24th. (You’ll need a detailed chart showing which tiny point of light is it; see SkyandTelescope.com/uranus). 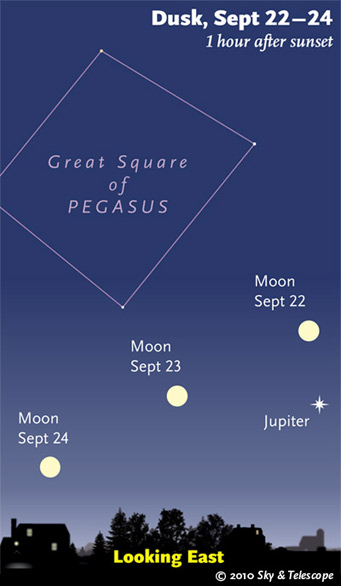 The big, bright Moon shines above Jupiter after dusk on September 22, 2010, then left of Jupiter on the 23rd and 24th.

Credit: Sky & Telescope magazine. Web use must include a link to SkyandTelescope.com.

On the other end of the brightness scale, the full Moon joins this celestial scene around the same dates too — shining above Jupiter on the evening of September 22nd and left of it on the 23rd, as shown in the illustration at right.

More coincidences are also happening here. Jupiter and Uranus find themselves close to the point on the sky known as the vernal equinox, where the Sun crosses the celestial equator on the first day of spring. (“Spring” here means spring in the Northern Hemisphere.)

And, all of this takes place around the date when fall begins in the Northern Hemisphere: on September 22nd. (Fall begins at 11:09 p.m. Eastern Daylight Time on that date.)

What do all these coincidences mean? “Nothing at all,” says Alan MacRobert, a senior editor at Sky & Telescope. “People forget that lots of things are going on in the sky all the time. Any particular arrangement might not happen again for centuries, but like the saying goes, there’s always something. Enjoy the show.”