J. Kelly Beatty, editor of Night Sky magazine and executive editor of Sky & Telescope magazine, has been honored with the 2005 Harold Masursky award for meritorious service to planetary science by the Division for Planetary Sciences (DPS) of the American Astronomical Society. The Masursky Award was established by the DPS in 1991 to recognize and honor "individuals who have rendered outstanding service to planetary science and exploration through engineering, managerial, programmatic, or public service activities." It is the highest honor the DPS bestows upon nonscientists. Beatty received the award this morning at the division's annual meeting, which is being held at Cambridge University, England.

For more than three decades Beatty has reported on planetary science for Sky & Telescope magazine. In that capacity he has written more than 100 feature-length stories along with a seeming endless list of shorter news reports. His work has appeared in newspapers such as the New York Times and Boston Globe, on National Public Radio, and in a host of book chapters. Beatty regularly speaks about science in classrooms and has been an fixture at planetary-science conferences since the 1970s. His most notable achievement, The New Solar System, is currently in its 4th edition and is used as an introductory textbook at universities across the United States.

"I know I speak for everyone here at Sky Publishing in saying that we are proud of Kelly's accomplishments and thank the DPS for honoring him with the Masursky Award. Kelly is an institution here at Sky, and we are thrilled to see him receive the recognition he so aptly deserves," says Susan B. Lit, president/publisher of Sky Publishing Corp. in Cambridge, Massachusetts.

Beatty studied geology, planetary science, and astronomy at Caltech and earned a master's degree in science journalism at Boston University. Keen to nurture the next generation of science writers, he serves as a mentor in Sky & Telescope's internship program, training students to report on science clearly and accurately while inspiring them to share the excitement of scientific discovery with the widest possible audience.

Currently Beatty serves as editor of Night Sky, Sky Publishing's bimonthly magazine for beginning stargazers. Through its pages Beatty shares his passion for astronomy and assures readers that using a telescope need not be intimidating.

Sky & Telescope is pleased to make the following photo available to our colleagues in the news media. Permission is granted for one-time, nonexclusive use in print and broadcast media, as long as appropriate credit (as noted in the caption) is included. Web publication must include a link to SkyandTelescope.com. 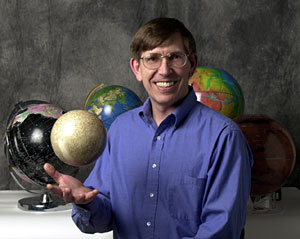 J. Kelly Beatty, recipient of the 2005 Harold Masursky Award for outstanding service to planetary science. Click on the image to download a publication-quality version (904-kilobyte JPEG) by anonymous FTP.

The American Astronomical Society (AAS), established in 1899, is the major organization of professional astronomers in North America. The basic objective of the AAS is to promote the advancement of astronomy and closely related branches of science. Its membership also includes physicists, mathematicians, geologists, engineers, and others whose research interests lie within the broad spectrum of subjects now comprising contemporary astronomy. The AAS has approximately 6,500 members, some 1,200 of whom also belong to the Division for Planetary Sciences.