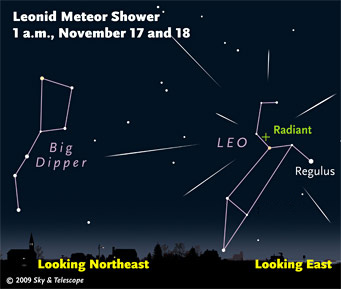 The annual Leonid meteor shower should be reaching its climax late tonight in the U.S., from about 1 a.m. your local time to dawn Tuesday morning November 17th. “Viewing conditions will be excellent, because the Moon won’t be lighting the sky this year,” says Alan MacRobert, senior editor of Sky & Telescope magazine. “You might see 20 or 30 meteors per hour under ideal dark-sky conditions.”

Most people, unfortunately, don’t have a dark, natural night sky anymore. “But even if there’s light pollution in your sky, the brightest meteors will shine through,” says MacRobert. “Just find a dark spot with a wide open view overhead and no glary lights nearby.”

Another point in our favor: Sky & Telescope predicts that the most reliable part of the annual shower will reach its peak when North America is having its prime meteor-watching hours from midnight to dawn.

A second, more intense outburst of Leonids may happen about 12 hours later, during the early-morning hours of November 18th in Asia. There’s only an off chance that some activity from that later burst will still be going on by the time the Earth turns halfway around and the Leonids again become visible from the Americas on the morning of the 18th.

Wherever you are, no Leonids will be visible before the shower’s radiant point (in Leo) rises around local midnight. The “radiant” is the perspective point from which all the meteors would appear to originate if you could see them coming from the far distance. In reality, you see them for only the last second or two of their lives as they plunge into the top of Earth’s atmosphere and burn up in white-hot streaks.

Be sure to bundle up warmly; meteor-watching is always colder than you expect. The ideal equipment is just a comfortable lounge chair, a warm sleeping bag, and a pillow. Just lie back, watch the stars, and be patient. The best direction to watch is wherever your sky is darkest, probably straight up.

Notice the meteors’ flight paths. Only those streaking away from the direction to the constellation Leo, in the eastern sky, are Leonids.

Another, less-known meteor shower is going on simultaneously: the Taurids. They’re sparse but tend to be very bright. If you see a slow, bright meteor heading away from the direction to Taurus, that’s a Taurid.