(This is written for the north's mid-northern latitudes, including U.S., Canada, Europe except north, China, Korea, Japan.) 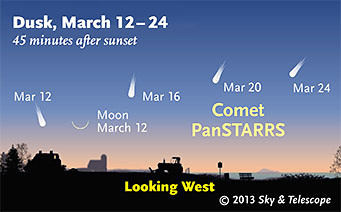 Look for Comet PanSTARRS low in the west in twilight. Don't expect it to appear as obvious as this. Bring binoculars.

Click for publication-quality version. This chart is drawn for viewers in the world's mid-northern latitudes (U.S., Canada, Europe except the north, China, Korea, Japan). Free for general use, but include the credit line Sky & Telescope magazine, and online use must include a link to SkyandTelescope.com .

Look west around the middle of twilight on a clear evening this week, and with a little luck — and maybe binoculars — you might spot a one-time-only visitor newly arrived from very deep space.

Skywatchers have been anticipating Comet PanSTARRS for almost two years. A few days ago it passed closest by the Earth and is now being lit most brilliantly by the Sun. In the past couple weeks it decorated the twilight sky for folks in the Southern Hemisphere. Now people in the world's mid-northern latitudes have their turn.The comet should be at its best March 12–18, possibly just bright enough to spot with the unaided eye in clear twilight if you know exactly where to look.

"Our good views should begin around March 12th and 13th, when the crescent Moon is there to point the way," says Alan MacRobert, a senior editor at Sky & Telescope magazine. "Before then the comet is too near the horizon. It will start fading later this week, so if the sky is clear, don't miss your chance." By March 20th it should be only half as bright as it was seven days before, but on the other hand it will be a little higher and seen through thinner, clearer air. 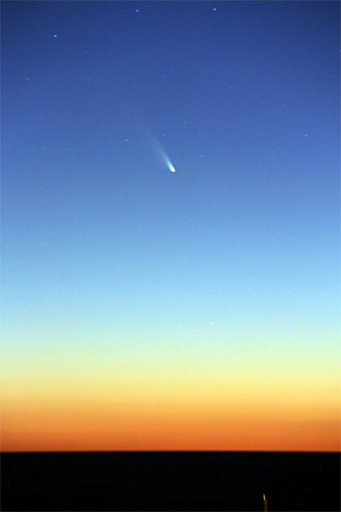 On March 2nd, Comet PanSTARRS was high in the twilight over Montevideo, Uruguay, when Ruben Perez de Paula took this 20-second exposure. Contrast is enhanced. He called it "barely visible to the naked eye, but a very clear and beautiful sight with binoculars." Click for larger view. For publication permission and to negotiate payment, contact the photographer at roperez@adinet.com.uy.

The best time to look is about 30 to 45 minutes after your local sunset time. This narrow window of viewing time comes after twilight fades enough for the comet to show through at all, but before it sinks too low and sets.

On Tuesday March 12th, look for the very thin crescent Moon very low due west. The comet will be just to its left, by two or three finger-widths at arm's length.

On Wednesday March 13th, you'll see a thicker crescent Moon higher up. Look below it by about the width of your fist at arm's length.

On Thursday the 14th, look two fists below the Moon and perhaps a bit to the right.

After that, the comet will gradually move to the right from evening to evening as it begins to fade.

Look for a fuzzy star with a short upward tail. Binoculars will give a much better view. And if you have a telescope, now's the time to bring it out!

The comet is known to astronomers as C/2011 L4 to distinguish it from others named PanSTARRS. The automated Pan-STARRS sky survey telescope in Hawaii discovered it in June 2011 as a tiny, distant speck heading in from the far reaches of the solar system. Even though it's passing closest to us around now, it's still a distant 105 million miles or so from Earth, rather far even by comet standards. That's why it looks small.

"What we're seeing," says Sky & Telescope editor in chief Robert Naeye, "is mostly a huge plume of dust, lit by sunlight, that's spraying from the comet's tiny little nucleus. The nucleus is an icy frozen dirtball just a few miles across. As it comes near the Sun, its surface heats up and some of the ice evaporates, letting loose dust and debris."

Comet PanSTARRS is on an orbit that's bringing it by the Sun for the first time, after it has spent billions of years in the cold of deep space. In the coming months it will fly back out again, never to return.

This is the first of two promising comets for 2013. The other is Comet ISON, which may put on a brighter display in the dawn sky of early December (for more about that one, see SkyandTelescope.com/ison).