Note to Editors/Producers: This release is accompanied by publication-quality graphics and a broadcast-quality animation; see details on page 2. For more movies and animations, or to arrange for an interview with one of Sky & Telescope's Mars experts, please contact Marcy Dill.

Late in August the planet Mars — the most Earthlike world known beyond our own — will pass closer to Earth than it has done in nearly 60,000 years.

Already Mars is blazing big, bright, and fiery yellow-orange in the late-evening sky. You can't miss it. For all of August and September, Mars shines many times brighter than the brightest star in the summer sky. Anyone can see it, no matter how little you know about the stars or how badly light-polluted your sky may be.

In early to mid-August, look for Mars glaring like a bright orange star in the southeastern sky after about 10 or 11 p.m. (local daylight-saving time); in late August after about 9 or 10 p.m.; and in September or later, after twilight fades. Later in the night Mars climbs higher in the sky and shifts over to the south.

There has been some confusion over exactly how much of a record this Mars passage is setting. Roger Sinnott, a senior editor of Sky & Telescope magazine, got to the bottom of the matter, finding 57,617 BC to be the correct date of the last Mars passage that came so close. That was 59,619 years ago (taking into account that there was no "year zero" between 1 BC and AD 1). For the full story, see the Sky & Telescope article "A Mars Record for the Ages" in the magazine's June issue, page 94, and also available online.

We won’t have to wait as long for the next passage of Mars that will be so close. Mark your calendar for August 28, 2287.

However, for all practical purposes in terms of how Mars will look, it came nearly as close in 1988. That year it reached an apparent diameter of 23.8 arcseconds as seen in a telescope; this year it will top out at 25.1 arcseconds wide (the angular size of a penny seen at a distance of 500 feet). And Mars will make another good pass by Earth in October 2005, appearing 20.2 arcseconds wide.

As the world awakens to this year’s Mars event, writes Daniel M. Troiani in the June Sky & Telescope, "a rush not seen since the 1986 visit of Halley’s Comet could overwhelm the telescope market. The event is almost a certainty to fire the public’s imagination as few other astronomical events can."

However, Mars is always a pretty tough target in a telescope. To begin with, it’s only about half the size of Earth. Even at its closest, under high magnification, it will appear as only a surprisingly small, bright ball with some subtle dark markings, possible white clouds around its edges, and perhaps the bright white South Polar Cap shrinking in the warmth of the Martian late spring. The brightest yellow areas visible on Mars are deserts covered by fine, windblown dust. The dark markings are terrain displaying more areas of bare rock or darker dust. Mars rotates every 24½ hours, so you can see it turning in just an hour or two of watching.

To see much detail on Mars, several things all have to be working in your favor. You’ll need at least a moderately large telescope with high-quality optics. (For the lowdown on how to select a telescope wisely, see "Choosing Your First Telescope".) And you’ll need to wait until Mars rises high in the sky, well above the thick, murky layers of atmosphere that hug the horizon. And the atmospheric "seeing" must be good. This is the astronomer’s term for the constant fuzzing and shimmering of highly magnified telescopic images due to the tiny heat waves that are always rippling through the atmosphere. The seeing changes from night to night and sometimes from minute to minute.

More about Mars and its unusual close approach is in the June, July, and August issues of Sky & Telescope and online in Observing > Celestial Objects > Planets.

Graphics and an Animation

Sky & Telescope is making two illustrations, one photograph, and one animation available to editors and producers. Permission is granted for one-time, nonexclusive use in print and broadcast media, as long as appropriate credits (as noted in each caption) are included. Web publication must include a link to SkyandTelescope.com.

Also available is a video news release with broadcast-quality movies and animations showing Mars as seen in a backyard telescope, Mars rotating on its axis to display its diverse surface features, a Mars expert explaining the significance of the red planet's close approach to Earth, and B roll showing adults and kids using backyard telescopes.

Television producers should contact Marcy Dill at 855-638-5388 x143 or [email protected] for more information, or if you miss both of the satellite downlinks noted above. 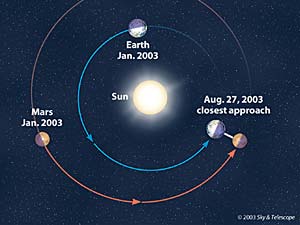 The orbits of the Earth (blue) and Mars (red) around the Sun. Mars moves in a noncircular orbit, and it will be closest to the Sun precisely when Earth moves past it on August 27th. On that date at 5:51 a.m. Eastern Daylight Time, the two planets will be only 34.6 million miles apart — their closest pairing in nearly 60,000 years. The sizes of the Sun and planets are not to scale. Click on the image above to download a publication-quality version (254-kilobyte JPEG) by anonymous FTP. Also available is a QuickTime animation (3.6-megabyte MOV file) showing the Earth overtaking Mars in orbit; it also shows how Mars's visible disk grows and shrinks as the planets move around the Sun throughout 2003. 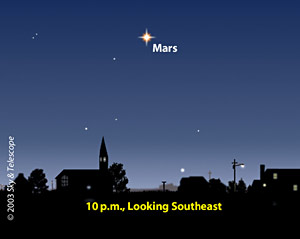 Because it is close to Earth in space, Mars looks like a dramatically bright 'star' in the sky. Mars shines low in the southeast at about 10 p.m. at the beginning of August — but earlier (soon after dusk) in September. It gets higher in the sky and shifts toward the south during the night. Most people notice the planet's yellow-orange hue, which is due to the color of its surface. Click on the image above to download a publication-quality version (60-kilobyte JPEG) by anonymous FTP. Also available is a publication-quality version without the foreground scenery (50-kilobyte JPEG). 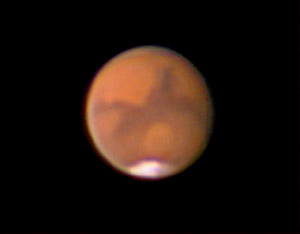 Seen through a backyard telescope, Mars displays a mottled bright and dark appearance. Its surface is covered with rocks and deposits of fine, windblown sand. Also seen is its white south polar cap, consisting of frozen water and carbon dioxide ('dry ice'). This image, from the morning of August 2, 2003, is a composite of about 500 frames of video shot with a Celestron 14-inch telescope and a PlanetCam from Adirondack Video Astronomy. Click on the image above to download a publication-quality version (170-kilobyte JPEG) by anonymous FTP.

Note: The best pictures of Mars by professional astronomers have been obtained from Earth orbit using the Hubble Space Telescope. Here are links to the finest images from 1999 and 2001, the last two times the red planet was well placed for observations: