May 9th's Transit of Mercury: How and When to See It

The Sun won't seem any different as it crosses the sky next Monday, May 9th. But something unusual will be happening: the innermost planet Mercury will be slowly gliding across the solar disk from about 7:12 a.m. to 2:42 p.m. Eastern Daylight Time. Astronomers call such an event a transit, and this will be Mercury's first since November 8, 2006.

Mercury passes more or less between us and the Sun about every four months, but a transit only occurs when the planet passes directly in front of the Sun, as seen from Earth, rather than north or south of it. Given the current tilt and orientation of Mercury's orbit with respect to Earth's, this can only occur in May or November.

Even though Mercury moves fast in its orbit, averaging 30 miles per second, from our perspective the planet will take 7½ hours to cross the Sun's enormous face on May 9th. (The Sun's diameter is 864,300 miles, 109 times bigger than Earth's.)

Because the transit lasts for several hours, most on Earth will be positioned to see at least part of the event. Eastern North America, virtually all of South America, and western Europe and Africa are positioned to view the whole show. For the western U.S., the transit will already be in progress when the Sun rises. For the rest of Europe, Africa, and most of Asia, the transit begins during the day and will still be in progress as the Sun sets.

The table below tells when Mercury's tiny black silhouette first touches the Sun's disk, the mid-time of the transit, and when the last bit of the silhouette leaves the Sun. Note that event times will vary by a few minutes depending on your location. (* = transit begins before sunrise.)

How to View the Transit

Mercury is just 3,032 miles across, less than half the size of Earth, and its disk will be too tiny to see without optical aid. You'll need a telescope equipped with a safe solar filter to see it during the transit. Alternatively, you can use an unfiltered telescope with its lowest-power eyepiece to project an image of the Sun’s face onto white paper a foot or two behind the eyepiece. (Never look directly at the Sun, either by eye or through binoculars or a telescope, without a proper filter. Sky & Telescope's expert tips on how to view the Sun safely.)

The planet's tiny black silhouette will appear only about 1⁄160 of the Sun’s apparent width. Unlike sunspots, which have irregular shapes and grayish borders, Mercury's silhouette will be black and precisely round.

The transit's most visually interesting aspects occur as Mercury makes its entrance onto and exit off the Sun’s brilliant disk. The planet take 3¼ minutes to complete these transitions (its ingress and egress, respectively). Use the plot of the track below to know where to look, and use high power if viewing through a telescope. Note: the diagram shows the celestial north edge of the Sun at the top. When the Sun is in the morning sky its celestial north edge points upper left, so turn the diagram somewhat counterclockwise accordingly.

Just as the last of Mercury’s disk moves onto the Sun, and just before the touches the edge as it leaves, watch for any sign of the "black drop effect": a thin black line that appears to connect the planet to the Sun's edge, maybe making the black dot look slightly water-drop shaped. This effect is real but subtle, caused largely because the Sun’s outermost edge appears dimmer than the rest of its disk.

Next Transits of Mercury

Although transits of Mercury are less dramatic than those of bigger, closer Venus, they occur more often — about 13 or 14 times per century. (The next transit of Venus won't happen until 2117.) The next Mercury transit occurs on November 11, 2019, an event once again visible from the Americas and Europe. The ones after that won't occur until 2032 and 2039 — and these won't be visible from North America. So, after 2019, U.S. observers will have to wait until 2049 for another chance.

Now in its 75th year of publication, Sky & Telescope is recognized worldwide as a trusted, authoritative resource for news of astronomy research, backyard stargazing, and telescopic equipment. Sky & Telescope and SkyandTelescope.com are divisions of F+W, a content and e-commerce company. 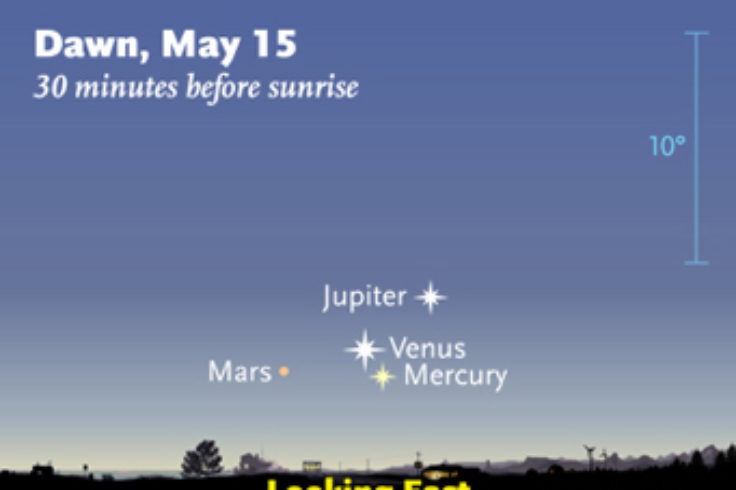