Note to Editors/Producers: This release is accompanied by three publication-quality graphics; see details below.

The Moon sweeps across the planet Saturn on Wednesday, February 20th, for skygazers in North America. The rendezvous occurs in early-evening darkness in the northeastern part of the continent, where it will be visible with or without optical aid (weather permitting). Farther south and west Saturn and the Moon meet in twilight or daylight; in these parts observers should be able to catch the action in small telescopes.

Astronomers call this type of event, when one celestial object blocks another from view, an occultation. Wednesday's occultation happens when the Moon, in orbit around the Earth, crosses the same part of the sky as Saturn, which orbits the Sun. Their meeting is, of course, an illusion. The Moon lies some 388,000 kilometers (241,000 miles) from Earth, while Saturn, 1.3 billion kilometers (830 million miles) away on February 20th, is thousands of times more distant.

The Moon is a bit past first quarter, 55 percent illuminated, when it overtakes the ringed planet. By then the two will have already set in Europe on the morning of the 21st, except for portions of Portugal, Spain, and northwest Africa. But for the eastern United States and the northern Caribbean, Saturn disappears behind the Moon's dark limb (edge) when well up in the south after sunset. It reappears on the bright limb roughly 60 to 75 minutes later. Sky & Telescope has prepared a table listing when Saturn disappears and reappears as seen from 300 North American cities.

The Moon takes roughly two minutes to swallow Saturn from ring tip to ring tip. The event's leisurely pace, combined with the rings' tilt nearly wide open as seen from Earth, means telescopic observers have a rare opportunity to see or photograph the planet's faint C (inner) and F (outer) rings. Titan, the Saturn's largest moon, trails the planet's disappearance by 6 to 8 minutes, depending on your location. Because of its size, Titan should make a gradual, 2-second-long entry behind the lunar limb.

Lunar occultations of bright planets are satisfying visual treats no matter what equipment you use to observe them. Wednesday's event occurs with the Moon and Saturn nestled between the Hyades and Pleiades star clusters in the constellation Taurus, the Bull, providing an attractive setting for naked-eye or binocular viewing.

The Moon will occult Saturn several more times this year, but these cover-ups will be invisible or unfavorable for North Americans. The next series of Saturn occultations does not begin until late 2006, so take in Wednesday's event if you have the good fortune of clear skies that evening.

Sky & Telescope is pleased to make the following graphics available to help the news media explain this week's lunar occultation of Saturn to the public. Permission is granted for one-time, nonexclusive use in print and broadcast media, as long as appropriate credit is given to Sky & Telescope and, for the photo, to Étienne Bonduelle. 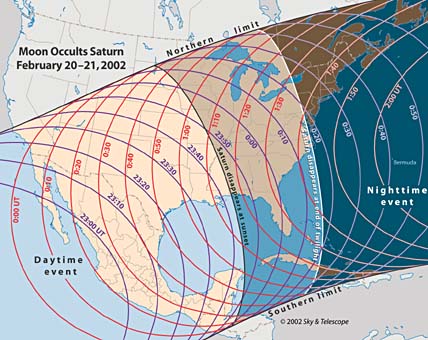 The lunar occultation of Saturn on February 20th favors the East Coast of North America, where it occurs in darkness. Observers farther west will be hampered by twilight or daylight but should still be able to see the planet telescopically near the time of its disappearance. Purple curves give the Universal Times of Saturn's disappearance, red curves its reappearance. Click on the image for a high-resolution, publication-quality version. 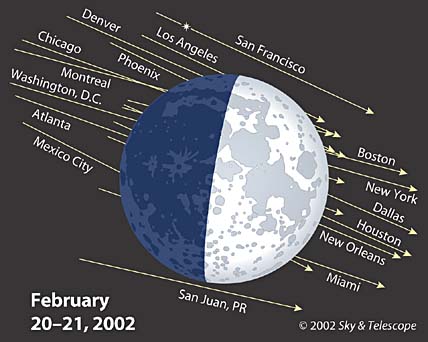 Skywatchers in many North American cities are poised to see the Moon occult Saturn on February 20th, when the planet takes various paths behind the lunar disk. Celestial north is up. Click on the image for a high-resolution, publication-quality version. 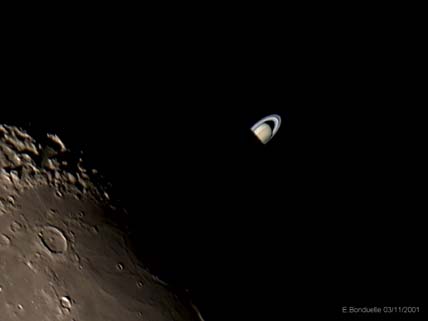 Observing from Cambrai in northern France, Étienne Bonduelle watched as Saturn reappeared from behind the waning gibbous Moon on November 3, 2001. He made this composite image using a Meade 8-inch LX90 Schmidt-Cassegrain telescope and a Philips ToUcam Pro webcam. Click on the image for a high-resolution, publication-quality version.